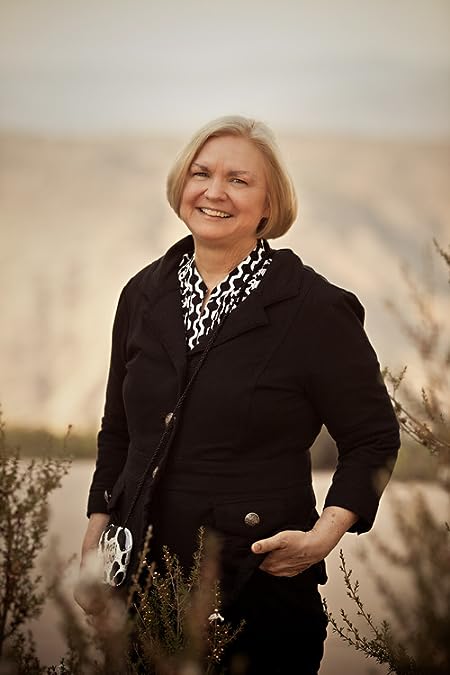 Joyce T. Strand is the author of who-done-it contemporary and historical mysteries set in San Francisco, the Napa-Sonoma wine regions of California, and in Ventura and Ramona, California.

Her contemporary novels, written as stand-alone trilogies, feature protagonists Jillian Hillcrest, a publicist in Silicon Valley; Brynn Bancroft, a financial guru in transition to winemaker from corporate executive, who was Jillian's boss in the Jillian Hillcrest mysteries trilogy; and Emily Lazzaro, the daughter of the winemaker in the Brynn Bancroft trilogy, who has moved to a small California town and become the manager of a bed and breakfast.

Her first historical mystery, The Judge's Story, tells the story of a Superior Court Judge with a passion for social justice as well as the law who strives to discover the truth behind the mystery of a robbery-murder in a small California town in 1939. Her second historical mystery, The Reporter's Story, features a young female reporter in 1912 San Francisco who confronts murder, intrigue, and smuggling on her way to becoming a world-recognized reporter.

None of these sleuths goes looking for crimes to solve, but they are all drawn in when they confront murder, burglaries, and fraud.

All of her novels are inspired by actual events and/or real people, although they are definitely fictionalized.

Much like her protagonist Jillian Hillcrest, Strand headed corporate communications at several biotech and high-tech companies in California’s Silicon Valley for more than 25 years. Unlike Jillian, however, she did not encounter murder in her career. She focused on writing by-lined articles, press releases, white papers, and brochures to publicize her companies and their products and welcomed the opportunity to turn to fiction.

Strand lives with her collection of cow statuary in Southern California, and enjoys exploring and writing about the growing wine region in the Ramona Valley near San Diego.

She received her Ph.D. from the George Washington University, Washington, D.C. and her B.A. from Dickinson College, Carlisle, PA 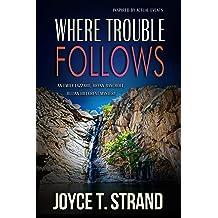 Where Trouble Follows: An Emily Lazzaro, Brynn Bancroft, Jillian Hillcrest Mystery Oct 31, 2020
by Joyce T Strand
( 4 )
$4.99
Jillian Hillcrest is pleased that her friends, Emily Lazzaro and Brynn Bancroft, have joined her in a southern California town to hike a trail in memory of her father. However, instead of a relaxing time, they are hit with a number of setbacks that cause them to keep postponing their adventure. Missing wire transfer and payroll funds at Emily’s B&B, the suspicious death of a friend of Jillian’s mother, and an aggressive investment firm with a doubtful, outrageous proposal—and threat—to Emily’s boss combine to interfere. The three friends—who have all had experiences with kidnappers and attempted murders—sense serious trouble. As they try to get to the bottom of these events, they begin to fear for their very lives.
Read more
Other Formats: Paperback 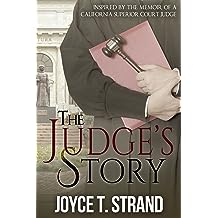 The Judge's Story Jun 23, 2015
by Joyce T. Strand
( 9 )
$3.99
A Superior Court Judge with a passion for social justice as well as the law strives to discover the truth behind the mystery of a robbery-murder in a small California town in 1939.

When the Judge hears testimony against a 14-year-old teenager, he realizes that the boy participated in a robbery-murder. However, the accused did not actually pull the trigger. But unless the boy identifies his partner, the Judge must sentence him as a murderer, which would result in prolonged jail time. The Judge’s investigator, along with the precocious 16-year-old girl who identified the boy as one of the thieves, explore different approaches to uncover the murderer. In the backdrop of escalating war in Europe, the financial scarcities of the Great Depression, and the Judge’s caseload, their attempts to find justice for the accused boy and unmask the killer lure the Judge and his friends into sordid criminal activities. 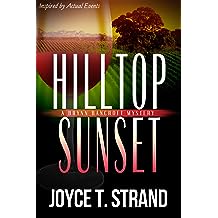 Brynn Bancroft learns that a former employee who beat her nearly to death has returned to stalk her and her friend, Jillian Hillcrest, also a former victim. Recently divorced, Brynn turns to a new love interest only to encounter additional unwelcome issues. Meanwhile, short-timer Brynn, who has resigned from her Silicon Valley company, becomes bored fulfilling her remaining responsibilities there. She begins to prefer supporting the launch of her ex-husband’s new hilltop winery while waiting to move to her next position. Between her stalker and her new love interest, Brynn faces a series of life-threatening events. 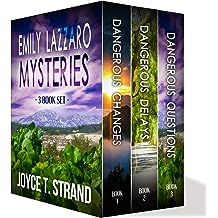 Emily Lazzaro Mysteries 3-book Bundle: Dangerous Changes, Dangerous Delays, Dangerous Questions May 31, 2020
by Joyce T Strand
$5.99
Now available in one e-book volume, all three Emily Lazzaro mysteries; inspired by real California cases.
Included in this 3-book bundle:
Dangerous Changes--Can Emily survive a police investigation, pressure from her ex’s company, and the suspicions of a possible new love-interest—so that she can make the changes to create a meaningful new life in a special town in southern California?
Dangerous Delays--Finding a corpse buried with Native American artifacts wasn’t the first delay of the renovation of the B&B that Emily faced. But she was not prepared for what followed.
Dangerous Questions--Murder or deception? Despite repeated warnings to back off, Emily Lazzaro asks some dangerous questions about the disappearance of her employee from the Mane Stay B&B that she manages.
Read more 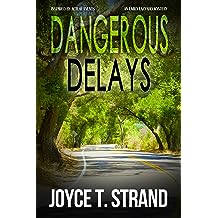 Dangerous Delays: An Emily Lazzaro Mystery Oct 30, 2018
by Joyce T Strand
( 13 )
$3.99
Finding a corpse buried with Native American artifacts wasn’t the first delay of the renovation Emily faced. But she was not prepared for what followed. A murder investigation, excavation to uncover more artifacts, and drug dealers looking for missing product further delay the mansion's restoration into an iconic B&B. While facing these setbacks, Emily is also realizing her growing attraction to a local chef, a man who believes a relationship isn't possible due to his commitment to care for his brain-injured brother.
Read more
Other Formats: Paperback 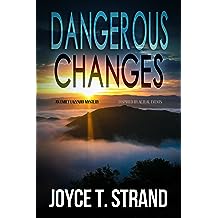 Dangerous Changes: An Emily Lazzaro Mystery Nov 4, 2017
by Joyce T Strand
( 18 )
$3.99
A series of events rattle Emily Lazzaro: a near-death encounter with a pickup truck on a narrow mountain road, the murder of a would-be client, and an ex-fiancé who won’t let go. Can she survive a police investigation, pressure from her ex’s company, and the suspicions of a possible new love-interest—so that she can make the changes to create a meaningful new life in a special town in southern California?
Read more
Other Formats: Paperback 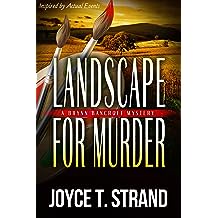 Landscape for Murder: A Brynn Bancroft Mystery Nov 5, 2015
by Joyce T Strand
( 20 )
$3.99
A friend’s murder. An unconnected cast of suspects, including the victim’s missing adult daughter. As if that wasn’t enough, Brynn Bancroft’s winery has been broken into. Can she deal with her co-owner ex and help the police find her friend’s murder so she can finally overcome her own troubled past and enjoy family life with her teenage ward?
Read more
Other Formats: Paperback 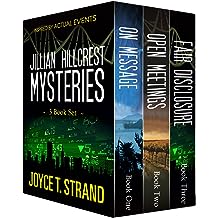 Included in this 3-book collection:

On Message -- PR Executive Jillian Hillcrest solves her first murder at the request of a local police inspector who insists that she holds the key to unraveling the mystery.

Fair Disclosure - Set in the back drop of investor greed. Jillian Hillcrest starts her third mystery when she and ex-husband Chad are enjoying a play at a local community theater and a scream interrupts the production upon discovery of a bludgeoned volunteer.
Read more 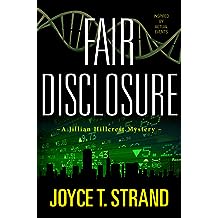 Fair Disclosure: A Jillian Hillcrest Mystery Oct 29, 2013
by Joyce T Strand
( 23 )
$3.99
Jillian Hillcrest and ex-husband Chad are enjoying a play at a local community theater when a scream interrupts the production upon discovery of a bludgeoned volunteer. When it turns out that the victim is someone Jillian interviewed for a job at her company, she becomes involved in another crime, drawn ever deeper by a second murder, an irate investor, the participation of law enforcement amateurs, an increasingly unreliable assistant, and suspicious trading of her company's stock. Meanwhile, Chad is pressuring Jillian to say “yes” to a second marriage. 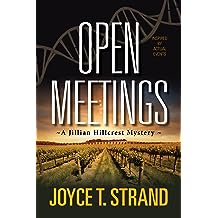 Open Meetings: A Jillian Hillcrest Mystery Jul 18, 2012
by Joyce Strand
( 13 )
$3.99
PR Executive Jillian Hillcrest is having lunch with a reporter colleague when a woman enters and begs him not to print anything she's told him because they will kill her if he does. A few days later, the reporter tells Jillian that the woman was killed in a car crash in his hometown. The police ruled her death an accident caused by driving under the influence of alcohol.

Although Jillian is busy promoting her Silicon Valley biotech company, the reporter draws her into an investigation of his hometown's police department, located in California north of the Napa-Sonoma wine region. Coincidentally, Jillian's neighbor Cynthia Anderson wonders about the untimely death of her policemen husband years earlier as part of the same police department. Meanwhile, Jillian's ex-husband hovers over her to reverse the "ex" status. Unfortunately, none of them anticipates the frightening events that follow.
Read more
Other Formats: Paperback 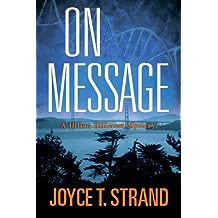 On Message: A Jillian Hillcrest Mystery May 1, 2012
by Joyce Strand
( 31 )
$3.99
Murder intrudes on PR Executive Jillian Hillcrest's routine as head communications executive at a small Silicon Valley biotechnology company. She is eagerly staying on message to inform investors, the media and the community about her company and its products. When someone near to her is murdered, a determined San Francisco police inspector involves her in the investigation, convinced she is key to solving the crime. She co-operates fully only to find that solving a murder is more hazardous than writing press releases. On Message is the first in the Jillian Hillcrest mystery series. As with all the novels in this series, it was inspired by a real California case.
Read more
Other Formats: Paperback