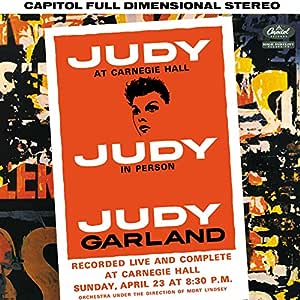 This concert appearance has been called "the greatest night in show business history." The GRAMMYr AwardWinning, live masterpiece, Judy At Carnegie Hall, is now remastered on 180 gram vinyl, with notes by Terrance McNally.

4.8 out of 5 stars
4.8 out of 5
27 customer ratings
How does Amazon calculate star ratings?
Amazon calculates a product’s star ratings based on a machine learned model instead of a raw data average. The model takes into account factors including the age of a rating, whether the ratings are from verified purchasers, and factors that establish reviewer trustworthiness.
Top Reviews

Bruce K. Hanson, author of For the Record: Confessions of a Vinyl- Soundtrack Junkie
5.0 out of 5 stars The One and Only and Still the Winner- Judy at Carngie Hall Remastered on 180 Gram Vinyl
Reviewed in the United States on October 16, 2015
Verified Purchase
I got home from work two hours ago and discovered a package from Amazon at my front door: the new 180 gram vinyl editions of Judy at Carnegie Hall and Miss Show Business. As I listened to the first album I was reading the new introduction by one of my favorite playwrights, Terrence McNally (I was fortunate to appear in his play, "Love! Valour! Compassion!" in Richmond), when I lost track of what format I was listening to. The record is so amazing in its sound quality that it came as a shock to me when I didn't hear Garland's humorous self-deprecating chit-chat in the places I have come accustomed to hearing them on the complete Gold CD version. It is that good! Already in my collection is the limited edition box set with its black cover, a letter from Capitol president, Alan Livingston, and the elusive black and white 8 X 10 photo of Judy. I received a sealed copy of this album a few years ago from my late and dear friend, Robert Gable, who not only was in the audience for Carnegie Hall the night the concert was recorded, but he was also attended Garland's 1951 Palace appearance, her "Judy Takes Broadway" concert, and the 1967 return to the Palace Theatre. I was too young for the 1967 show but enjoyed Mr. Gable's account of Judy's performances through the years. My parents bought me the official release of the album in the late sixties but that copy became so worn from overplaying it (particularly side 4) that I purchased a Japanese a few years ago that I thought, up to that point, was the best sounding version of that recording on vinyl. Not any more! This new edition sparkles with the immediacy of Judy's voice in her best album. In the original album the the orchestra and the sound of the audience are louder while this record gives us Judy with the orchestra behind her and the audience further away. But as Mr. McNally writes in is essay, "Judy Garland gave the single greatest solo performance of all time," and of the album itself, "Take good care of it. It will not come this way again, not in anybody's lifetime." The album is being touted as the Grammy Award-Winning Concert Masterpiece and I think this is a correct description of this recording.
Besides the sound quality, the main difference between the original release and this latest incarnation is that the first featured sides one and four on one record and sides two and three on the other. It is also something of a jolt now to hear the edited applause which was shortened along with the quick but still smooth transitions from one song to another. Those who attended the concert must have been a little annoyed at the omission of Judy's monologues which are so charming.
But I am not complaining. There is no surface sound other than when the needle of my stylus lands on the beginning of the disc. The award winning disc (Best Female Vocalist, Best Album, Best Album Cover) stands up to the test of time with its content and sound quality and is a welcomed edition to my record collection.

kssw88
5.0 out of 5 stars Nothing better
Reviewed in the United States on March 11, 2020
Verified Purchase
Listen to this and you’ll understand why it won album of the year.
Read more
One person found this helpful
Helpful
Comment Report abuse

Amazon Customer
5.0 out of 5 stars Very pleased.
Reviewed in the United States on September 5, 2016
Verified Purchase
I once owned an original copy in the early 70's. This new copy is as close as you can get. Very pleased.
Read more
One person found this helpful
Helpful
Comment Report abuse

audrey blackstone
5.0 out of 5 stars Beautiful Vinyl
Reviewed in the United States on February 8, 2020
Verified Purchase
My friend Loved it. The case it came in was so beautiful.
Read more
Helpful
Comment Report abuse

Kelley H. Noftsger
5.0 out of 5 stars Judy at her best!
Reviewed in the United States on March 5, 2020
Verified Purchase
As amazing as you would hope it would be!
Read more
Helpful
Comment Report abuse

Amazon Customer
1.0 out of 5 stars Wong Record
Reviewed in the United States on May 16, 2019
Verified Purchase
Mine just came in. Externally disappointed. I received a Mumford and Sons record. I surely understand that there is a difference in the two...
Read more
Helpful
Comment Report abuse

Krayon
5.0 out of 5 stars This is ok.
Reviewed in the United States on September 4, 2018
Verified Purchase
Not the item I want to review. I need to talk about book.
Read more
Helpful
Comment Report abuse
See all reviews from the United States

D.M
5.0 out of 5 stars Original live performance
Reviewed in the United Kingdom on January 10, 2020
Verified Purchase
I liked the way it was originally recorded and also a classic especially on vynil.
Read more
Helpful
Sending feedback...
Thank you for your feedback.
Sorry, we failed to record your vote. Please try again
Report abuse

Jacob
5.0 out of 5 stars Great record
Reviewed in Canada on July 28, 2019
Verified Purchase
This was an amazing record! Played well and no damages upon shipping!
Read more
Helpful
Sending feedback...
Thank you for your feedback.
Sorry, we failed to record your vote. Please try again
Report abuse

Page 1 of 1 Start overPage 1 of 1
This shopping feature will continue to load items when the Enter key is pressed. In order to navigate out of this carousel please use your heading shortcut key to navigate to the next or previous heading.
Back
Next
Pages with related products. See and discover other items: judy garland