Bring your club to Amazon Book Clubs, start a new book club and invite your friends to join, or find a club that’s right for you for free.
Explore Amazon Book Clubs
Flip to back Flip to front
Listen Playing... Paused   You're listening to a sample of the Audible audio edition.
Learn more
See all 12 images 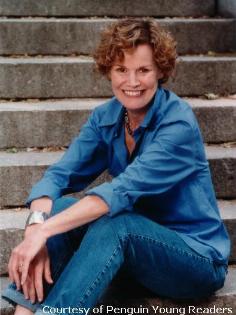 Newcomers and Fudge fans alike will savor this installment in the well-loved series. (Booklist on Double Fudge)

Judy Blume spent her childhood in Elizabeth, New Jersey, making up stories inside her head. She has spent her adult years in many places doing the same thing, only now she writes her stories down on paper. Adults as well as children will recognize such Blume titles as Are You There God? It's Me, Margaret; Blubber; Just as Long as We're Together; and the five book series about the irrepressible Fudge. She has also written four novels for adults, In the Unlikely Event, Summer Sisters, Smart Women, and Wifey, all of them New York Times bestsellers. More than 80 million copies of her books have been sold, and her work has been translated into thirty-one languages. She receives thousands of letters a year from readers of all ages who share their feelings and concerns with her. Judy received a BS in education from New York University in 1961, which named her a Distinguished Alumna in 1996, the same year the American Library Association honored her with the Margaret A. Edwards Award for Lifetime Achievement. In 2004 she received the National Book Foundation's Medal for Distinguished Contribution to American Letters.

Start reading Fudge Series (5 Book Series) on your Kindle in under a minute.

4.9 out of 5 stars
4.9 out of 5
2,413 global ratings
How are ratings calculated?
To calculate the overall star rating and percentage breakdown by star, we don’t use a simple average. Instead, our system considers things like how recent a review is and if the reviewer bought the item on Amazon. It also analyzes reviews to verify trustworthiness.

Samara vega
5.0 out of 5 stars Classic, Still a Favorite Collection for Young Readers
Reviewed in the United States on July 3, 2017
Verified Purchase
This box set was purchased for my 3rd grade son who was constantly requesting new books to devour. These were surprisingly not in his school's library, but I'd grown up with them myself so I ordered them from here.

Judy Blume's knack for writing from the perspective of an awkward preteen is still a goal most authors strive for. The humor throughout is age appropriate, but not so sugar-sweet that it reads like nursery rhyme. It touches lightly on first crushes, the shocking (and oddly hilariously written) death of a pet, and the ever popular theme of sibling rivalry.

The books are just as good as they were in the 80s and 90s. I'd had concerns that the jokes or settings would be dated and feel out of place since the books came out so long ago, but they have held up very well over time. My son followed along just fine, and I personally didn't notice too many overly nostalgic quips that would need to be explained to a modern day youngster.

There's a surprising amount of character development in these young characters as the books progress throughout the childhoods of Peter and Fudge Hatcher, two brothers that love each other, but whose differences in age and personality often result in frustration and amusing conflicts for the reader.

It is VERY important to note that this book series addresses the Santa Claus issue in "Superfudge." If you want your youngsters to maintain their innocence on the topic, do not let them read this particular book in the series until you, and they, are ready. This particular book in the series also touches on light flirting, such as hand holding and little kisses on cheeks. There is a scene where characters are involved in a minor fight as well. It should be noted though, that nothing is introduced that is inappropriate by most family's standards.

This series was and remains a staple classic in children's literature. I highly recommend these books for parents that are struggling to pique their children's interest in reading when most subject matter is unappealing to your young readers.

Amy S.
2.0 out of 5 stars Warning! Do not let your child read Superfudge if they still believe in Santa!
Reviewed in the United States on November 28, 2020
Verified Purchase
I was shocked and so upset when my daughter was reading this out loud to me last night and she was so confused when it got to the part about Santa not being real. There should be a warning on the book. I don't understand why a children's book would have this in it. And it is right before Christmas! So sad!
Read more
14 people found this helpful
Helpful
Report abuse

Stacey Johnson
5.0 out of 5 stars Great books for kids!
Reviewed in the United States on August 11, 2020
Verified Purchase
We are always looking for new books. Now that my 9-year-old daughter is no longer JoJo Siwa obsessed, she doesn't read her JoJo chapter books. My 7-year-old daughter doesn't like to read, but she loves these books! My 9-year-old dove right into them first, and then her little sister got interested. We read these as a read aloud. My kids think Fudge's funny acts of mischief are hilarious! They are entertaining stories. I would say probably a good book for ages 7-12. In Superfudge, there is a tiny bit of romance and a small fight. But that part was not inappropriate for us, and I don't think it is for most families. Would recommend! Very good books!
Read more
6 people found this helpful
Helpful
Report abuse

GermanShepherdMomTop Contributor: Cooking
4.0 out of 5 stars 10 Year Old Niece Loved It!
Reviewed in the United States on December 3, 2016
Verified Purchase
I really enjoyed these books as a child so I purchased this set for my 9 year old niece to encourage her to read and increase her vocabulary. I personally didn't enjoy the "modernized" version, but she did.
Read more
22 people found this helpful
Helpful
Report abuse

H&J Mads
5.0 out of 5 stars Judy Bloom books are always a hit!
Reviewed in the United States on December 1, 2018
Verified Purchase
Having a very Fudge-esque brother himself, my son was delighted to read a book that really got on his level about having siblings that drive you crazy. It helped him have more patience and feel less alone about the age gap between them, too. But then, Judy Bloom has always been able to deliver in a way that makes kids feel understood. Excellent series and a fun read!
Read more
8 people found this helpful
Helpful
Report abuse

cierra green
5.0 out of 5 stars Judy judy judy....love it
Reviewed in the United States on April 24, 2020
Verified Purchase
Let me start off by saying this was my favorite author and still is. I'm almost 30yrs old and this author and these books made for a great child hood.
My children and I can't wait to read them.📙📘📗📕📕📔

P.Magloire
5.0 out of 5 stars Good read for children
Reviewed in the United Kingdom on December 11, 2018
Verified Purchase
My grandaughter loves the books
Read more
Report abuse

Alice K
5.0 out of 5 stars Judy Blume's Fudge Set
Reviewed in the United Kingdom on December 16, 2011
Verified Purchase
I cannot recommend these too highly. My 9 year old daughter had read one at school, and loved it so much we bought the set, and now we are all enjoying them, including my 6 year old son and 50 year old husband! Beautifully and knowledgeably written, these books are full of humour and wit, and also offer a brilliant insight into family life. Worth every penny.
Read more
One person found this helpful
Report abuse

dee
5.0 out of 5 stars Great reads
Reviewed in the United Kingdom on January 22, 2015
Verified Purchase
My daughter is loving these books just as I did. Great reads
Read more
Report abuse

Mr H.
4.0 out of 5 stars Four Stars
Reviewed in the United Kingdom on July 11, 2016
Verified Purchase
Great gift for grandchildren, only downside took over a month to get to them
Read more
Report abuse
See all reviews