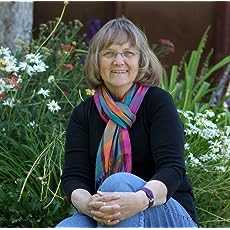 Judythe Morgan traveled a lot as an Army brat then Army wife. She's been a teacher, an antiques dealer, former mayor's wife, and sometimes-church pianist. Mommy to an Old English sheepdog named Finnegan MacCool and a Maltese named Buster, there's always a wild adventure brewing.
Her diverse experiences make her life full, her characters vivid, and her stories authentic and award-winning. Besides fiction, she writes a weekly blog at www.judythewriter.com

Sign up for her free newsletter at https://judythemorgan.com/contact/ to keep up with her latest news and subscriber-only sneak peeks. 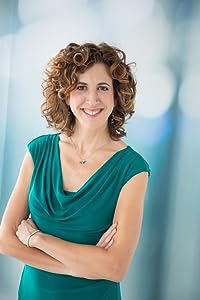 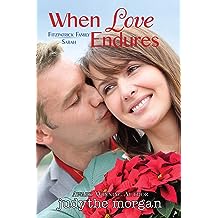 Sarah Fitzpatrick, pianist extraordinaire, gave up on true love when her high school boyfriend, Nick Stephens, ran off to marry his pregnant ex-girlfriend.

Nick’s daughter shows up in her music class eleven years later. One look at the man, and old dreams come back to life. She must find a way to keep the little girl and Nick out of her heart. She won’t risk losing everything again.

Nick Stephens has other plans. Sarah is, and always has been, the love of his life and he’s back in Burton, TX to prove it. But there are secrets Nick must keep, from Sarah and his daughter. Secrets that could destroy everything he hopes to build. 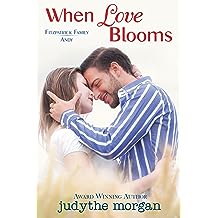 After a hit-and-run accident leaves her mother confined to a special care facility, Darcy Clark abandons her dream of an art career to focus on the family’s struggling landscape business.

At-risk students from her old high school become the labor force on a city park project, and their teacher, Andy Fitzpatrick shows up to supervise his students. The chemistry between Darcy and Andy is instant.

But will a secret link between Andy and her mother’s accident kill the attraction before love can bloom? 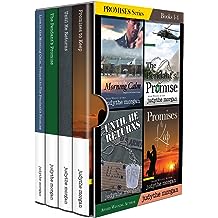 Fate unites three people at Eighth Army Headquarters, South Korea during the turbulent Vietnam War years and their lives are irreversibly united. Promises they make to themselves and each other bind them forever.

These four books of the PROMISES series chronicle the lives and loves of Lily Johnson, Alex Cabot, and David Sands through the decades that followed.

The story idea came from my own days as a Department of Army Civilian at Headquarters, Eighth Army in South Korea. Though the books are completely fictional, actual historical events blend with many treasured memories from my days there.

If you’re military, you will relate. If not, you’ll sympathize.

Book 1 Love in the Morning Calm, Prequel to The Pendant’s Promise
In 1966, while on temporary assignment to South Korea, Green Beret Major Alex Cabot meets Lily Reed at Eighth Army Headquarters. He’s a high-potential career officer, who should resist the temptation of any woman, but he can’t ignore her.

She is a firm supporter of the budding Women’s Liberation movement determined to escape her small hometown’s love-marriage-baby-carriage syndrome for a life of adventure in a civilian job for the Army. Her plans leave no room for any man. No matter how captivating his smile.

In an uncertain time, in a temporary safe zone, yielding to temptation changes both their lives forever.

Book 2 The Pendant’s Promise
When Green Beret Major Alex Cabot is classified MIA, presumed dead, Lily finds herself pregnant and alone. She fabricates a marriage and widowhood to protect her child from social stigma and begins a life of lies.

Her safe world shatters twenty years later when her daughter’s fiancé turns out to be Alex’s godson.

When they meet face-to-face again, the years melt away, the passion returns. But he believes Lily betrayed her promise to wait for him. She’s convinced revealing the truth could cost her the only man she’s ever loved and the daughter she’s lied to all her live.

Can the lies be forgiven, and the pendant’s promise fulfilled, or is it too late?

Book 3 Until He Returns
Shirley Carlson’s husband was Alex Cabot’s best friend and co-pilot when their helicopter went down in Vietnam. He’s been MIA for decades. She filled her life with family, friends, her business, and David Sands’ companionship. Now David wants more. She wants her husband home and buried before she moves forward with another relationship.

David has loved Shirley since Lily Cabot introduced them. He’s patiently waited for her to come to terms with her husband’s death. All he wants is Shirley at his side, as his wife. He proposes before he deploys, wanting her answer when he returns.

Can Shirley abandon her promise to bring her husband home or will she let her new love walk away?

Book 4 Promises to Keep
David Sands lost his wife Shirley three years ago. Debra Hughes lost her best friend and business partner. They both made promises to Shirley before her death.

He promised to sell their condo and donate the proceeds to their foundation supporting families of MIA and POW soldiers. Debra promised to look after David.

As they comforted each other in their grief, and now work side-by-side to close out the estate, their bond grows into mutual attraction.

Will keeping their promises open their eyes and hearts to a future together? 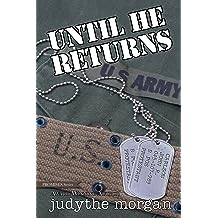 Until He Returns (PROMISES Book 3) Nov 24, 2017
by Judythe Morgan
( 4 )
$2.99
Two men and one woman met at Eighth Army Headquarters, Yongsan, South Korea in the sixties. That fateful encounter bound their lives together forever. All books are standalone stories.
Book 3, Until He Returns

Shirley Carlson’s husband has been MIA in Vietnam for decades. She’s filled her life with family, friends, her business, and David Sands’ companionship. Now David wants more. Only she wants her husband home and buried before she moves forward with another relationship.

David Sands has loved Shirley for years, patiently waiting for her to come to terms with her husband’s death. He’s retiring from the Army. All he wants is Shirley at his side, as his wife. He proposes before he deploys for one last assignment in the Middle East.

Will Shirley make a commitment or will she watch her new love walk away?
Read more
Other Formats: Paperback 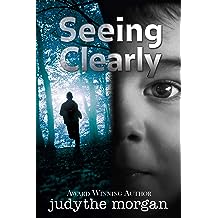 ★★★★★ "Much suspense, especially toward the end, had me sitting on the edge of my seat. I wasn't sure how things would work out .Despite the villains, the story is uplifting and hopeful."-LovesRomance
★★★★★ "I thought I had figured it all out and boy was I surprised at the awesome ending."-TexasCitizen

Evie Parker is forty-seven, a widow and trusting to a fault. She's raising her grandson after her only child and his wife die in a suspicious car accident.

Dawson McKey is thirty-four, a divorced, overly cautious ex-cop, who manages her shipping company. Revenge drives him since his twin sons were killed by a cartel's bomb. He trusts no one.

Drugs appear in a company shipment at the same time mysterious emails threaten her grandson. When the nanny she hired against Dawson's advice disappears with the toddler, Dawson suspects cartel involvement.

A compelling attraction develops. But she's overwhelmed raising the toddler and convinced their age difference will haunt their relationship. Dawson's vowed never to love again, after failing so miserably the first time but being with Evie challenges his thinking.

Can the search for the toddler renew their trust and bring their hearts together?
Read more
Other Formats: Paperback 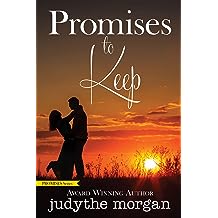 Promises to Keep Nov 11, 2018
by Judythe Morgan
( 8 )
$2.99
Two men and one woman met at Eighth Army Headquarters, Yongsan, South Korea in the sixties. That fateful encounter bound their lives forever. All books are standalone stories.
Book 4 Promises to Keep
David Sands lost his wife three years ago. Still immersed in grief, he procrastinates about his promise to sell the contents of her antiques-filled condominium and donate all proceeds to the non-profit foundation they established to support families of MIA and POW soldiers. For David, selling everything means accepting she’s gone.

Debra Hughes was his wife’s best friend and antiques business associate. Debra’s dealt with the loss of her friend in every way except one: her promise to look after David. Feelings for him, unrelated to loyalty to her friend, have become an emotional liability.

The estate executor requires David to complete the terms of his wife’s will and assigns Debra to oversee the liquidation. As David and Debra labor side-by-side, their bond grows into mutual attraction.

Will keeping their promises open their eyes and hearts to the possibility of a future together? 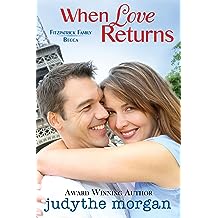 Becca Fitzpatrick fell in love with Ethan Wells at age five. At eight, he proposed. At seventeen, he disappeared and broke her heart. Now family, friends, and adoring students fill her life.

Twelve years later, he returns with a new name - Ethan LaMotte - and a new life in Paris. He claims he’s never stopped loving her.

Although their lives and work are an ocean apart, Ethan won’t lose Becca another time. But will Becca risk her heart again and accept this new Ethan’s proposal? 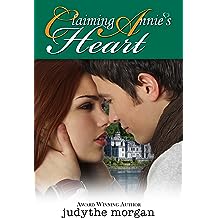 Her first love Chad Jones, whom she believes abandoned her, arrives weeks before the wedding on an undercover assignment probing her fiancé’s connection with IRA terrorists. Chad’s determined to change Annie’s mind and her heart because he’s never stopped loving her.

Which man will claim Annie’s heart? 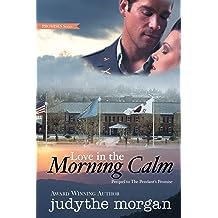 Love in the Morning Calm (PROMISES Book 1) Nov 26, 2013
by Judythe Morgan
( 15 )
$2.99
In the furor of the 60's, when women were fighting for their rights and men the Viet Cong, a young Tennessee preacher’s daughter seeks personal liberation. Lily finds instead a love that defines her even as it forever alters her definition of freedom and liberation.

Green Beret Major Alex Cabot meets Lily Reed, a Department of Army civilian at Eighth Army Headquarters in South Korea. He's is a high-potential career officer, who should resist the temptation of any woman, but he can’t ignore Lily.

In an uncertain time, in a temporary safe zone, yielding to temptation changes both their lives forever.

Book 1 of the Promises Series, Love in the Morning Calm, introduces Lily Reed, Major Alex Cabot, and Captain David Sands. The Promises Series chronicles their lives from the 1960s through the decades that follow. Each book is a standalone story. 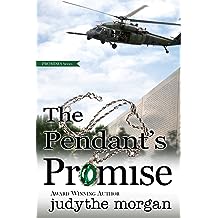 The Pendant's Promise (PROMISES Book 2) May 1, 2012
by Judythe Morgan
( 20 )
$2.99
For twenty years, Lily Johnson’s life, albeit a life of lies, is good. Then her daughter falls in love and Lily's world goes upside down.

Her daughter’s fiancé turns out to be the godson of her daughter’s biological father, Alex Cabot. The Green Beret Lily thought died in Vietnam. When Alex and Lily meet face-to-face, the years melt away and old passion returns.

Only he believes she betrayed her promise to wait for him. And, Lily’s convinced revealing the truth would mean losing her daughter and the only man she’s ever loved.

Can a love, sidetracked by war, be rekindled when the child born from that love feels betrayed or will Lily’s original, well-intended lie cost her the only man she ever loved and her daughter?
--Praise for The Pendant’s Promise—

“This is one of those stories that make you weep and cheer and wonder long after you put the book down.” Mary Buckham, co-author Break Into Fiction

“What a lovely blending of romance and women's fiction!” Joan Reeves, multi-published author 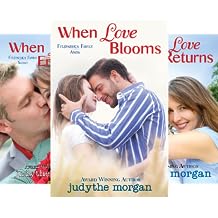