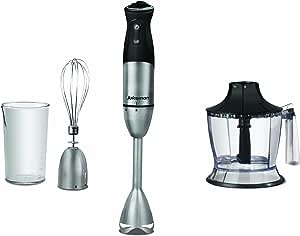 Enjoy nutritious soups, drinks, and salsas ready in seconds with a hand blender, chopper bowl, and whisk attachments. Stainless steel cutting assemblies provide greater durability and power through your prep work with 550-watt of power. Choose the right speed for the job with 5 variable speed settings, plus get an extra burst of power when you need it with the power boost button. Use the blending attachment to make soups directly in the pot or with the beaker for drinks and smoothies; switch to the wire whisk to whip up an easy meringue, then use the chopper bowl for a quick salsa. Comfort and elegance combine with a brushed stainless steel finish and ergonomic soft-grip handle. The 3-cup chopper bowl features a handle and slip-resistant rubber base to make chopping a breeze. Enjoy easy cleaning with a full range of dishwasher safe accessories and get inspired by the exciting recipes in the Use and Care manual. Plus, have the peace of mind of our exclusive 2-year limited warranty.

3.6 out of 5 stars
3.6 out of 5
68 global ratings
How are ratings calculated?
To calculate the overall star rating and percentage breakdown by star, we don’t use a simple average. Instead, our system considers things like how recent a review is and if the reviewer bought the item on Amazon. It also analyzes reviews to verify trustworthiness.
Top reviews

Arthur Aaronson
3.0 out of 5 stars My Miallegro 9090 Mitutto started making a metal on metal ...
Reviewed in the United States on September 26, 2017
Verified Purchase
My Miallegro 9090 Mitutto started making a metal on metal sound after three years of mixing pre-workout and post-workout shakes three times a week. Turns out they don't make it any longer, and when I shopped, I found this. My guess is that Juiceman bought the Miallegro and made a few cosmetic changes and saved money by shortening the chord. This is an identical appearing blender. But whereas the Miallegro had no issue chopping frozen blueberries and fresh apples, this one is leaving a lot of the fruit not blended. I don't understand why, but I am left with chunks in the shake I am trying to drink, not chew.
Read more
One person found this helpful
Helpful
Report abuse

Dixie Vogel
4.0 out of 5 stars Heavy Duty! My first immersion blender
Reviewed in the United States on April 17, 2013
Verified Purchase
Update: Well, eventually the food processing attachement broke. It just needed a small part, but after contacting the company, I found out I cannot buy a replacement part! I still like and use the rest of this setup, but I'm dropping from 5-star to 4-star due the fact that I could not get a replacement for the broken part.

Original review: I did a lot of comparison shopping to select my first immersion blender. I wasn't sure what all I was going to use it for, but decided it would be better to spend a little more than get a shoddy, easily broken one. I'm glad I did.

This this is bigger and heavy than I expected. The power is significant, and the "boost" setting works well. I have been surprised at how often I use the mini-food processor attachment as an alternative to pulling out my huge, regular food processor. (Okay, I like nice appliances. So what? Ha!)

I've had this and used it regularly over a year now.

*Heavy duty and well made. The extra power with this model is noticeable and I've yet to find something this baby cannot address, including ice cubes.

*Easy to operate. The dial for the settings turns easy and the power boost, well, it boosts power! The snap lock of the blender to the stick has little lock and unlock icons and are quite easy to understand.

*No off/on - this could be pro or con, depending on your preference. You hold the button down to make it go, release to have it stop. I would have preferred a switch in addition to the hold button.

*No safety mechanism, meaning the blender will operate even if an attachment is not locked in place. There has been a time or two I've accidentally pushed the "on" button while it was still plugged in, startling myself silly (some would argue sillier).

*Very heavy to hold. It's sizable, much bigger than I expected, and for someone elderly or with weaker hands or wrists for some reason, this could easily be an issue.

All in all, the cons are small, this blender is a stable as the day I got it, and kicks up a significant amount of power with whatever I throw at it. I would certainly buy another and can recommend it to anyone looking for a solid, powerful immersion blender. No regrets a year later.

I have to admit that the blender itself is better than the Braun. It is larger and heavier, but also more powerful and better built. I use it mostly for pureeing soups for my elderly mother. It works great for that except that some food gets caught in the vents and I have to pick that out and re-blend.

My second greatest need was the chopper. That worked well except it is not as well built and I managed to crack it right away when the Juiceman slipped while being attached. The plastic around the center post needs reinforcement.

For my occasional smoothies, it works well on ice and will even grind down cherry pits on high.

The last issue is it is a bit hard to clean under the main blades, but that's not too bad.

**After a little over a year, a small plastic part that attaches the stick blender to the motor part broke while blending down ice. I had not used it for ice in several months, so it was a little disappointing. Now I am down to just having a whisk attachment.

If they sold the attachments separately I would buy a set.
Read more
Helpful
Report abuse

MightyFavog
5.0 out of 5 stars Excellent Hand Blender
Reviewed in the United States on August 8, 2013
Verified Purchase
I use this for mashing potatoes, making soup, and making a frozen dessert consisting of frozen bananas, frozen mango, and fat free organic Greek yoghurt (don't laugh until you've tried one: very satisfying and it keeps me out of the ice cream). I have never tried the other attachments.

It does a pretty good job on potatoes (4 stars), a very good job on potato soup and gazpacho (5 stars), and doesn't die grinding up the bananas and mangos (although it is quite the workout for the cook). It is not designed for this, but my food processor and current blender simply can't do it. So far, the handle gets warm - it takes about 5 minutes to grind up dessert - but it seems to be surviving. I will be getting a Vitamix - at a bazillion times the cost - since it's designed to do this kind of grinding in the future.

It's holding up well under the abuse of making the frozen desert.
Read more
Helpful
Report abuse

DW
5.0 out of 5 stars 9 years still going strong
Reviewed in the United States on July 19, 2020
Verified Purchase
Have used for countless milkshakes, and turning oats into oats flour. Still going strong after 9 years. Will likely buy another one.
Read more
Helpful
Report abuse

Mr Bean 57
5.0 out of 5 stars VERY impressed with this product
Reviewed in the United States on December 27, 2011
Verified Purchase
I bought this for a person I know that is on disability for Christmas. She has to make the most of everything she gets at the store. Well, when she opened it at my place she was so excited. The quality is extremely high, you pick this thing up it is a bit heavy and my first impression is that it is well made. We chopped up some onions for some meatballs, and it chopped them up nice and fine and very uniform... No mushing them. Very happy with this purchase as a gift. We didn't use the whisk so can't say much about that.
Read more
3 people found this helpful
Helpful
Report abuse

vostie
1.0 out of 5 stars Loved it while it lasted
Reviewed in the United States on January 7, 2012
Verified Purchase
We bought this kitchen tool November 2011 and it just died January 2012...a pathetic three months life! It worked wonderfully as an immersion blender for making smoothies until it started to fall apart. First the cover of the wand tool started to slip down while immersion blending was being performed...and then slowly the wand attachment started to slip side to side and no longer lock into place. Two days ago, the wand attachment broke apart. Very disappointing for a tool we expected to use for some time.
Read more
3 people found this helpful
Helpful
Report abuse
See all reviews
Pages with related products. See and discover other items: blender accessories, electric hand whisk, hand blender, stick blender, immersion blender for soups, Immersion Blenders for Soups