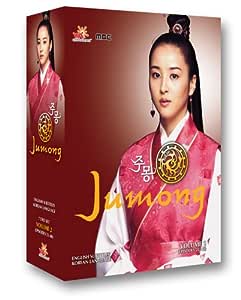 The Legend Continues... Never before has a TV drama series captured the richness and excitement of Korean history quite like Jumong. Follow the paths of Jumong (Song Il-Kook, Emperor of the Sea), Sosuhno (Han Hye-Jin, Be Strong Geum Soon!), and Daeso (Kim Seung-Soo, One Million Roses) as they face the inevitable conspiracies and hardships in bringing freedom to the ancient people of Korea. Sword-fighting competitions, marriage proposals, military attacks, and revelations of significant secrets all await you in Jumong Volume 2 (episodes 21-40). YA Entertainment is honored to present Jumong on DVD with English subtitles, a true cultural phenomenon and a defining event in Korean television history!

It's quite hard to overstate the popularity of Korean martial arts period drama Jumong. This is a show that regularly drew better than 40% of the Korean viewing audience with the final episode drawing more than 50% of viewers - a shocking number - and proved so enormously successful that producers actually altered the story arc mid stream to further expand the story and extend its run. Posts that we made about the show nearly a year ago are still among the most commented on here at Twitch. And not only is it incredibly popular it is also, by all accounts, shockingly good - arguably one of the best Korean television productions ever.... --http://www.twitchfilm.net/archives/009521.html

The story begins in 108 B.C during a time when the Han Empire (China) had recently defeated the Gojosun Empire. With the ancient Korean empire under Chinese occupation, the neighboring Puyo Kingdom was not sure how to proceed. Puyo's King Haeburu (Park Geun Hyung) and his advisors knew that their kingdom could be next. They considered whether or not to make peace with the Han or prepare an offensive. One such man that led the battle against Han occupation was Haemosu (Hur Jun Ho). He was the leader of the Damul Army, a resistance group formed in the downfall of Gojosun. At first, Haeburu had no intention of helping Haemosu, but the Han instead. However, when Haeburu learned that his son Kumwa (Jeon Gwang Ryeol), the Royal Crown Price, was best friends and comrades with Haemosu, he decided to invite Haemosu into his ranks. But when it came to the king's attention that Haemosu's popularity was outgrowing his own, Haemosu became a target by the state and was killed. --http://www.dvdtalk.com/reviews/read.php?ID=28331

4.2 out of 5 stars
4.2 out of 5
16 customer ratings
How does Amazon calculate star ratings?
Amazon calculates a product’s star ratings based on a machine learned model instead of a raw data average. The model takes into account factors including the age of a rating, whether the ratings are from verified purchasers, and factors that establish reviewer trustworthiness.
Top Reviews

More action packed sword fights and double dealing. All in the beautiful locations and buildings that we have come to expect from this drama series. This volume has engagements and thrills. You don't want to miss a moment of this continuing drama. This drama really is hard to describe. It's the time of Kings and Queens. It's everything and more that you would expect from a historical drama. You will feel transported to this place. And the clothes are so beautiful. I hope some of this information helps you, even if in a small way. I write reviews for dramas and CDs from Korea, Taiwan, China, and Japan. If you want to see more of my reviews click on my name at the top. THERE'S A DRAMA FOR THAT

HDScoot
5.0 out of 5 stars Great
Reviewed in the United States on September 26, 2009
Verified Purchase
Started watching the Korean dramas on TV and was looking for a good one to buy. Checked the reviews on Jumong and purchased Volume 1. I enjoyed it so much that when I started the last cd I got back on line to Amazon and ordered the remaining 3 Volumes (2-4). Expensive? Yes! But for me, it was well worth it. Fact is, it was very hard to stop once I got started, but getting up way before dawn, I had to force myself to stop each night. Needless to say, a few weekends not much got done around the house. Well, I did take a putt over to my HD dealer for morning coffee on Saturday mornings b'fore starting up the day watching more episodes.

A few days later I started back at Volumn 1 and since I knew the characters, things made more sense (to me). I'll be watching this series completely through again in the future. Oh yeah, one nice thing is that there are a couple of booklets provided. I read part of them at first, but read them through once I completed the last volumn. One other item I really appreciated is that the captions in English were on long enough for me to read. I've never like captions in the past, but I've enjoyed the Korean dramas so much that I've gotten used to and appreciate them being there (wouldn't understand a thing otherwise).

If you like these types of dramas, you will not be disappointed with this one.
Read more
8 people found this helpful
Helpful
Comment Report abuse

R. Murphy
5.0 out of 5 stars Korean Television
Reviewed in the United States on December 8, 2011
Verified Purchase
I love Korean television shows. They are so well done. Jumong is particularly excellent. Not only does it have that authentic look, but it is fast paced and exciting. Korean shows are emotional and heartfelt without being over done. The characters are interesting and you always want to know what will happen next. I wish American tv had half the soul of these shows. Jumong is one of the best of the best.
Read more
One person found this helpful
Helpful
Comment Report abuse

bonbon
5.0 out of 5 stars Love Korean dramas!
Reviewed in the United States on November 26, 2012
Verified Purchase
These are great to watch when you've had too much sex and violence from American TV. I loved this entire series. It was worth it to watch all four volumes. I dreamed about archery after watching this.
Read more
Helpful
Comment Report abuse

Kathleen Santos
5.0 out of 5 stars I love this series
Reviewed in the United States on July 17, 2013
Verified Purchase
This series is long --- 80 episodes. But I never found it to be boring, it has always engaged me. While it's engaging and exciting, I have to admit that it drags sometimes. It's so obvious that they tried too hard to extend the series.
Read more
Helpful
Comment Report abuse

Laura Kiri
5.0 out of 5 stars Love, love, love.
Reviewed in the United States on October 14, 2013
Verified Purchase
The best of the best. Beautiful story, beautiful people. My husband and i are not Oriental but after watching this we wish we were Korean.
Read more
Helpful
Comment Report abuse
See all reviews from the United States
Pages with related products. See and discover other items: korean tv dramas