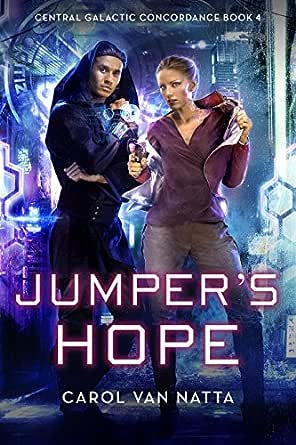 You've subscribed to Central Galactic Concordance! We will preorder your items within 24 hours of when they become available. When new books are released, we'll charge your default payment method for the lowest price available during the pre-order period.
Update your device or payment method, cancel individual pre-orders or your subscription at
Your Memberships & Subscriptions
There was an error. We were unable to process your subscription due to an error. Please refresh and try again. 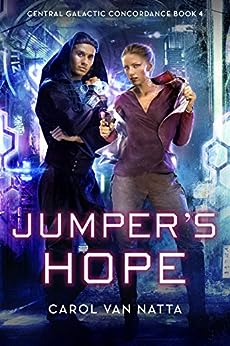 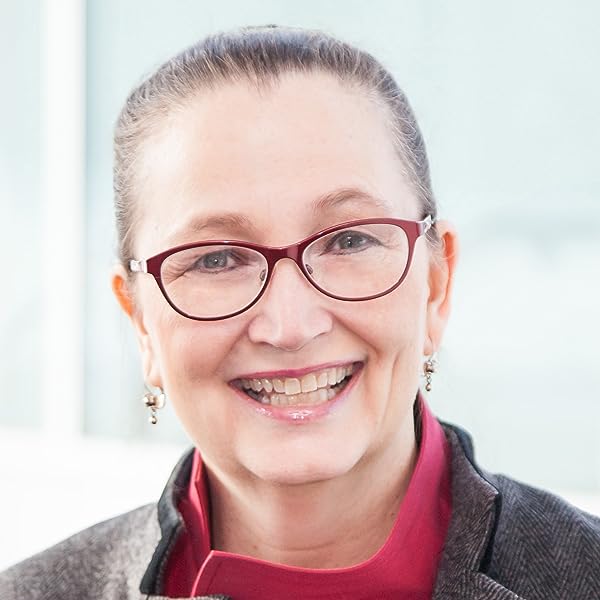 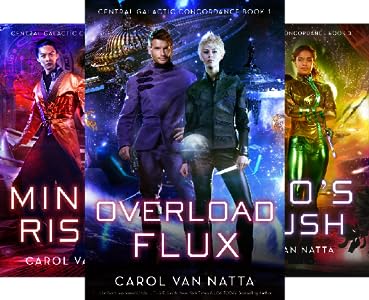 4.8 out of 5 stars
4.8 out of 5
47 global ratings
How are ratings calculated?
To calculate the overall star rating and percentage breakdown by star, we don’t use a simple average. Instead, our system considers things like how recent a review is and if the reviewer bought the item on Amazon. It also analyzes reviews to verify trustworthiness.

Catherine MackayTop Contributor: Classical Music
5.0 out of 5 stars An excellant and engrossing series
Reviewed in the United States on April 11, 2017
Verified Purchase
Beware, spoilers ahead in this review. Once again Carol Van Natta has outdone herself in Jumper's Hope - the action seldom lets up as ex-Jumper, Kerzanna Nevarr and ex-Kameleon Corps operative, Jess Orowitz go on the run from psychotic Davidro (a CPS agent whose activities are not, strictly speaking, sanctioned by the Citizen Protection Service) and his collection of minder 'pets' and hired mercs. Kerzanna and Jess are ex-lovers, both of whom are led to believe the other is dead, but in a strange twist of fate they find out that 1) They are definitely not dead and someone has been tampering with their memories, and 2) They have been living on the same planet. Jess, using his Kameleon talents, quickly figures out that someone is trying to kill Kerzanna and they both ship out on a cruise-liner. Unfortunately, when Davidro wants someone dead, he'll move the kitchen sink just to find you and kill you. So begins a cat and mouse game that will either end in Kerzanna and Jess' death or them living long enough to play their role in beginning a series of events that could bring humanity to it's knees as out-lined in the Ayorinn Prophecies.
One of the things I really love about this series is the characters - they're quite memorable, even the bad guys (let's just say, I wouldn't want to ever cross paths with Davidro - the man is just plain ghastly). I also like the way Carol has been slowly unravelling more of the Concordance universe as the story progresses, revealing how corrupt the CPS actually is especially in the way they treat Minders (those with telepathic, telekinetic, cleaner, sifter and other types of psychic abilities). The Concordance universe is a fascinating and diverse place that I definitely wouldn't mind visiting, supposing that it was real, that is. Looking forward to more stories, memorable characters and great action in the next book, which I hope is not too far away :)
Read more
3 people found this helpful
Helpful
Comment Report abuse

Merry
5.0 out of 5 stars I LOVE this series!
Reviewed in the United States on November 13, 2016
Verified Purchase
**I received a free copy of this book from the author in exchange for an honest review.**

Jumper's Hope is the 4th book in the Central Galactic Concordance series, which starts with a spaceship crash landing. This fateful (or is it?) event leads to the reunion of Jess and Kerzanna, the hero and heroine, who each thought the other had died four years ago. It was impossible not to like these two, and I was with them all the way.

The fast-paced, kickass action then leads them away from Jess's quiet farm life on Planet Branimir into their epic battle for survival from an attack on the Faraon Azul intersellar ship, along with other goodies and baddies crew members (not to mention a couple of other
delightful passengers).

Continuing from Book 3, Pico's Crush, we again get caught up in Dixon Davidro's complex web of pure evil and gruesome cruelty, along with his right-hand man, the enigmatic and surprising Mr Renner and some of Davidro's other talented "pets". Along the way, Jess and Kerzanna meet some fascinating and endearing secondary characters who prove to be powerful allies. I would have loved to learn more about Neira Varemba and Tuzan, but what is revealed is an enticing and integral part of the story.

As the overall story arc progresses and reveals itself, the author has very skillfully provided such detailed and descriptive world building that, for example, I can actually imagine myself living in the at once nasty and appealing city of Ridderth where some of the story takes
place.

Each time I finished reading the latest book in the CGC series, I've always thought it was my favourite so far, and Jumper's Hope is joyously no exception. I just love the imaginative technology in the CGC world and the dizzying power and diversity of amazing skills the
series' "minders" and "jumpers" possess.

I can't wait to see where this series takes me. I can clearly imagine the awe-inspiring potential and scope, even though I have no idea what will happen next. That's exciting. I thoroughly recommend this series to science fiction fans. The romantic element is necessarily minimal to make way for the unrelenting action, but it is there. And it's warm and fuzzy, despite some uncertainty, so I really hope we'll see more of Jess and Kerzanna.

MLJR
4.0 out of 5 stars Another great addition to the series!
Reviewed in the United States on November 7, 2016
Verified Purchase
I've really been enjoying Carol van Natta's SF series: a mix of romance, suspense, and SF fun, with us learning more about the CPS and their corruption and manipulation with every volume. In this book we get two characters who have been very damaged by the work they patriotically volunteered to do, and it literally starts off with a bang (well, a crash) and doesn't slow down from there. My one small disappointment was that we didn't get to see more development regarding the romance; since the characters had already been in love several years ago before they were separated, they already had a strong foundation there that they just picked up again.

Very much recommended--but start with the first book in the series to fully appreciate what the bad guys have been up to!
Read more
3 people found this helpful
Helpful
Comment Report abuse

Abookanight
4.0 out of 5 stars A good rebound from a lagging series' middle
Reviewed in the United States on August 3, 2017
Verified Purchase
Reunited lovers have to overcome their scarred pasts or thinking they watched the other die to survive the here and now. Non stop action with a little romance and great world building are the hallmark of Carol Van Natta's concordance series and in this fourth book she does not disappoint. She picks up from the lag in the series, Pico's Crush almost made me put the series down, and I am glad I tried this one. More corruption from the CPS and deep characters struggling with the CPS legacy. I enjoyed the Kameleon and jumper story lines which gives more insight into these 'professions'. I am definately back on board with this series and waiting for the next.
Read more
One person found this helpful
Helpful
Comment Report abuse

Kindle Customer
5.0 out of 5 stars This series will grip you and not let go.
Reviewed in the United States on December 10, 2019
Verified Purchase
This series is keeping me on the edge of my seat, and still giving hope for the characters and their world as much of a mess as it use the characters are small, bright lights against a seemingly impenetrable dark future, yet you know they will find a way. I can hardly wait for the next installment!
Read more
One person found this helpful
Helpful
Comment Report abuse
See all reviews

Christopher Leach
5.0 out of 5 stars Great stuff
Reviewed in the United Kingdom on June 15, 2018
Verified Purchase
The story is unfolding nicely with well developed characters. I enjoyed all of the books and have re-read them a few times, some good cliff hangers in the last book that I am hoping will be dealt with in the next book.
Read more
Report abuse

Liz
5.0 out of 5 stars Recommended!
Reviewed in Canada on November 4, 2016
Verified Purchase
Jumper's Hope, the fourth in Van Natta's Central Galactic Concordance series, keeps a firm grip on the original world building in its predecessors while expanding in to new characters and adventure. I found it delightfully action filled and loaded with surprises I didn't see coming though they made complete sense when the story threw me in to them.

I loved that her crop of bad guys is even more endearing and creepy than we first ran in to them. (How does she do that?)

Also, and I'm going to put this out here, Van Natta is a master at making you fall in love with her characters entirely by showing them to you through the eyes of another. She fills her characters with so much empathy and understanding of each other, as I reader I felt completely immersed in their relationships so when the bad things happened (and the did) there was a fantastic double (triple) whammy of worry for everyone.

L
5.0 out of 5 stars Love the CGC universe
Reviewed in Canada on October 22, 2018
Verified Purchase
Overload Flux is still my favourite in the series - pretty hard to beat Mairwen as a lead character. Jumpers Hope though was truly excellent. A good blend of likeable and relatable characters, action, and romance. A nice balance of a complete book with more info and complexities of the world revealed, leaving you wanting to know more about the legacy. Also really want to know more about Renner and Char please!
Read more
Report abuse

MarieGP
5.0 out of 5 stars Five Stars
Reviewed in Canada on July 1, 2017
Verified Purchase
Another story in the Galactic Concordance universe and another piece in the puzzle of the forecast. As always it is well written, has action and emotion. I can't wait for the next one.
Read more
Report abuse
See all reviews