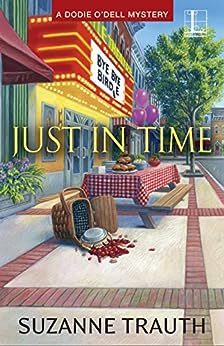 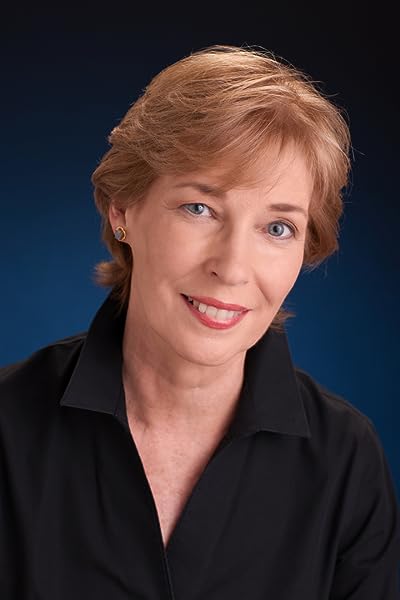 by Suzanne Trauth (Author) Format: Kindle Edition
Book 4 of 6: A Dodie O'Dell Mystery
See all formats and editions
Sorry, there was a problem loading this page. Try again.
FACE THE MUSIC

Business is humming at Dodie O'Dell's Windjammer Restaurant, where she offers theme menus connected to the Etonville Little Theatre’s amateur productions. This June, the theatre is collaborating with the neighboring Creston Players to stage Bye Bye Birdie under the stars—their first musical! There's a contest in the play to pick a fan to receive rock idol Conrad Birdie's last kiss before he ships off for the Army, so Dodie plans a contest to pick the food for a pre-show picnic.

But before the show opens, Ruby, the rehearsal accompanist, is found dead in her car. Why would anyone murder the crusty old gal who loved to sneak a smoke and a nip between wisecracks? Once again, the resourceful restaurant manager must play the part of amateur sleuth, accompanied by Police Chief Bill Thompson, who also happens to be her beau. Confronted with a chorus of suspects, she'll need to stay composed to catch the killer—or it'll be bye bye Dodie…
Read more
Previous page
Next page

Next 3 for you in this series See full series
Total Price: $23.97
Books In This Series (6 Books)
Complete Series
A Dodie O'Dell Mystery
Kindle Edition
Page 1 of 1Start OverPage 1 of 1
Previous page
Next page

Born in Cincinnati, Ohio, Suzanne Trauth taught in college theatre programs for many years before beginning her writing career. Her novels include What Remains of Love and the Dodie O'Dell Mystery Series including Show Time, Time Out, Running Out of Time, Just in Time, No More Time, and Killing Time. Her plays include Laws of the Universe, La Fonda, Françoise, Midwives, Rehearsing Desire, iDream, and Katrina: the K Word. Her screenplays Solitaire and Boomer Broads have won awards at various festivals and contests, and she wrote and directed the short film Jigsaw. Ms. Trauth has co-authored Sonia Moore and American Acting Training and co-edited Katrina on Stage: Five Plays. She is currently a member of Writers Theatre of New Jersey Women Playwrights program, the Dramatists Guild, Mystery Writers of America, Sisters in Crime, and the League of Professional Theatre Women. When she is not writing, Suzanne coaches actors. She lives in Woodland Park, New Jersey.

Thomas Sweeney
4.0 out of 5 stars Always fun to spend time with Dodie O'Dell
Reviewed in the United States 🇺🇸 on August 15, 2022
Verified Purchase
It's like getting together with old friends. I had to hold back a star because I unfortunately figured it out before the end, but still...can't wait to start book 5.
Read more
Helpful
Report abuse

Lane
5.0 out of 5 stars Again the play and the restaurant are a perfect match.
Reviewed in the United States 🇺🇸 on March 27, 2019
Verified Purchase
Just in time
Loved Dodie and the people of Eatonville.
And this book’s play- Bye Bye Birdie - is terrific as is the mystery.
Can’t wait to read the next one.
Lane Mellilo
Read more
Helpful
Report abuse

vegas92(AnyGoodBook)Top Contributor: Crochet
VINE VOICE
4.0 out of 5 stars Bye, Bye, Dodie...
Reviewed in the United States 🇺🇸 on October 1, 2018
Dodie O'Dell works at the Windjammer Cafe, and is helping with the Etonville Little Theater's latest production, Bye, Bye, Birdie. They're performing with members of nearby Creston's theater group, and all seems to be coming together at first. But soon it's apparent that there is trouble with the cast that keeps things from running smoothly. The director Walter is unhappy that the woman he's enamored of, Lola, is involved with another member of the crew, Dale Undershot. Pauli, a local teen who's a whiz on computers and technology, is hankering for Janice, who plays the lead, but she seems to only have eyes for Romeo, who's playing Conrad Birdie. And so it goes...

However, an elderly woman from Creston, Ruby Passonata, is the pianist and she's a genius at it but not very nice to the people around her. In fact, there isn't anyone who wants to spend time with her and after seeing Dodie and her boyfriend Bill, who's the police chief of Etonville, she makes a cryptic remark about relationships that Dodie just doesn't understand. When Ruby dies in what at first appears to be an accident but is soon discovered to be an attempt at hiding a murder, Bill is stumped and asks Dodie to keep her ears open and see if she hears anything about the Creston Players that could hint at who wanted to kill Ruby.

When Dodie and Lola venture out to Creston to Ruby's apartment to see if she has the cue notes needed for the play, they don't expect it to be so clean, Dodie finds a scrapbook that Ruby kept which details her early years, is surprised to find Ruby went to a prestigious music academy, and traveled world wide playing. But the scrapbook mysteriously ends in 1969 and Dodie wants to know what stopped Ruby. So she decides to try and find out why Ruby stopped her burgeoning career and wound up playing for a small town theater group. So Dodie sets forth merely to find out more about the reclusive woman, but doesn't realize that in doing so she might be putting her own life in danger.

First off, I have to say that this is the first book I've read of Ms. Trauth's, yet because it is the fourth in the series I rather expected more from the author. I knew very little about the numerous characters and they seemed way too quirky for me. In most books there is only one person who is quirky, but in this book everyone except Bill seems to be a little bit over the top in that area. The other thing that bothered me is the way like, Pauli like, talks. He sounds like a Valley girl. I would have enjoyed his character more if he could actually form complete sentences once in a while.

While I knew who the killer was almost immediately, (to be fair, though, I read a lot of mysteries, so unless it's hidden well, I can usually figure it out just by something that's said or done early on), it was still interesting to me to learn the reasons why they wanted Ruby dead. Bits and pieces were strewn throughout the story, so you didn't learn it all at once, and that's always a good thing.

The plot was done well, and I thought that everything came together nicely in the end; there were a couple of harrowing moments for Dodie, but she bore them out decently and I have to say that I enjoyed the ending, giving us a promise of what is to come in future books. Recommended.
Read more
Helpful
Report abuse

It’s a story of the adventures of Dodie O’Dell, manager of the Windjammer Restaurant, juggling her “regular” job which includes not only her regular duties but also coordinating the contest meals, the concession stand for the musical and keeping her boss, Henry, happy and the new sous chef who seems to be exuberantly happy all the time reeled in

There is a combined production of the Etonville Little Theatre’s (know at the ELT) and the neighboring Creston Players to doing an amateur productions of Bye Bye Birdie. The musical is to be staged in Etonville, which is a big deal for the whole town. Dodie devises a plan to connect with the musical by convincing Henry, the owner of Windjammer, to having contests through planned menus at the restaurant that will pick the food for a pre-show picnic by popularity. The meals and the contest are a big hit in – thanks in part to the enthusiastic new sous chef, Wilson - a recent culinary school graduate from Haiti.

When the rehearsal accompanist, Ruby Passonata who is part of the Creston Players, dies in her car along the side of the road from apparent carbon monoxide poisoning, the show takes somewhat of a tail spin trying to find her replacement at such short notice so close to the show’s opening. The show seems to be saved with Alex Milken, musical director, steps in and says he will take on that role along with his own.

When Dodie starts hearing so many conflicting statements from what she had seen and heard from Ruby herself in their short time together, it makes her wonder that maybe Ruby didn’t just accidently die. Was it a case of her death having some help? Was she MURDERED? With the help of her beau, Etonville Police Chef Bill Thompson (former NFL running back), and BFF Lola Tripper, and Pauli (BFF Carol’s son – Carol owns the local rumor center the Snippet Salon), Dodie finds many details of Ruby’s previous life – including that she was a child musical prodigy - and clues point to the facts she was indeed murdered. Now they just have to find out by who!

Reading JUST IN TIME trying to solve the crime and proving who did it make this book a page turner in a well-executed cozy mystery that will have pulling for Dodie - not only for her crime solving talents but also in the romantic interest with Bill, falling in love with Wilson and his joy for living and listening for the legendary whistle of Penny Ossining because the show must go on. Although it’s the fourth book in the series, I had no trouble as a first time reader of this series, in jumping in learning who was who and staying up to speed at all. I highly recommend this book to those that love cozy mysteries that keep you on your toes keeping you guessing and second guess up to the very end with a touch of romance. You won’t be disappointed!
Read more
Helpful
Report abuse
See all reviews
Report an issue
Does this item contain inappropriate content?
Report
Do you believe that this item violates a copyright?
Report
Does this item contain quality or formatting issues?
Report