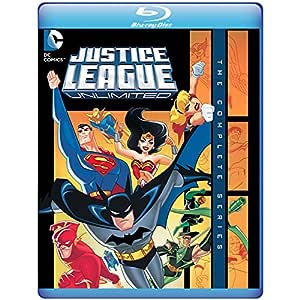 Format: Blu-ray
4.9 out of 5 stars 720 ratings
Available at a lower price from other sellers that may not offer free Prime shipping.

Together, they've saved the world countless times from unimaginable dangers. But the price has been high. Their ranks have diminished after fighting off an alien invasion and with new dangers arising at an ever-increasing pace, the remaining crime fighters realize that protecting the entire world is going to take more technology and more manpower. A lot more. Featuring the original seven Leaguers - Batman, Superman, Wonder Woman, Flash, J'onn J'onzz, Green Lantern and Hawkgirl - now joined by an unlimited selection of allies including Green Arrow, Supergirl and Black Canary. But some think that so many heroes, so much power, is too much power and a conspiracy against them named Cadmus is growing. And after years of foiled plots and repeated beatings, the galaxy's worse villains finally have a plan: strength in numbers! Led by Lex Luthor, the Legion of Doom prepares to dominate the universe. First order of business: destroy the Justice League!

4.9 out of 5 stars
4.9 out of 5
720 global ratings
How are ratings calculated?
To calculate the overall star rating and percentage breakdown by star, we don’t use a simple average. Instead, our system considers things like how recent a review is and if the reviewer bought the item on Amazon. It also analyzes reviews to verify trustworthiness.

Missus O
1.0 out of 5 stars A Glitchy Disc 3
Reviewed in the United States on July 1, 2018
Verified Purchase
I'm a fan of Justice League Animated and Unlimited. This buy would have been a good purchase for a fan. Ths only caveat is Disc 3 is glitching! Discs 1&2's great. But disc 3 is like a pirated good copy of an original. It comes complete with pixelated scenes, pausing scenes without me pausing it, blurred out scenes... Case in point, the video attached. I didn't pause it, it pauses the disc on its own, no voices on some part.
Read more
28 people found this helpful
Helpful
Comment Report abuse

- Excellent follow-up to other DCAU shows, like Batman: The Animated Series, Superman, Justice League, and even Batman Beyond.

- A very "adult" show, meaning that the themes presented aren't always simple. A great deal of depth to the writing, which I have come to expect from Timm and the DCAU staff.

- A decent send-off to the DCAU.

Any fan of comics, other DCAU properties, the original Justice League series, or superheroes in general should own this.
Read more
30 people found this helpful
Helpful
Comment Report abuse

Stephen Hoffman
5.0 out of 5 stars More stars than the American flag!
Reviewed in the United States on August 19, 2018
Verified Purchase
I recently bought my first Blu-ray player, and what better way to inaugurate it that than by getting something in HD that I was going to replace anyway? I love all the DCAU series even more than the original comics (anything is better than those godawful live action movies), and, as far as I'm concerned, this is the definitive version of the Justice League.

Set a few years after the previous season ends, the Justice League (Superman, Batman, Wonder Woman, Green Lantern, the Flash, Martian Manhunter, and later, Hawkgirl) have moved in to a new headquarters and substantially expanded their roster, now including just about every B-andC-list hero in the DCU. (A few of them even get story arcs of their own.) Besides the usual array of supervillians, gods, monsters, and natural disasters to deal with, the League must now face Project Cadmus; an Illuminati-like shadow cabinet of mad scientists, sorcerers, and crooked government agents hellbent on starting a war between superhumans and the government.

I bloody love this series! Some episodes are hilarious, others are tragic or downright scary, others leave unresolved questions that may never be answered and will certainly wrack your brain long after the credits have rolled. I can only give a resounding roar of applause for this series, it's writers, and animators. (Actually, I think animation looks better in HD than live action does!)
Read more
11 people found this helpful
Helpful
Comment Report abuse

Disc 1 has a bit of growing pains as the writers seem to be trying to figure out exactly what to do with all of the superheroes, but within a few episodes the writers start to hit their stride and the show becomes significantly more enjoyable. Disc 3 has a worthwhile "Legion of Doom" arc although not quite as good as Disc 2.

The universe is continued from "Justice League" (without unlimited). A few episodes here and there reference the events from the previous series. But this series is designed with the proper flashbacks to explain the relevant details. There are at least two episodes which directly reference characters and events from "Batman Beyond"
Read more
23 people found this helpful
Helpful
Comment Report abuse

Conor
5.0 out of 5 stars DC's animated lineup did connected comic book franchises like kings 2 decades ago
Reviewed in the United States on October 24, 2016
Verified Purchase
Forget the MCU! DC's animated lineup did connected comic book franchises like kings 2 decades ago! ((Also, don't forget the MCU... those movies have been plenty fun))
This show is just a delight. Cleverly written dialogue with a massive excellent cast and some great stories/story arcs.
It's important to note that though this show stands alone quite well, it's part of a universe that ties to 6+ other shows/movies that shared voice actors as well as writers. When the same creative minds and voices lead the material for 20+ years they can pull off some amazing feats.
For example: the climax of season 2 of JLU (2004) is a Chekov's gun that was actually loaded in an episode of Superman TAS (1997). Whereas the season 2 finale is an epilogue to Batman Beyond (1999) which is itself a continuation of Batman TAS (1992). It's no wonder this show felt so satisfying to watch.
Read more
12 people found this helpful
Helpful
Comment Report abuse
See all reviews

Sjoerd fries from the netherlands
5.0 out of 5 stars New info on super man supergirl batman flash wonderwoman
Reviewed in the United Kingdom on December 24, 2019
Verified Purchase
One for the collection so that the story is complete
Read more
One person found this helpful
Report abuse

darrell mallinder
5.0 out of 5 stars very good indeed
Reviewed in the United Kingdom on November 20, 2018
Verified Purchase
justice league unlimited i got it for my son e realy loves it he's got quite a few super hero dvd's and blue ray's its a very good blue ray to own great item
Read more
Report abuse

Amando Da Costa
5.0 out of 5 stars Happy with it
Reviewed in the United Kingdom on August 13, 2020
Verified Purchase
It came with everything and it worked on my PS4
Read more
Report abuse
See all reviews

Page 1 of 1 Start overPage 1 of 1
This shopping feature will continue to load items when the Enter key is pressed. In order to navigate out of this carousel please use your heading shortcut key to navigate to the next or previous heading.
Back
Next
Pages with related products. See and discover other items: children's animated series