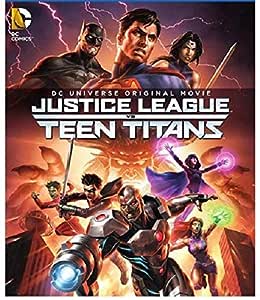 Various (Actor, Director) Rated:
PG-13
Format: Blu-ray
4.6 out of 5 stars 1,616 ratings
See More
Available at a lower price from other sellers that may not offer free Prime shipping.

Soon after Damian joins the Teen Titans as Robin, a rift develops between the Justice League and the Titans over Raven, whom the JL sees as being in league with her father, the demon Trigon, while the Titans see her as his victim. Soon the rift turns into an all-o ut war, as the Titans take it upon themselves to protect Raven from the League, while thwarting Trigon’s plans to create a hell on Earth.

4.6 out of 5 stars
4.6 out of 5
1,616 global ratings
How are ratings calculated?
To calculate the overall star rating and percentage breakdown by star, we don’t use a simple average. Instead, our system considers things like how recent a review is and if the reviewer bought the item on Amazon. It also analyzes reviews to verify trustworthiness.

Underground RebornTop Contributor: Star Wars
4.0 out of 5 stars Teen Titans Are A Go! (Book 5: Pt. 2)
Reviewed in the United States on February 9, 2017
Verified Purchase
As this current chapter in the Bruce Timm lore continues, we now add a long awaited group of heroes into the fray.

After Batman: Bad Blood, Batman sends Robin over to the headquarters of The Teen Titans for the sake of learning teamwork and more importantly, surrounding him with heroes that are his age. The question is will this stubborn fighter learn how to work with a team or will he just stick with the status-quo.

I felt it was time to bring The Teen Titans into this film library and the fact that this pivotal film unites the two New 52 story arcs together was pretty well executed. I thought the story wasn't the strongest this library has given us but, the fun factor is there. As a person who loved Young Justice that atmosphere is brought into this film. The chemistry between the characters was well done, the story is great especially, dealing with the origins of Raven and diving into the magical elements of the DCAU which they have not done much of. Stuart Allen and Sean Maher returning as Robin and Nightwing is such a great touch and Stuart Allen has proven himself to be such a driving force in these films. I my opinion he is the second coming of Kevin Conroy. Every time he voices Robin there is always something new and exciting to see. Even if the film is not the best he always shines.

This film not only creates a brand new story arc in the New 52 timeline but, it keeps the story strong and it shows us that The Teen Titans are relevant. I am hoping with the next story we get more surprises and more action from these young heroes.

Black_Wren
4.0 out of 5 stars Really like how they depicted Teen Titans
Reviewed in the United States on May 20, 2018
Verified Purchase
Being that this was a story that in the original Teen Titans show was multiple episodes, saying that there is a time issue again is obvious. Especially since we are introducing several new characters. Attention to the two main issues, Damian learning how play nice with others (the whole reason he was banished to the Teen Titan in the first place) and Raven's very real issues with her father, Trigon, (the entire plot for the movie). Everyone else was sort of sidelined, though Starfire did a quick run down of everyone's issues for Damian.
And I have no problem with Starfire. She is older, probably in her twenties like Nightwing, and in charge, so having her being motherly was just fine. I don't know what ditsy lines some other reviewers were referring to. She has one or two moments where she reminds the audience that English is not her first language and Earth is not her birthland. Compared to how often that happened in the TV show it nicely reflected how long she has lived on Earth.
I also loved how they did the Teen Titans. They actually had them getting out of their uniforms and hanging out in their civ clothes. It was also funny to see how everyone but Damian could get into uniform with a snap of their fingers while he had to run back to the car to get his stuff. Makes Blue Beetles comment to Damian about him bringing his sword seem a little selfish. Of course he had to bring his gear with him. And Starfire doing the Sailor Moon routine for her uniform change got a snort. I also liked how when they were out of uniform they went by their regular names. I had no idea that Starfire's actual name was Kori.
Read more
One person found this helpful
Helpful
Comment Report abuse

EposVox
4.0 out of 5 stars Made me miss "Teen Titans," but great film for this universe.
Reviewed in the United States on June 5, 2016
Verified Purchase
This is one of my favorite animated films of the newer Damien Wayne series!
The comedy is a little more kid-oriented compared to the other films, it's clear they wanted to grab a bigger audience here, but it was still pretty good.

Raven's voice was the super generic "goth kid" voice, much preferred her "Teen Titans" voice. Starfire's voice was way too "motherly" - which contrasted with them still trying to give her ditsy lines from time to time.

Overall was a pretty good animated film for this universe, and made me miss the old school "Teen Titans" cartoon.
Read more
8 people found this helpful
Helpful
Comment Report abuse

Jessica Rogers
5.0 out of 5 stars If you like the Justice League movies...
Reviewed in the United States on April 12, 2016
Verified Purchase
I don't tend to write a lot of reviews because most products are kind of 'meh.' But I got this movie in the mail today and watched it right away, and I thought it was pretty awesome. I was on the fence about it because some of the DC animated movies haven't been so great lately. But this one was really wonderful. And the title itself and description are actually fairly misleading as to what the actual plot is. Anyway if you enjoyed Justice League War or Throne of Atlantis, you will enjoy this movie. That's basically all you need to know :) Just it's more in step with the tone of the Justice League animated movies rather than Batman Son of Robin and broad in scope. My sole complaint is no Green Lantern. But hey, you can't fit absolutely everybody into these movies. Overall a great watch.
Read more
4 people found this helpful
Helpful
Comment Report abuse

The History Detective
4.0 out of 5 stars Good DC cartoon movie, better than the live action DCEU movies
Reviewed in the United States on April 15, 2016
Verified Purchase
This was a pretty good showing in the latest of the new 52 inspired cartoon movies. Nice to see the Justice League back in action, though a big letdown not having Green Lantern or Aquaman in it. A Martian Manhunter cameo would not hurt either. Nice to see the Teen Titans back as well, and there was a very nice tribute shot at the end of the movie. It had some good action in it, and I always love to see when superhero, sci-fi, and magic themes are present in a DC story. It definitely had some awkward bits, but overall I enjoyed it and would recommend it. In my opinion, even with the Justice League and Teen Titans fighting demons from hell, it was still far more upbeat and enjoyable then the depressing and dark live action Batman vs Superman movie. As a big DC fan, I hope they make more of these cartoon movies more often. Between these, and the great DCTV shows, I can hopefully see my favorite superheroes in action for some time to come.
Read more
One person found this helpful
Helpful
Comment Report abuse
See all reviews

Omar Filali
5.0 out of 5 stars The item is still in perfect condition when I received it
Reviewed in the United Kingdom on January 6, 2020
Verified Purchase
As it was for a present, I've not much to comment on the item. The person who received it was very happy...
Read more
Report abuse

Page 1 of 1 Start overPage 1 of 1
This shopping feature will continue to load items when the Enter key is pressed. In order to navigate out of this carousel please use your heading shortcut key to navigate to the next or previous heading.
Back
Next
Pages with related products. See and discover other items: justice league cartoons, dc animated movies