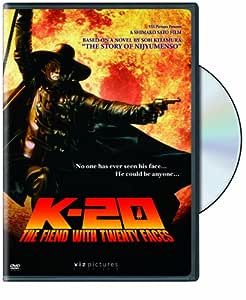 K-20: The Fiend With Twenty Faces

Based on the novel by Soh Kitamura, the character of The Fiend with Twenty Faces is known to all of Japan and is the central figure in this thrilling story. The cast includes some of the most recognized names including Takeshi Kaneshiro, an actor consistently cast in the biggest films across Asia, and Takako Matsu, one of Japan’s most sophisticated and respected actresses. The acclaimed writer-director Shimako Sato and the incredible “retro futuristic” visuals make this film an action spectacular not to be missed. It is 1949 in Japan, in a world where World War II never happened and the nobility system established in the Meiji Era is still in place. An extreme divide exists between the upper and lower classes, with 90 percent of the country’s wealth being held by the upper class. The capital of Teito is in crisis with the emergence of a phantom thief known as "The Fiend (Kaijin) with Twenty Faces" or simply "K-20." Heikichi Endo (Takeshi Kaneshiro) is a circus acrobat who is deceived by K-20 and is set up to take the fall for the phantom thief. Using his incredible physical dexterity, Heikichi wages war against K-20 in order to clear his name, fighting alongside K-20's next wealthy target, Duchess Yoko Hashiba (Takako Matsu), and her fiancée, brilliant detective Kogoro Akechi (Toru Nakamura). But what is the ultimate decision Heikichi has to make?

Michael Hawkins
4.0 out of 5 stars Fun re-imagining of a classic Japanese creation
Reviewed in the United States on November 3, 2014
Verified Purchase
Being a big fan of turn of the century detective novels, I've grown quite fond of Japanese author Edogawa Rampo's stalwart Holmes-inspired hero Kogoro Akechi. Sadly, coming across stories for this character have been few and far between.

So naturally, I was quite intrigued when I learned of this movie, which isn't exactly based on any one Rampo story, but more of a big tribute to both the era, characters themselves and pulp novels in general. With a hint of 'alternate history' to go along with it.

The title comes from Akechi's longest-running adversary, the Fiend With Twenty Faces (or K-20 as he's called at times for shortening's sake) another homage by the prolific writer to Gentleman Thief, Arsene Lupin. A daring thief who can take on seemingly endless roles and identities in his pursuit of pilfered riches.

The movie though takes place in an alternate Japan of 1948-49, in a timeline where World War II never happened. Japan's rigid 'turn-of-the-century' class structure is heavily enforced. Things would be as they 'should', if it wasn't for the cavalier and cunning 'K-20', the brilliant thief who thumbs his nose at authorities and brilliant detective Kogoro Akechi.

But all of this is of no consequence to poor circus acrobat, Endo Heikichi, whose just trying to entertain people with his impressive feats of daring-do and eke out a meager existence. That is, till one day he's contacted by a mysterious old man claiming to be a journalist wanting pictures of the upcoming (and highly publicized) marriage of Kogoro Akechi to rich heiress Yoko. Things aren't as they seem for the hapless Heikichi and he ends up being framed as the notorious thief. After being chewed up a bit by a thoroughly corrupt judicial system, Heikichi manages to escape with the intention of clearing his name.

Many twists and turns in this fun and epic yarn make for a memorable story. The actors do a stellar job with their roles (especially Nakamura Toru as Kogoro Akechi), and the effects are pretty top-notch. It's like a pulp era Batman-esque movie... set in Japan.

I highly recommend this movie.

Joan Vinge
5.0 out of 5 stars Great movie! Please add an English dub, says subtitle fan....
Reviewed in the United States on July 10, 2012
Verified Purchase
I recently discovered this movie while browsing around on Amazon, got a copy, and loved it. The other reviewers here have covered all the high points: This is a great retro-futuristic, even steampunk flavored adventure, with immensely appealing actors, including Kaneshi Takeshiro, "the Asian Johnny Depp", as he's been called. (He never ages! How does he do it?)

There is one thing I would like to add to the feedback--and this is speaking as a fan of subtitles over dubs in 99 cases out of 100: It makes me frustrated that there is no version of this film available with a dubbed English soundtrack. Not having an English-dubbed track doesn't really bother me, but it does bother many viewers whose comments I have seen. It is easier to follow the action that way; although for me a film that's poorly dubbed ruins the emotional impact. Nevertheless many people do have problems with subtitles for one reason or another.

This movie is so much fun it deserves to be seen by a wider audience, but viewers' dislike of subtitles seems to be so widespread that I'm afraid many people will pass over "K-20" for that reason. Viz Pictures, which brought it out in the U.S., has published translated Japanese graphic novels (manga) and put out animated (anime) series and movies for years. Now they have begun bringing home some live action movies, like this one. I was surprised, frankly, that they didn't add an English dub to this movie, as they do with their anime.

Viz has yet to put out a BD of this movie. I very much hope they will (it would be great in high definition), but I also hope that when they do, they'll have realized they're missing out--and so are many viewers--because of that surprising stumbling block.

In any case, viewers who normally hate subtitles but love well-acted, well-written superhero or adventure movies, should at least rent this one: "Read a movie", for a change--at least this movie. It's full of action, suspense, and even comedy scenes that don't need explanation to enjoy in any language.
Read more
One person found this helpful
Helpful
Report abuse

D. Di ruscio
5.0 out of 5 stars k20 the fiend with twenty faces
Reviewed in the United States on December 27, 2012
Verified Purchase
takeshi kanashiro at his best.i have never seen him in a comedy role but he was great.the movie is part mystery a circus illusionist that is duped into being k20.so now he must prove that he is innocent and with help of the circus people they set out to do it.what follows is him saving a woman from k 20 .this movie is what japan would be like if there was no war with the us..ihave watched this movie a few times and still enjoy it. i think you will also enjoy it.
Read more
One person found this helpful
Helpful
Report abuse
See all reviews