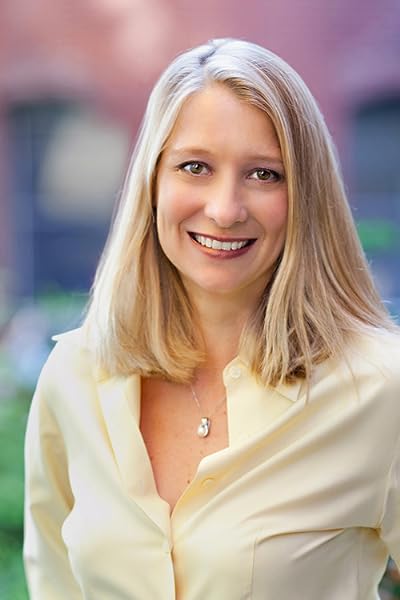 "Did you like Gone Girl? Are you into suspense thrillers? Here's a great one for you." --Parents

Mari Passananti is the author of The Hazards of Hunting While Heartbroken. A graduate of the University of Rhode Island and the Georgetown University Law Center, she lives in Boston, where she divides her time between writing and keeping up with her toddler. She is currently at work on her third novel. For more information, please visit www.maripassanantibooks.com

Start reading The K Street Affair on your Kindle in under a minute.

Brianna
5.0 out of 5 stars Mari Passananti does it again!!
Reviewed in the United States on February 4, 2013
Verified Purchase
I was really excited to learn that Mari Passananti was coming out with another novel after reading The Hazards of Hunting while Heartbrokenl She does not disappoint!

This political thriller kept me in suspense from the first page. Part John Grisham's The Firm, and part Showtime's Homeland, this novel kept me turning the pages. Her characters always seem to have the right mix of believability and grit, and Lena Mancuso, the protagonist who finds herself in a global conspiracy with the FBI and Russian Federal Security Service, is no exception.

It's got twists and turns, and unexpected romance to boot.

DBussey
4.0 out of 5 stars Lots of scenic details
Reviewed in the United States on May 2, 2013
Verified Purchase
This is a thriller with some unusual twists...some a bit unbelievable but still makes for a good read. The young associate, Lena finds herself a convenient spy for the FBI who need to obtain records from her law firm. It takes place in DC and in Moscow with lots of good details about the locations. Good action and character development.
Read more
One person found this helpful
Helpful
Comment Report abuse

Wendy Walker
5.0 out of 5 stars Great Escape!
Reviewed in the United States on January 24, 2013
Verified Purchase
The K Street Affair has everything you could want in a book! It's fun. It's smart. It's engaging. And it's witty. From the first few pages, you will be rooting for Lena, laughing out loud, and holding on to your beach chair (if your lucky) as you follow her through this cleverly plotted adventure. Mari Passanante has a remarkable skill. She pulls you into a serious plot, all the while amusing you with clever one-liners and rich insights into what motivates people across the globe. Loved it!
Read more
One person found this helpful
Helpful
Comment Report abuse

Melelani5
5.0 out of 5 stars Highly Recommended!
Reviewed in the United States on January 17, 2013
Verified Purchase
The K Street Affair is clever, well-written and engaging. The book has an intricate plot, compelling characters, and suspenseful (yet believable) situations. In addition, how refreshing it was to read an adventure story with a female hero!

Dawn Ohanian Tringas
5.0 out of 5 stars A Fast Paced Read
Reviewed in the United States on January 17, 2013
Verified Purchase
I really liked this book. I picked it up originally because I read Passananti's other book. This is a political thriller featuring a female character, and not the kind of story I am usually drawn to, but I have to say, it was very entertaining! It's fast paced and a bit suspenseful, but also has interesting, shifty characters who kept me on my toes. The ending was especially fun, so do not read the last page first, as some readers are inclined to do.
Read more
Helpful
Comment Report abuse

JSSF
5.0 out of 5 stars Smart & fun thriller - couldn't put it down
Reviewed in the United States on May 8, 2013
Verified Purchase
I had the best time reading the K Street Affair. It was smart, sexy, exciting, and the perfect escape. Very well-written, intelligent and interesting but never to the detriment of fun. I'm not one of those people who can't put books down -- I can put most anything down. This one I could not - highly recommend.
Read more
One person found this helpful
Helpful
Comment Report abuse

Doc from Boston
5.0 out of 5 stars A terrific read
Reviewed in the United States on November 24, 2013
Verified Purchase
One of the most exciting books I've read in a long time! Extremely well written and held my interest from beginning to end. I highly recommend this book to others. I can't wait to read another book by this author!
Read more
Helpful
Comment Report abuse

Joey Madia
4.0 out of 5 stars A political thriller with a twist!
Reviewed in the United States on January 8, 2013
Mari Passananti's The K Street Affair is a well-paced and everything-but-the-kitchen-sink action-adventure featuring a first-person perspective from lawyer-turned-amateur-agent Lena Mancuso. Use of the first person is unusual in the spy/terrorism genre, and it took a little while for me to adjust to it, but it does not deter from the overall success of the novel and in the end, provides some benefits to the way the tale unfolds.
The story begins with a terrorist bombing in Washington, DC and quickly escalates and broadens to involve a high-powered law firm, a multi-national corporation, several front organizations, and high-level politicians in Saudi Arabia, Russia, and the United States, all vying for economic and global power. Add in the FBI and a sudden murder of someone very close to Lena and we are taken along on a fast-paced ride through the geo-political world of offshore accounts, high-tech spying, assassination-machinations, and U.S. diplomatic over-reliance on a "the enemy of my enemy is my friend" mentality.
Passananti's reluctant heroine does her best to stay centered and sane as the tension and intrigue mount. As she struggles to cope with tragedy and danger, she comments on the condition of her hair, the make of her borrowed boots, and the quality of food and drink. To the author's credit, this somehow adds to, rather than detracts from, the realism of the novel.
In general, Passananti does an able job of crafting a suitably exaggerated but still plausible series of events, and she explains highly complex entities like offshore banks and front corporations with the light touch that comes from a thorough understanding of the research she undertook.
The K Street Affair is packed with surprising turns, plenty of tension, and some pointed (and for this reader, enjoyable) digs on real entities and people, with names of corporations and descriptions of some politicians just thinly veiled enough to keep the reader guessing as to whom she based them on.
Another aspect of the novel that I enjoyed was Passananti's choice to not turn Lena into a martial-arts spymaster as she progressed through the story. Lena's natural instincts and abilities, while challenged and sharpened, were not absurdly enhanced during the course of her experiences.
There is plenty of action--and some subtly scribed sex as well--that keeps things interesting, strategically breaking up the denser legal and high-finance sections.
Prior to 9/11 I was an avid reader of these types of novels--especially Tom Clancy's--but on September 12, 2001, I took several shelves' worth of them to the dumpster in back of my apartment. In the blink of an eye, the world these authors had described as fantasy suddenly became all too real.
Passananti's novel--like many of the spy-genre films I've seen since that time--has just enough tongue-in-cheek sensibility to keep it fun amidst the larger and very real evil at work in the world.
As I read The K Street Affair I couldn't help but feel like this was the first of a possible series of Lena Mancuso adventures, and I was not proven wrong, although the set-up for the next one was not what I thought it would be.
I look forward to a sequel.
Read more
10 people found this helpful
Helpful
Comment Report abuse
See all reviews