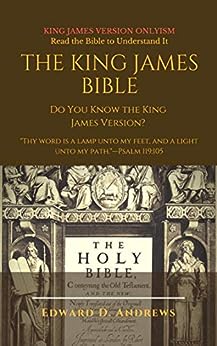 THE KING JAMES BIBLE: Do You Know the King James Version? Kindle Edition

EDWARD D. ANDREWS (AS in Criminal Justice, BS in Religion, MA in Biblical Studies, and MDiv in Theology) is CEO and President of Christian Publishing House. He has authored eighty-two books, including THE TEXT OF THE NEW TESTAMENT, THE COMPLETE GUIDE TO BIBLE TRANSLATION and REASONABLE FAITH. Andrews is the Chief Translator of the Updated American Standard Version (UASV).

3.9 out of 5 stars
3.9 out of 5
4 global ratings
How are ratings calculated?
To calculate the overall star rating and percentage breakdown by star, we don’t use a simple average. Instead, our system considers things like how recent a review is and if the reviewer bought the item on Amazon. It also analyzes reviews to verify trustworthiness.
Top reviews

Jim Kilson
4.0 out of 5 stars A Welcome Addition to KJV Scholarship
Reviewed in the United States on September 4, 2018
"But beyond this, my son, be warned: the writing of many books is endless, and excessive devotion to books is wearying to the body." [Ecclesiastes 12:12 NASB]

Occasionally I find myself drawn to this passage, especially when I get caught up with a book that would be considered by most as a "history book." In the past I've openly admitted that I'm a bibliophile, a "lover of books," and that admission still stands. I've also admitted that I'm more academically minded than practical ministry minded, in that I love books of an academic nature, ones that delve into the nuance of a given subject.

I was drawn to this book specifically because it’s a subject that interests me greatly, owing to the fact that I’ve written on extensively on the subject. Edward Andrews Book “THE KING JAMES BIBLE: Do You Know the King James Version?” is a fine addition to the existing corpus of KJV scholarship. The book isn’t groundbreaking as to it’s content; it does however present the reader with something absent in most works on the subject, a balance between historical information and textual insight.

One of the most admirable aspects of this work is how it handles the contentious nature of the Textus Receptus (TR) Geek text, which the KJV is based upon. Andrews neither vilifies it nor does he venerate it, freely acknowledging it’s strengths, as well as its weaknesses, something we all wish KJV Only advocates would do!

Andrews reinforces the fact that the King James Version, more than any other work, influenced the English language that we now speak. Thought we now live in a world where new translations (varying in influence and accuracy) seemingly appear overnight, the King James Version is here to stay and will undoubtedly retain its position as most used English Bible translation of all time.

There are a few formatting issues and some minor grammar mistakes to contend with. As to the texts forming, concern arises in regard to Andrews’s inclusion of articles by outside authors. While these articles serve as a fine complement to the text, it’s often difficult to determine where the guest author’s article ends and Andrews’s text begins. Though distracting these issues aren’t so major as to detracts from the texts focus and content.

Though not as refined in its text and flow as works on the subject by McGrath, Bobrick, and Nicholson, this work is, nonetheless, worth the reader’s time and consideration.

Disclosure of Material Connection: I received this book free from the author. I was not required to write a positive review. The opinions and views expressed here are my own. I am disclosing this in accordance with the Federal Trade Commission's 16 CFR, Part 255: "Guides Concerning the Use of Endorsements and Testimonials in Advertising."

hermeneutic
1.0 out of 5 stars Warning
Reviewed in the United States on August 12, 2018
This book is against the KJV, the author uses Bruce M. Metzger (a Bible denier) as a back-up in showing that the KJB is useless. The author, Andrews, as a proponent of CT is doing nothing but throwing seeds of doubts against the word of God, the Bible/KJB; he writes: "Do You Know the King James Version?" the same as "Yea, hath God said?", Gen.3:1.
The author will try to show that Christians do not need a useless and outdated Bible like the KJB, what they need today is another bible from a different text and an updated version...
In the FB page of his Christian Way of Life/CWL BIBLICAL VIEWS, E.Andrews states: 05 The Modern Critical Text
The Member affirms, fully agrees and accepts that the critical text of Westcott and Hort of 1881, the Nestle-Aland and the United Bible Society (WH NU) is the preferred and trusted text in Bible translation.
06 The Textus Receptus
The Member fully rejects the Textus Receptus (TR), i.e., the Received Text as corrupt and untrustworthy.

Now, based on the above statements, anyone can perceive what the author's intention is in his book "The King James Bible."

Amazon Customer
5.0 out of 5 stars Looks like a great resource!
Reviewed in the United States on August 12, 2018
KJV only advocates have caused so much division within the church and will answer to God some day.
Read more
3 people found this helpful
Helpful
Report abuse
See all reviews
Back to top
Get to Know Us
Make Money with Us
Amazon Payment Products
Let Us Help You
EnglishChoose a language for shopping. United StatesChoose a country/region for shopping.
© 1996-2021, Amazon.com, Inc. or its affiliates