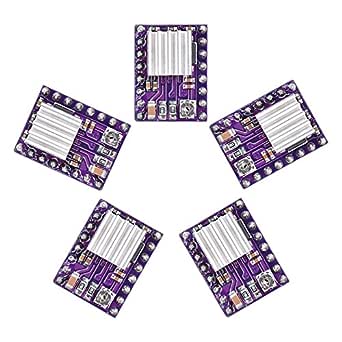 NOTE:
If you find any problem, please contact us at first, and our technical staff will help you to solve the problem at once. Thanks!

4.4 out of 5 stars
4.4 out of 5
92 global ratings
How are ratings calculated?
To calculate the overall star rating and percentage breakdown by star, we don’t use a simple average. Instead, our system considers things like how recent a review is and if the reviewer bought the item on Amazon. It also analyzes reviews to verify trustworthiness.

Jimmy the FoxTop Contributor: Arduino
3.0 out of 5 stars Affordable, decent replacement for Pololu drivers
Reviewed in the United States on November 27, 2018
Verified Purchase
I bought these to put into a RAMPS board that I use for experiments and whenever I need to move something around. Overall, I find them about as good as the original Pololu, which is a design I don't consider to be all that great, but if you want to run commonly-found NEMA 17 steppers like the ones in 3D printers, these will work.

They are not less noisy than the drivers that came with my RAMPS board. I still hear plenty of hissing, grinding, and clicking sounds with most motors. I don't know if the problem exists at higher voltages but my RAMPS board is limited at 12V (I didn't do the power supply mod). I attempted to run some of them at 24V in a breadboard, but they weren't any quieter that way either. I have larger power supplies for CNC machines I might try, but in my experience, a noisy stepper driver is always noisy.

I also saw stalls and missed steps with all but a few of my motors, and for this reason I stopped using these drivers and put the old Pololus back in. Maybe it's a setup issue, but the "cheaper" ones I was using worked better no matter what I did. I actually found it difficult to force my old drivers to stall, unless I deliberately turned the current too low. I would rate these drivers four stars if I could find one or two motors that reliably work with them.. but out of hundreds in my collection, I could find none. I can prevent stalls by limiting max and min speed and acceleration, but after doing so the system was no faster than with the original drivers, which I was able to "overclock" modestly. I don't think making my printer faster would help anyway, because it's already limited in speed by print quality and heater capacity.

I have a personal suspicion that there's a "sweet spot" in motor inductance for these kinds of "cheap choppers." Lots of common surplus steppers made for low-voltage use have high inductance, which makes these drivers slow to react and limits torque. Above a certain limit, the current never reaches the setpoint. Higher-torque motors can have too low an inductance, too, which also causes problems because the chopper oscillator runs at maximum speed and the driver can't accurately measure torque/current. If you spend a lot of money on a driver, you get a more versatile oscillator and more sensitive current-measuring, and that's where I think these things fall short.

That said, however, my issues were mainly with the plethora of motors I've scrapped from lab equipment and old printers, and I didn't do extensive testing with current-era 3D-printer-size steppers (tho I did use a 3D printer mechanic for some of it). I need larger modular drivers for what I'm doing. You may find that these work great in your application, and at the price, you can probably afford to try them out.

Joshua K.
5.0 out of 5 stars These are DRV8825 not to be confused with A4988
Reviewed in the United States on September 27, 2019
Verified Purchase
I bought a Bigtreetech SKR V1.3 and shortly after I bought these realizing I needed stepper drivers. I was only getting about half this distance for moves after configuring and installing Marlin on the SKR. Turns out when I configured Marlin I had just quickly referenced this page at a glance saw the familiar A4988 in the title, which is the default stepper setup in Marlin. After looking at the page more carefully I changed the stepper drivers to what it should be in the firmware (DRV8825) and this fixed my problem. Hopefully this review can save someone time.
Read more
4 people found this helpful
Helpful
Comment Report abuse

Arrived early February and installed in a RAMPS board, set to 0.82MV and all good. Well, all good for about 16 hours of printing anyway. Just pulled them all out and have gone back to the A4988 after the second one failed. It is a pity as they quietened the printing down a lot with the 1/32 Micro-stepping.

I am a bit surprised as I am a fan of Kingprint with with several main boards that have proven to be exceptionally reliable, but this latest batch of drivers -- not so much it seems. This is the second batch of DRV8825 I have had from them. The first lot bought in mid 2018 have been excellent and still running reliably.

Will order from a different supplier and try again.

AllTold
1.0 out of 5 stars Useless as stanalone stepper driver.
Reviewed in the United States on May 13, 2020
Verified Purchase
I bought these for lab use to test/analyze motion controller behaviors only to discover that these little drivers need much support circuitry before they'll function. These drivers will also drive from their own noise, meaning once stepping has started it might never stop!
These might be okay drivers for those who know them well, but if you're a first time user of these like me I say AVOID!

nick
4.0 out of 5 stars Careful with the voltage
Reviewed in the United States on January 15, 2019
Verified Purchase
Pretty solid. It's a straight pololu rip-off, so I kind of feel bad cheaping out on it, but the budget was tight for a school project. I killed a couple (as well as an arduino) trying to drive a stepper over 24 volts, so be careful, and keep it several inches from the microcontroller on your board. If they're packed together, the pins can arc to the arduino and fry both.
Read more
3 people found this helpful
Helpful
Comment Report abuse

James Golden
4.0 out of 5 stars get better heatsinks but a good replacement for a4988 style
Reviewed in the United States on August 12, 2018
Verified Purchase
I installed these in an Anycubic Kossel liner plus delta printer and it has made a big difference in the amount of heat that is generated. I have theses set for about .7 amps and they runs silent and cool, the steppers no longer make the whine and are cool to the touch after a 2 hour print. I replaced the heatsinks with something that was a bit larger and added a fan to the enclosure. No problems with any of them so far.
Read more
One person found this helpful
Helpful
Comment Report abuse

royc10
5.0 out of 5 stars Made my 3D printer much quieter.
Reviewed in the United States on September 9, 2020
Verified Purchase
These little boards are a great replacement for the standard 16 microstep driver and provide a 32 step option. If used to increase microsteps and quiet the stepper motors, Marlin software or printer settings must be changed for double the step rate or measurements will be off by 2X.
Read more
Helpful
Comment Report abuse

KC8IQW
5.0 out of 5 stars Excellent stepper driver.
Reviewed in the United States on March 8, 2019
Verified Purchase
Excellent product. Was shocked to find out it supports 1/32 stepping. As always, very your voltage before attaching your steppers. Mine were all around 0.6V except one that was at 2+V which could have fried my motor.
Read more
One person found this helpful
Helpful
Comment Report abuse
See all reviews

Page 1 of 1 Start overPage 1 of 1
This shopping feature will continue to load items when the Enter key is pressed. In order to navigate out of this carousel please use your heading shortcut key to navigate to the next or previous heading.
Back
Next
Pages with related products. See and discover other items: Best Rated in 3D Printer Interface & Driver Modules, regulator heat sink, printed circuit boards, forced air systems, micro 3d printer