Kai Ellory Viola is a pen name of D Kai Wilson-Viola, and is the main pen name for the 'All my Friends are Reapers' series.
When not writing about deities fighting over the fate of the planet, Kai can be found looking after her son, daughter, partner, cats, taking photos, playing games and studying. She's well on her way to the path she wants to take to her doctorate and loves to write.

She lives in the sunny Cotswolds, and no matter what she does, she can't hide her biohazard tattoo, which she finds hilarious even after 15 years.
Read more 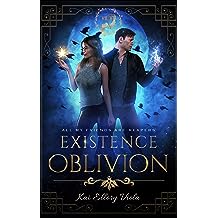 Can one soul prevent Oblivion?  Maybe with a little help from her friends
Maebh had discovered early on that of all the things she had to deal with, sometimes using her middle name was easier than explaining why "Maebh" was a trick name. So she was Mae to her close friends, Hellenna professionally (Siobhan, again...arguments).
So, when she died, she thought there would be a feather, her heart, points would be awarded for not dicking people around with her name, and maybe time for an "Oh bugger," if she was eaten.
Instead, she awoke in a place that could not be, surrounded by nine people, weapons drawn. And they were all squabbling over who could claim her soul! Each chased off the other, until a voice thundered "She's MINE!"
And that's when things got a bit complicated. Each of the nine Reapers' gods appeared. Eight of which she had venerated in one way or another. And one she had to be introduced to. The ninth, sputtering at the indignity, demanded, that to make the Game fair, she is partnered with another like her.
So...the Game was proposed. Souls as rare and open as hers were hard to find. Each reaper's next 20 claims would be weighed, measured and held. The pantheon with the most got the prize...Except, the reapers could go anywhere in time to find them, so there was no time limit. Probably a good thing.
Mae's job? To ensure they were taking people at their time, not before and that they were not interfering with the people they collected beforehand. Not easy when she had 10 people to watch, including her opposite.
Oh, and if the God she didn't believe in won, her existence - the Universe - will be completely obliterated. Heaven hath no fury like a diety unacknowledged...
No pressure... 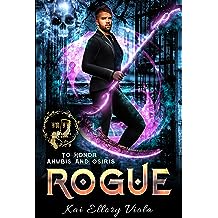 Rogue: To honor Anubis and Osiris (All my friends are Reapers Book 1) Sep 29, 2020
by Kai Ellory Viola
$2.99
Maehb and Jax are sorting out a mess - while the competition is ongoing, some of the other gods are taking advantage of setting some petty squabbles and nastiness. The problem is, they're both stepping into arguments that have nothing to do with the errands they're on. And while the world is already on the brink, and everything is going in directions that make no sense, it's hard to know what choices are the right ones. And, it turns out, Mae isn't as far from her own time, or her own home as she thought, which makes it all the harder when part of what is going on involves several of her old sect. But she's got a dashing companion - Jax is one of the younger Reapers - one she has a nagging feeling she might actually know. And he's kind, bright and clever, so it's not as hard as it could be, right?Depends what you define as hard - learning magic, using it safely and stopping Jax from claiming people he finds interesting versus those that would actually work better for his dieties gives her a whole new idea of why she wasn't expecting this - at all. And why she's pretty sure that if she's not doing the things that she should, that there's more at stake than the end of the world, though, that's quite a big issue in all itself. With all this going on though, and Jax's behaviour becomes more erratic, she realises that being an Arbiter is just as much about saving the Reapers, as saving the world.The Second book of All my Freinds are Reapers centres around Anubis and Osiris, and Jax, a reaper with a past that he's running from, and a life he traded for a long time ago, and one he's not willing to trade back.
Read more