You've subscribed to Agents of Kalanon! We will preorder your items within 24 hours of when they become available. When new books are released, we'll charge your default payment method for the lowest price available during the pre-order period.
Update your device or payment method, cancel individual pre-orders or your subscription at
Your Memberships & Subscriptions
There was an error. We were unable to process your subscription due to an error. Please refresh and try again. 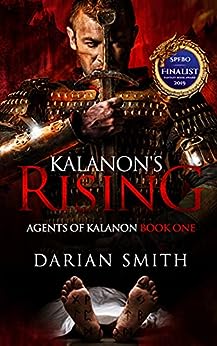 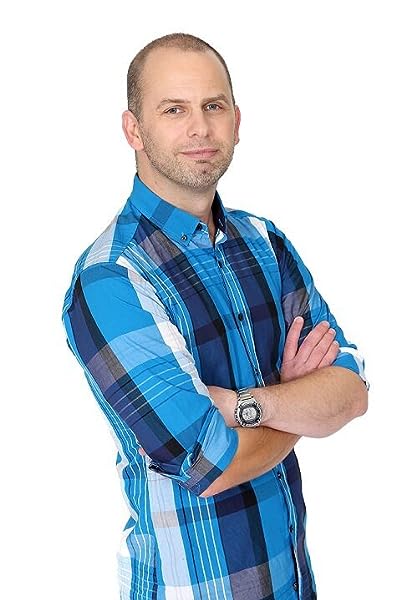 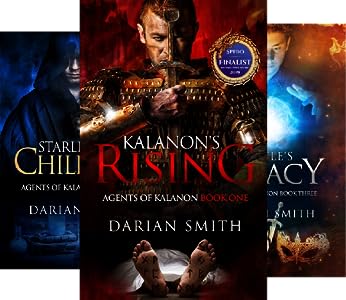 SPFBO Finalist
(mark---lawrence.blogspot.com/2019/10/finalists-for-5th-spfbo.html)
Winner of SpecFicNZ Novel Manuscript Competition
"A wonderfully engaging fantasy whodunnit with high stakes and fun magic" - Fantasy Book Review
"Darian Smith is a very talented writer, one whom I would rank on par with BrandonSanderson and Peter V. Brett. His plots are engrossing,his settingshighly developed and he has a real knack for immersing you fully intothe world.  Kalanon's Rising is both a murder mystery and apowerful fantasy novel, and Smith displays a considerable amount oftalent and imagination at penning both." - Booksellers NZ  (booksellersnz.wordpress.com/tag/kalanons-rising/)

4.2 out of 5 stars
4.2 out of 5
60 global ratings
How are ratings calculated?
To calculate the overall star rating and percentage breakdown by star, we don’t use a simple average. Instead, our system considers things like how recent a review is and if the reviewer bought the item on Amazon. It also analyzes reviews to verify trustworthiness.
Top reviews

Calvin Park
VINE VOICE
4.0 out of 5 stars Wonderful!
Reviewed in the United States on September 19, 2019
Verified Purchase
Kalanon’s Rising by Darian Smith is a fantasy novel with one of the more unique premises I’ve read in recent years. Smith crafts what is essentially a murder mystery procedural with very high stakes and puts it in a fantasy setting which makes magic an integral element of the plot. I loved it!

Smith does a wonderful job of setting the tone early. We’re introduced to Sir Brannon Kesh as a former war hero but now reluctant warrior. His loyalty to the kingdom of Kalanon is unquestioned and while he serves as King’s Champion he is torn between that role and his role as a doctor. While Brannon is certainly the main character in this story, nearly all the other members of his team are also interesting with backstories and motivations that make you root for them. It’s the characters that work so well to make the concept really shine. We have a warrior turned physician who is tasked to solve a torture/murder and the stakes are quite possibly the start of another war. The whodunit aspects are well implemented and, as I said, the strength of the various characters help to elevate this into something beyond a simple, cozy murder mystery. There are also gruesome descriptions of murder scenes which one wouldn’t normally find in a cozy mystery, it’s more Bones than Murder, She Wrote. Not only is the concept interesting and the characters engaging, but the plot plays out well, keeping you guessing and there are interesting bits of magic worked throughout the story. I love when the magic of a fantasy world is important to the plot, and that’s certainly the case here in Kalanon’s Rising. Smith doesn’t just stop with all of this, though. He begins painting a realistic world—one in which prejudices between former enemies plays a role that feels true-to-life. All of these elements work together in just the right proportions to give us a fun, interesting, and authentic feel to a story that is really one-of-a-kind because of its concept.

While I thoroughly enjoyed the entire novel, there were a couple things that didn’t quite work for me. In the early chapters there was a tendency to tell rather than show, especially when it came to world building or some of the backstory for Brannon and Kalanon. This might have been the most expedient way to get the reader up to speed on necessary backstory, and sometimes you just have to bite the bullet and do it, but I prefer when it feels more natural. In the second half of the book Smith finessed things a little by having characters see the perpetrator, but not think of the perpetrator’s name. A character might think, “So, it was HIM!” But they don’t actually think of the name. This frustrated me a bit. I felt it didn’t add much at that point, other than suspense that was more frustration than actual suspense.

Kalanon’s Rising is a wonderfully engaging fantasy whodunit with high stakes and fun magic. One of the more unique books I’ve read recently, I’m looking forward to the sequel—though this one stands well enough on its own.

5 – I loved this, couldn’t put it down, move it to the top of your TBR pile
4 – I really enjoyed this, add it to the TBR pile
3 – It was ok, depending on your preferences it may be worth your time
2 – I didn’t like this book, it has significant flaws and I can’t recommend it
1 – I loathe this book with a most loathsome loathing
Read more
3 people found this helpful
Helpful
Report abuse

Assaph Mehr
4.0 out of 5 stars CSI meets Epic Fantasy
Reviewed in the United States on May 26, 2020
Verified Purchase
Kalanon's Rising was one of the finalists of SPFBO 2019, and the premise of magical murders mystery caught my eye.

The murder of the king's nephew (and presumptive heir) is guaranteed to draw attention. The King's Champion, a current physician and previous war leader, is tasked with finding the murderer and resolving what promises to be a highly political crime.

Together with a few unlikely helpers, Sir Brannon must navigate a world where mages draw on spirits from other worlds and animate the dead, where everyone has secrets and a single mistake would see the spark of a war that would tear his country apart.

Smith gives us a fast moving plot and an interesting magic system. I enjoyed Brannon working to solve the murder, with the occasional detour to other points of view. I enjoyed learning about the world and its interesting mechanics.

One of the most immediate things I noticed was the language. To me, it felt too modern for a non-contemporary setting. That also applies to some of the concepts that the characters bandy about, which seem anachronistic. Still, this would likely appeal to any fans of the CSI shows.

Felix found the mystery part a bit predictable, without any major twists. He also had some questions about the interactions and choices of a few of the characters: he'll fully stand behind the intrigue and scheming, but found those on a personal level of some of the side characters stretching his credulity.

It's an interesting work, with a lot of promise. Though I feel it could have been much more, that could be down to personal tastes. I'd recommend it if you like epic-ish fantasy adventures and crime shows.
--
Assaph Mehr, author of  Murder In Absentia: Togas, Daggers, and Magic  - for lovers of Ancient Rome, Murder Mysteries, and Urban Fantasy.
Read more
One person found this helpful
Helpful
Report abuse
See all reviews

Martin Owton
3.0 out of 5 stars A lot to like in this one
Reviewed in the United Kingdom on July 1, 2020
Verified Purchase
There's a lot to like in this book; rather than the usual epic fantasy fare of heroes struggling against some existential threat to the empire/kingdom/world Kalanon's Rising presented as murder mystery in a fantasy setting. There are some interesting world-building quirks - they have gas lighting though without the other indutrial infrastructure that supports it, but this isn't actually used in the story. It is multi-POV, though there were a few annoying points where I felt the author did not disclose everything the POV character knew - this sir is cheating the reader. My main difficultly was that I felt I never got close to Brannon, the main POV character. He seemed to remain a vehicle for the plot rather than a real person. Perhaps he neded more back story. There was however a good twist at the end that I did not spot.
Read more
Report abuse

Amazon Customer
4.0 out of 5 stars A super fun murder mystery in a fantasy setting!
Reviewed in Australia on January 17, 2020
Verified Purchase
My second last SPFBO read by @dariansmith. Whoo I loved the little team of murder investigators in this book! If you love a good murder and political mystery wrapped up in a fantasy setting, you'll like this book! My favourite was the priest who was also an expert on poisons, but all the characters were really well drawn, including our MC, Brannon, who is the strong, slightly broody but really good-hearted type. A recommended read from me!
Read more
Report abuse

I enjoyed the:
- murder mystery which did keep me guessing.
- various types of magic shown.
- strong female characters and particularly related to one who was the mother of a young child.
- main character who was a warrior turned physician.
Read more
Report abuse

Kindle Customer
5.0 out of 5 stars Something different
Reviewed in Australia on June 28, 2021
Verified Purchase
It was a pleasure to read while some of the twists and turns were easy to see they fitted well.

I have now brought the whole series and am working through the next book.
Read more
Report abuse
See all reviews