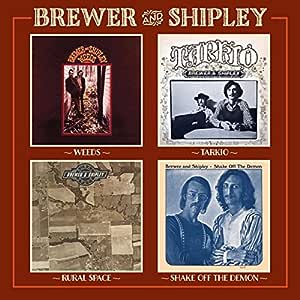 Two CD collection. Brewer & Shipley were an American folk rock duo who enjoyed their peak success in the late 60's and early 70's with these four albums recorded for Karma Sutra. They were known for their intricate guitar work, vocal harmonies, and there socially conscious lyrics. Weeds, originally released in 1969, featured guests Jerry Garcia, Mike Bloomfield and Nicky Hopkins. Tarkio, originally released in 1970, produced a Top Ten hit with the track "One Toke Over The Line". Shake Off The Demon, originally released in 1971, had as guests David La Flamme (It's A Beautiful Day), Spencer Dryden (Jefferson Airplane) and John Cippolina (Quicksilver Messenger Service). Rural Space originally released in 1971 featured Billy Mundi (Mothers Of Invention) and on pedal steel Buddy Cage (New Riders Of The Purple Sage).

4.9 out of 5 stars
4.9 out of 5
53 customer ratings
How does Amazon calculate star ratings?
Amazon calculates a product’s star ratings based on a machine learned model instead of a raw data average. The model takes into account factors including the age of a rating, whether the ratings are from verified purchasers, and factors that establish reviewer trustworthiness.
Top reviews

Music fan in the Midwest
5.0 out of 5 stars Great to have them back in my collection
Reviewed in the United States on January 30, 2017
Verified Purchase
I agree with other reviewers here. This 2-disc set sounds very good – better than previous attempts to capture the duo’s late ’60s/early ’70s vinyl albums in the Digital Age.

If you are thinking about giving these guys a try beyond their best-known song – “One Toke Over The Line” – this set covers their core four albums for Kama Sutra upon which their reputation was largely built. Mike Brewer and Tom Shipley possessed strong voices (dig their tight harmonies), played superb acoustic guitar, and wrote both lilting ballads and strong, socially conscious songs. There was an undercurrent of spirituality and humanism in their work as well. And when Mike and Tom weren’t writing and performing their own estimable material, they covered well-known songs by other talented writers (notably Bob Dylan’s “All Along The Watchtower”; Jackson Browne’s “Rock Me On The Water”; and Jesse Winchester’s “Yankee Lady”) and always did an outstanding job.

A lot of credit must go to the musicians who guested on the duo’s albums to give them a distinctive sound. Good heavens! Mike Bloomfield and John Cipollina on electric guitars, Red Rhodes, Jerry Garcia, and Buddy Cage on pedal steel guitar, John Kahn on bass guitar, Santana’s Jose Areas on congas and bongos, Nicky Hopkins and Mark Naftalin on keyboards, and many, many other talented pros are on hand for this song or that album. Acoustic folk music may have been at the heart of Brewer and Shipley’s recording sessions, but the production values and arrangements clearly pushed the duo’s songs into the same warm, welcoming terrain traveled by the Grateful Dead on “Uncle John’s Band” and “Ripple”; Jonathan Edwards on “Sunshine,” and “Everybody Knows Her”; Cowboy on “Song Of Love And Peace” and “Please Be With Me”; Matthews Southern Comfort on “And When She Smiles” and “Road To Ronderlin”; and Neil Young on “Tell Me Why” and “Cripple Creek Ferry.” But, as with those artists and those songs, Brewer and Shipley were unique. I was fortunate to see them perform in a small venue more than 40 years ago, and even without a backing band they were terrific.

This UK reissue label -- Retroworld -- did a fine remastering job on these four Kama Sutra albums from Mike Brewer and Tom Shipley. Perhaps one day the label will piggyback the duo’s two mid-’70s albums on Capitol – ST-11261 and Welcome To Riddle Bridge – on a single disc.

Mark Fountain
5.0 out of 5 stars they sound like – well
Reviewed in the United States on January 28, 2017
Verified Purchase
Brewer & Shipley; they sound like – well, Brewer & Shipley. Acoustic guitars and tight harmonies. Yes, there is the known “hit” “One Toke Over the Line,” but there is So much more to be found there. They would be a natural double bill with any number of 60’s/70’s folk-rock acts: Buffalo Springfield, Grateful Dead, Doobie Bros., Jonathan Edwards, et al. Session musicians include the likes of Mile Bloomfield, Jerry Garcia, John Cippollina, and David LaFlamme. I bought this collection just to replace my copy of “Shake off the Demon,” the other 3 recordings are mostly new ground. This first purchase of the new year is a great mix of nostalgia and new discovery.
Read more
8 people found this helpful
Helpful
Comment Report abuse

L. Jaffe
5.0 out of 5 stars Brewer & Shipley's Golden Era!!!
Reviewed in the United States on February 21, 2018
Verified Purchase
Michael Brewer and Tom Shipley, who, after 50 years together making music, experienced their greatest years of success while with the Kama Sutra label between 1969 and 1972. Together for the first time, and more than likely, the last time, are the four albums they recorded originally on vinyl in a two-disc cd set. Sound quality is great, and all songs are presented in the same order as the original release. I would have LOVED to have seen some outtakes from the recording sessions included, like Blind Lemon Jefferson's "One Kind Favor", and Bob Dylan's "The Mighty Quinn" (released on an earlier reissue of "Tarkio") and "You Ain't Going Nowhere". Still, it's a terrific reissue, and that leaves only the two Capitol albums they subsequently recorded after these, and Michael's first solo album produced by the late Dan Fogelberg as still being out of print. Perhaps for us fans, that oversight will soon be corrected.
Read more
4 people found this helpful
Helpful
Comment Report abuse

Captain K
5.0 out of 5 stars Essential Folk-Rock Collection - Lovely, and Often Fun
Reviewed in the United States on September 28, 2019
Verified Purchase
The fifth star may have been awarded because I have admired this folk-rock duo since their earliest days, but anyone knowing nothing about Brewer & Shipley is missing some fine Woodstock-era tunes. The package collects all four of their albums for the Kama Sutra label (their first was for A&M records), which represents their heyday both musically and commercially. The fourth and fifth albums lack the consistency and zest of the second and third, but are certainly worth having - and, to my knowledge, were never released in the CD format until now. Brewer & Shipley are most famous for their comedic "One Toke Over the Line" (if you want to experience true hilarity, look up the clip from when it was performed on the Lawrence Welk show!). There is nothing wrong with the gentle good humor evidenced by this and several other tracks, but it does not constitute much of the duo's oeuvre (particularly the achingly lovely "Weeds" album). The partners were fine harmony singers and, particularly in the beginning, accompanied by luminaries such as Mike Bloomfield, Jerry Garcia, and Nick Gravenites. Their rendition of Jim Pepper's "Wichi-Tai-To" (from "Weeds") should have been minted in 24-karat gold.
Read more
Helpful
Comment Report abuse
See all reviews from the United States

GroovyJohn
5.0 out of 5 stars All for 1
Reviewed in the United Kingdom on March 24, 2018
Verified Purchase
Great in depth release
Read more
Helpful
Sending feedback...
Thank you for your feedback.
Sorry, we failed to record your vote. Please try again
Report abuse