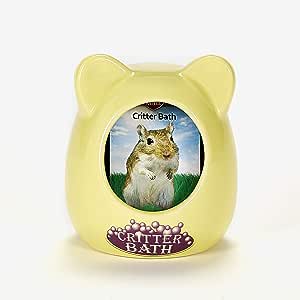 Visit the Kaytee Store
4.6 out of 5 stars 1,220 ratings
Amazon's Choice recommends highly rated and well-priced products.
Amazon's Choice for "gerbil bath house"
Available at a lower price from other sellers that may not offer free Prime shipping.
New (9) from $6.97 & FREE Shipping on orders over $25.00

insturctions included with sample of dust

Carefully packaged and shipped within one business day of order receipt. Tracking included.

4.6 out of 5 stars
4.6 out of 5
1,220 global ratings
How are ratings calculated?
To calculate the overall star rating and percentage breakdown by star, we don’t use a simple average. Instead, our system considers things like how recent a review is and if the reviewer bought the item on Amazon. It also analyzes reviews to verify trustworthiness.

E.
5.0 out of 5 stars For reasons unknown, my hamsters love these things
Reviewed in the United States on November 15, 2017
Verified Purchase
I have purchased two of these critter baths now, and am leaving this review because both baths have been absolute hits with my hamsters. I used it at first as a sand bath with my robo, but he prefers to sleep in it. Any time I disturb him, this is the first place he sleeps before he remakes his burrows. I ordered another critter bath for my new Campbell's dwarf hamster, and it was an immediate hit. I placed it within her cage without any sand, and she immediately began to nest in it, which she has not yet done in her other hides.

The I am not sure why they love these so much, but they do. Even if they do not use them for their intended purpose, I highly recommend these little cups.

Crystal
5.0 out of 5 stars Wonderful bath house but box could use some extra protection while shipping
Reviewed in the United States on February 2, 2017
Verified Purchase
I wanted a nice heavy weighted bath house for my robo hamster, Nugget. This was a lot better than I was expecting most of the photos or reviews show the item being fairly small but my judgement is it's quite large especially if you have a dwarf hamster like myself. Colours are sent randomly but I received the one I actually hoped for so that was an added bonus. It's quite deep as well so it can hold a fair amount of sand. It's cute and I think its well worth the price,the package it was sent in was just a really small cardboard box it has no bubble wrap around or inside it so if the package isn't handled with care while transporting I'm sure it would crack. I bought bulk items so my order came in a large box of 4 other items and bubble wrap which may have helped protect it some what. All in all a lovely product :)
Read more

Nes
5.0 out of 5 stars Perfect for summer time to cool down your hamster
Reviewed in the United States on April 23, 2019
Verified Purchase
It’s so cute, I received the yellow color, keeps my hamster nice and cool, it’s perfect for any Syrian below 200g, any bigger they may have a tight fit. These are NOT the chinchilla sized versions.

My Syrian pictured is about 160g in weight.

Meghan
5.0 out of 5 stars Love it!!!
Reviewed in the United States on January 5, 2016
Verified Purchase
I think this is a great product to buy whether you actually use is as a sand bath house or just another hide-away for your hamster. My hamster loves this to either store his food in or just eat his food in, (or both lol) depending on the set up. I also think this is just so cute! My only complaint is that you can't choose the color you want, luckily I got the bluish purplish one.
Read more

Hamotron
4.0 out of 5 stars Hamster loves it, but I'm not sure...
Reviewed in the United States on July 14, 2013
Verified Purchase
When I first tried to get my hamster to climb into this to see if it was big enough, he went right in, and after a few seconds of being unsure, (his head and front paws were in, the rest of him wasn't), went in completely and refused to come out again for another five or ten minutes. He's a fully grown Syrian hamster, and it was a bit of a tight fit, but he was able to go in and turn around. I've left it in his cage for now, with a little bit of bedding in it, and I might keep it anyway if he decides that it makes a good litter box, or he continues to enjoy just sitting in it.
He seems to like it, but I have my doubts about whether there's enough room for him to take a sand bath properly- once I get the sand I'll edit this and let you know. I'll also try to post a picture of him in it so that people can see how big it is.

Note: The product is well made; sturdy ceramic construction, and no sharp edges as one review complained of. I love the product itself, but I'm unsure of the sizing.
I got the blue color, which was what I wanted, so no complaints there.
Also, the piece of paper inside of it says that it's for "Dwarf hamsters, Gerbils, and other small critters", while on Amazon, it's advertised as as for "Gerbils, hamsters, and small Chinchillas", which is very misleading when buying for a Syrian hamster.

Edit: I just gave my hamster his first sand bath in this. He didn't really seem to have room to bathe properly.
Read more
15 people found this helpful
Helpful
Comment Report abuse

Kay Rich
5.0 out of 5 stars Hamela Anderson loves it!
Reviewed in the United States on February 7, 2017
Verified Purchase
My Syrian hamster loves it! She doesn't take up the whole bath, as it appears in this photo. She often makes a nest with all of the bedding and sleeps in there.
Read more

Kiabels
5.0 out of 5 stars Great ceramic product!
Reviewed in the United States on September 17, 2015
Verified Purchase
This is one of the best ceramic products you can find for your hamster right now. I tried looking for some pretty/cute and pet-safe ceramic products to decorate my hamsters cage but they were no longer available anywhere. I initially bought this product to give my hamsters a sand bath but neither of them enjoy the sand bath so I took the sand out and put bedding in there. It turns out my hamsters really like sleeping in there! They block the opening with a bunch of bedding and hide their little behind inside. This product can be used in many ways, it's a nice decoration, and I highly recommend it!
Read more
9 people found this helpful
Helpful
Comment Report abuse
See all reviews

eadha13
1.0 out of 5 stars Suitable for Hamsters not chinchillas ....
Reviewed in the United Kingdom on November 18, 2017
Verified Purchase
This was advertised as a chinchilla dust bath .... Good job I have a hamster who fits in it. Lovely little item but NOT for a chinchilla ....
Read more
7 people found this helpful
Report abuse

Tracey H.
5.0 out of 5 stars Cute little critter bath.
Reviewed in the United Kingdom on September 23, 2017
Verified Purchase
Fits well in a cage for a small hamster. Hamsters fit easily inside it too.
Read more

Hols969
3.0 out of 5 stars Too small for Degus
Reviewed in the United Kingdom on May 26, 2017
Verified Purchase
This is very small - as it said small chinchillas I thought it would be big enough for the degu but it is too small.
Read more
4 people found this helpful
Report abuse

Chatterbox
2.0 out of 5 stars Not for Syrian hamsters too small.
Reviewed in the United Kingdom on May 12, 2018
Verified Purchase
This hamster bath is said to be for a hamster too however much too small. It did arrive well before it had said to however. If you need it for dwarf hamster possibly will fit but no bigger my Syrian couldn't fit.
Read more
One person found this helpful
Report abuse

sally
5.0 out of 5 stars Great for a sand bath for my hamster
Reviewed in the United Kingdom on October 19, 2019
Verified Purchase
Robo hamster love this
Read more
Report abuse
See all reviews

Page 1 of 1 Start overPage 1 of 1
This shopping feature will continue to load items when the Enter key is pressed. In order to navigate out of this carousel please use your heading shortcut key to navigate to the next or previous heading.
Back
Next
Pages with related products. See and discover other items: chinchilla pet, gerbil accessories, hamster cages and habitats, hamster sand, sand bath, Best hamster accessories for cages