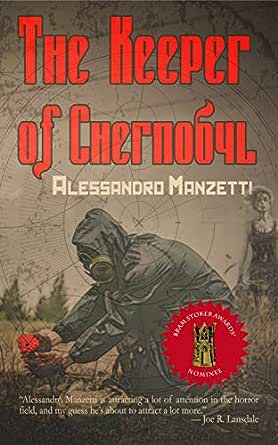 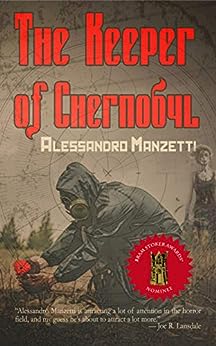 The Keeper of Chernobyl Kindle Edition

Sarah
3.0 out of 5 stars Frankenstein was the monster.
Reviewed in the United States on March 15, 2020
Verified Purchase
the premesis is so dumb it's good: during the cold war Russia looks to make a superhuman who will survive the nuclear holocaust that is sure to happen. this story is the first hand account of one of the scientists who is working on this project. and it is absolutely the worst format in which to do it. it reads a lot like Frankenstein, and purposefully as well, the author makes a number of references to the work, uses similar language. the problem is it's hard to really inject horror and terror about plutonium infused super beings going mad and killing everyone when you're doing it through journal entries. also a problem? gross infatuation with the female test subject (whose great depths and passions is only exhibited through her painting she does with her vaginal fluid) that he lusts after while repeatedly comparing to his dead daughter. unsurprisingly she is also a former sex worker. the prose is flowing stream of conscious and our MC slips in and out of madness as the story progresses adding a nice touch of unreliable narrator.
Read more
Helpful
Comment Report abuse
See all reviews from the United States

Steve Stred
5.0 out of 5 stars A truly bleak tale
Reviewed in Canada on May 7, 2020
Verified Purchase
God, what a truly bleak story.

Alessandro Manzetti is a highly accomplished author, both in fiction and in poetry, and runs an esteemed publishing press. Yet, somehow, through all of that, the general horror community at large seems to have missed this one. I say that because, at the time of writing this review, this release has four Goodread ratings and one review.

The first thing that drew me into this book was the gorgeous cover. I know gorgeous isn’t maybe the phrase you’d most commonly associate with this picture of a man caressing a flower while wearing a mask and radiation suit, while in the background an emaciated, pale, woman wearing no protective gear looks on, but it is.

The second was the synopsis.

Set in the 60’s and 70’s, as Russia went full blown, top-secret mission crazy, a scientist tells his story of working in a bunker deep under ground.

A) Everything about Chernobyl has always fascinated me. I’m not sure why, honestly, as the entire event and fall out is and was horrific. Maybe it’s because of the stark photos I saw growing up of the abandoned amusement park?

B) The secret bunker, secret experiment angle will always get me, every single time.

What I liked: While I typically don’t enjoy the journal style/epistolary style of books, this one worked perfectly. Told through the pages of the main scientist’s secret journal he kept, we get the details of ‘Project Prometheus.’ A group of intelligent individuals are gathered in the Kremlin to facilitate a program to ‘create’ new beings.

Manzetti does a great job of creating a claustrophobic feeling throughout this book, but as things go off the tracks and the government begins to eliminate scientists one by one as their projects fail, the level of tension raises much like a Geiger counter would in the exclusion zone.

The book’s third act, after they move to Chernobyl’s site, is really a thing of beauty. We start to see the main scientist’s love for his subjects grow, even as things get worse and everything hits the fan.

What I didn’t like: While the journal style did work, I think I would have loved this book even more if it had been a straight forward story. I wanted more details, more information on the events that happened.

Why you should buy this: Just a stunning, stunning book. Think ‘Frankenstein’ meets ‘Splice’ meets the horror movie ‘Chernobyl Diaries.’ Manzetti truly created a masterful story of suspense, tension and while the ‘Prometheus Project’ on its own would keep me riveted, the added unseen force of the Russian government always willing to rear up its ugly head was a bonus.

I do want to add that there is a note at the start that this was translated from Italian, which is Manzetti’s native language. I found no issues what-so-ever with the phrasing or writing, so if that is one of the reasons holding you back – don’t let it be.

This one’s going to stay with me for some time and I really, really hope more people begin to find it.
Read more
Helpful
Sending feedback...
Thank you for your feedback.
Sorry, we failed to record your vote. Please try again
Report abuse