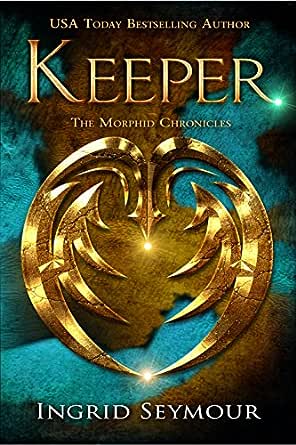 You've subscribed to The Morphid Chronicles! We will preorder your items within 24 hours of when they become available. When new books are released, we'll charge your default payment method for the lowest price available during the pre-order period.
Update your device or payment method, cancel individual pre-orders or your subscription at
Your Memberships & Subscriptions
There was an error. We were unable to process your subscription due to an error. Please refresh and try again. 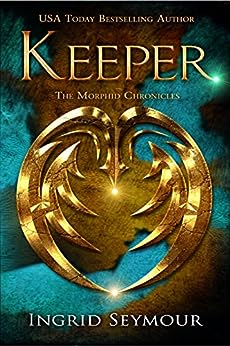 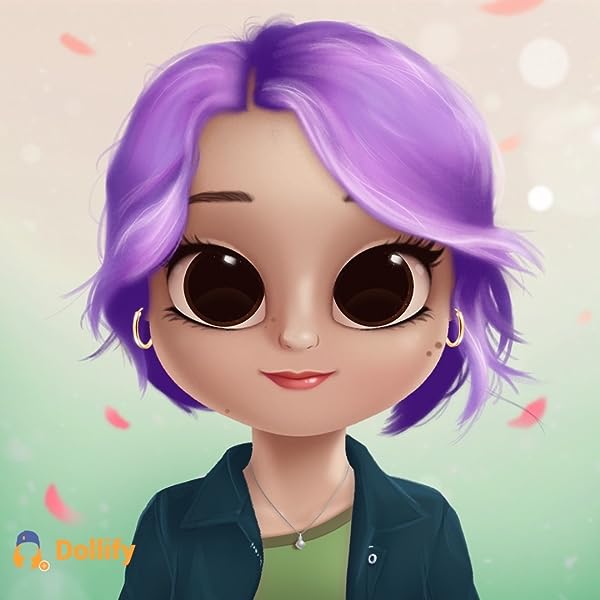 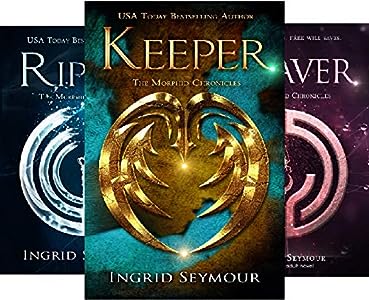 What readers are saying:
★★★★★ Keeper gets an A+ for creativity
★★★★★ Mind-blowing creative
--This text refers to the paperback edition.

Ingrid Seymour is the author of Ignite The Shadows (Harper Voyager, August 2015). When she's not writing books, she spends her time working as a software engineer, cooking exotic recipes, hanging out with her family and working out. She writes young adult and new adult fiction in a variety of genres, including Sci-Fi, urban fantasy, romance, paranormal and horror. Her favorite outings involve a trip to the library or bookstore where she immediately gravitates toward the YA section. She's an avid reader and fangirl of many amazing books. She is a dreamer and a fighter who believes perseverance and hard work can make dreams come true. She lives in Birmingham, AL with her husband, two kids and a cat named Mimi. --This text refers to the paperback edition.

4.5 out of 5 stars
4.5 out of 5
178 global ratings
How are ratings calculated?
To calculate the overall star rating and percentage breakdown by star, we don’t use a simple average. Instead, our system considers things like how recent a review is and if the reviewer bought the item on Amazon. It also analyzes reviews to verify trustworthiness.
Top reviews

Brittany Williams
4.0 out of 5 stars Fantastic read!
Reviewed in the United States on May 23, 2016
Verified Purchase
*This review is cross posted on Good Reads and my personal blog - Ginger Night Owl.*

My first thought when I started this book was that I wouldn’t like it. I admit that I judge books by their covers, quite frequently, and this was just so pretty! However, there was just something about the cover that screamed “you’re not going to like it, Brittany.” I decided to give it a try – plus, at the time Amazon had it for free and I figured what could it really hurt?

I was instantly hooked within the first chapter! In a way, I was getting a lot of Scott Westerfield’s Uglies vlbe while reading this – with the whole “free will” thing. For the most part, however, this is one of the most unique stories I have read in a really long time.

From the very beginning, since the moment that the character was introduced, I knew that I would not like Ashby. I don’t know what it was about him during that scene with Sam that made me say “nope, I don’t like you.” I just didn’t like him. I thought maybe he’d grow on me . . . nope. At least further into the story, I had legit reason to despise him. He didn’t deserve it, of course, but his character just got under my skin.

Each of the characters had depth. There were characters that seemed unimportant to the plot, but they weren’t “invisible” characters – most had a purpose in one way or another, even if we (as a reader) aren’t 100% certain what that purpose is yet.

Both Greg and Sam are coming of age – quite differently than “humans,” of course – yet are going through the process together. At first I thought that Sam would be some type of damsel in distress and would need Greg to protect her and be her Prince Charming, in a way. Then I really thought about it – she’s a heroine, in a sense, and Greg plays just an important role as a hero.

I’ve heard a lot of people talk about how there are no male heroes in YA novels these days. How it’s always a female heroine, and that’s what’s preventing boys from reading. I think Keeper is a perfect story for young men to read that has a male hero and doesn’t focus entirely on the female character. It’s slightly tainted by love, but the idea is still there. We’ve all got to fight for something.

Dreamer J
4.0 out of 5 stars Clever and well-written YA fantasy!
Reviewed in the United States on June 29, 2016
Verified Purchase
Ingrid Seymour’s ‘The Morphid Chronicles’ falls somewhere between ‘The Mortal Instruments’ and ‘Harry Potter.’ She has skillfully created a whole new species that co-exist with humans. Morphids are supernatural beings hidden amongst humans on Earth. Their population has always been small, and for generations, a Regent has overseen Morphids, in order to protect their secrets and ensure their existence.

All Morphids were predetermined, by Fate, into their caste. Some are Companions, who have a soul-mate, an Integral, with whom they bond, marry, and have children. Other Morphids are born into being Sorcerers, Seekers, Warriors, Caretakers, etc. Fate is the guiding force that determines a Morphid’s role in life, and once they ‘morph’ into that role around 16 years of age, their mind and body is never the same.

With ‘Keeper,’ Seymour gives us something to think about; free will vs predetermination. Morphids rely heavily on their inner instinct; a caste-determined instinct. At times it seems there is a secondary voice in their minds, insisting that something is right or wrong. As a Keeper, Greg feels a connection to his charge, Samantha, but he is not her Integral. Instead, another young man by the name of Ashby, is Sam’s Integral. Despite his Keeper status, Greg retains more of his own mind than most Morphids, and retains his own feelings towards her.

‘Keeper’ is also a nice coming-of-age story revolving around the three teenagers. We see Greg, Samantha (Sam), and Ashby with their parents, in three very different home situations. We see the teens interact with their friends, and go through a tiny bit of normal high school drama.

‘Keeper’ is a clever and well-written YA fantasy. Highly recommended for fans of YA, coming of age, and fantasy books.

Thanks to author Ingrid Seymour for providing a copy of this book in exchange for an honest review.

Peejay
VINE VOICE
3.0 out of 5 stars Interesting story
Reviewed in the United States on September 7, 2020
Verified Purchase
Greg was a gang!y boy, shy and withdrawn. He isn't human. His parents are integrels. They are made for each other. When Greg morphs, they hope he will be one too. Then he can find his other half and live full of love. But he is different. When the time comes, he becomes something else. Greg is a keeper.

Ashby knows who his integrel is and he has his friend transport him to her so he can meet her. He is the reagents son, but rest assured there is no love lost between them. Sam is the girl between the two of them. Samantha, Greg and Ashby. The connection is unheard of. Something big is happening and time will tell us what we don't know.

It's a strange but interesting story. I will continue reading.

Auburn
VINE VOICE
3.0 out of 5 stars Uhm what?
Reviewed in the United States on August 22, 2018
Verified Purchase
I had this book sitting on my kindle for awhile and finay decided to read it. I enjoy fated romance but this...this was not that. Instead it brought two people who weren't going to end up together together and made you like them. Then forced her to fall for someone else.
While the story was new and interesting there really wasn't a lot of plot progression. Just the doomed romance and such. It could be just a set up for the other two books? I am unsure but I don't know if I will read those.

If you enjoy romances where you pick the wrong guy then this is for you.
Read more
3 people found this helpful
Helpful
Comment Report abuse

Sherrie
5.0 out of 5 stars This is a clean romantic story and I really liked it.
Reviewed in the United States on January 18, 2017
Verified Purchase
I was given this book for an honest voluntary review. I loved it. The writing was great and it transported to each of the scenes where I was lost in the story. The story-line was original and well thought out and I wasn’t able to outguess the story-line. I enjoyed the two main characters Greg and Sam (Samantha). They were able to grow and develop through the story and it showed their weaknesses yet didn’t dwell on them. The characters were able to use their strengths and overcome the trials placed before them. Showing that with help sometimes two are stronger than one and that choices matter in our lives. I am looking forward to reading book two. This is a clean romantic story and I really liked it.
Read more
One person found this helpful
Helpful
Comment Report abuse
See all reviews

Samantha, Greg & Ashby are 16-17 yr olds. Two live in USA & one in the UK. All 3 are Morphid's, a Race that live amongst us. At around 17 yrs old they produce a type gelatinous substance that encases them for about 2 weeks, when they emerge they have morphed into the best fully grown versions of themselves. They are all gorgeous. Sam has no idea that she's not Human though 😳

This is a coming of age drama. It deals with bigotry centred around the differing Castes within the storyline but this can easily be related to today's issues about Co!our, Religion & Sexism!! It also made me wonder if the Author was thinking about arranged marriages whilst discussing the Companions!? I found all of this side of the book really fascinating to think about.👍
An entertaining & thought provoking read!😇

Lucrezia M.
5.0 out of 5 stars Love At first read
Reviewed in Italy on March 10, 2017
Verified Purchase
It s been a Long time since I ve had a chance to enjoy and simply love everything, from The plot to The pacing and The characters.The metaphor of actually coming of age is Key to The Story and perfectly rendered thanks to genuine and fresh ideas that make The Whole Story captivating. The struggle for free will and love complete this creative and mind-blowing must-Read.
Read more
Report abuse
See all reviews