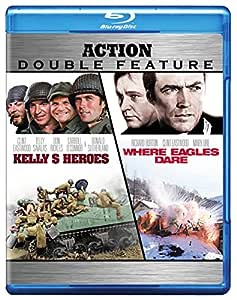 They were goldbricks until they found out about the gold bricks – a fortune in Nazi-confiscated bullion! Clint Eastwood reups with the director of his Where Eagles Dare for the action-filled and tongue-in-cheek tale of GIs who decide to get something extra out of the war. Eastwood’s title character masterminds a scheme to slip behind enemy lines and steal the loot. Co-stars include a trio on the verge of big-time TV success: Carroll O’Connor, Telly Savalas and Gavin MacLeod. Plus, Don Rickles plays the expectedly outspoken Crapgame. And in the same year as his starmaking M*A*S*H, Donald Sutherland is Oddball, World War II’s only hippie. Dig it!

The mission is clear. Get in. Get the general. Get out. Commandos charged with freeing a U.S. general from an Alpine fortress should also be told to trust nothing – including the search-and-rescue orders just issued. Richard Burton and Clint Eastwood go Where Eagles Dare in this twisty World War II thriller written by action master Alistair MacLean (The Guns of Navarone, Ice Station Zebra) and directed by Brian G. Hutton (Kelly’s Heroes). Known for fiery dramatic roles, Burton ventures into the realm of movie pyrotechnics with dynamic efficiency. And Eastwood’s cool-fire presence heightens one searing action sequence after another. The film became Eastwood’s then-largest hit and its studio’s #1 moneymaker of the year.

Kelly's Heroes, a tongue-in-cheek 1970 variation on The Dirty Dozen looks less fresh than it did in the year of its release, but it still has some enjoyable moments. Clint Eastwood stars along with Donald Sutherland, Harry Dean Stanton, Telly Savalas, Don Rickles, Carroll O'Connor, and Gavin MacLeod in the story of American soldiers who try to steal gold behind enemy lines in World War II. Sutherland's hippie G.I. doesn't have the sardonic and timely appeal he did during the Vietnam War, but the film's irreverence and several of the performances are worth a visit. --Tom Keogh

Scorned by reviewers when it came out, Where Eagles Dare is a concentrated dose of commando death-dealing to legions of Nazi machine-gun fodder that has acquired a cult over the years. In 1968 Clint Eastwood was just getting used to the notion that he might be a world-class movie star; Richard Burton, whose image had been shaped equally by classical theater training and his headline-making romance with Elizabeth Taylor, was eager to try on the action ethos Eastwood was already nudging toward caricature. Alistair MacLean's novel The Guns of Navarone had inspired the film that started the '60s vogue for World War II military capers, so he was prevailed on to write the screenplay (his first). The central location, an impregnable Alpine stronghold locked in ice and snow, is surpassing cool, but the plot and action are ultra-mechanical, and the switcheroo gamesmanship of just who is the undercover double (triple?) agent on the mission becomes aggressively silly. --Richard T. Jameson