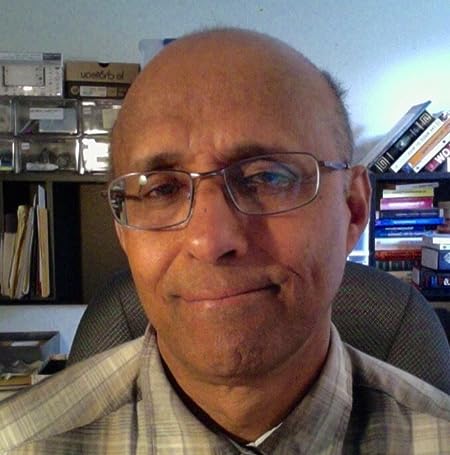 Ken Puddicombe's first calling was in the Accounting profession. He's a professional [CPA,CMA] Accountant] who provided controllership for a number of companies in the private sector before he retired to pursue his first love of writing. His hobbies includes travelling and he is slowly covering all five continents, having already travelled to South East Asia, South America, and Europe.

He considers himself a people watcher watcher and loves to observe all aspects of the human psyche. His writing has appeared in newspapers and literary journals. Originally from British Guiana [now Guyana] in South America, he immigrated to Canada and still lives there with his family.

Racing With The Rain (2012) was his first novel and is set in British Guiana, Cuba, Canada and Guyana. His new novel Junta is now out and is set in the island of Saint Anglia in the Caribbean where events conspire to thwart its many characters. A collection of short stories entitled Down Independence Boulevard was out in 2017. His genre is fiction, based on international locations but especially focussed in Canada, Caribbean and Guyana. 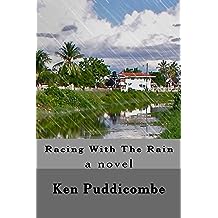 Racing With The Rain Oct 30, 2012
by Ken Puddicombe
( 10 )
$2.29
Racing With The Rain: A fast moving rain cloud in an otherwise clear sky triggers a sudden downpour and people run for cover. Is it possible to outrun the rain? Can one ever really escape the past?
Guyanese born and Canadian naturalized Carl Dias will find out as he returns for his father’s funeral.
His visit will bring him in conflict with a government that is facing threats from an expat group intent on overthrowing the dictatorship. It will also evoke the events of the Kennedy Administration/ British Government manipulation of the internal politics of the former colony, an era where the CIA promoted an attempted coup, causing riots and the virtual destruction of the commercial district of Georgetown, the Capital. It was also a period where the Dias family imploded due to divided loyalties, resulting in scars that never healed.

“Characters caught between deeply conflicting loyalties are driven by the politics of the dank, tropical atmosphere of a British Caribbean colony, half a century ago, only to find themselves trapped in a drama whose tragic effects still haunt them and their fellow Guyanese.” –Frank Birbalsingh author of Novels and The Nation: Essays in Canadian Literature.
"Kenneth Puddicombe's RACING WITH THE RAIN is a gritty look at the politics of a nation and within a family that drive a young man from his home and from his country. Gripping and hard-hitting, this is a novel you won't want to miss." -KAREN FENECH author of Gone
Read more
Other Formats: Paperback 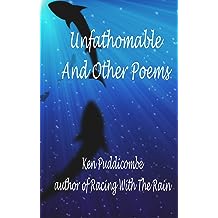 Unfathomable: And Other Poems May 17, 2020
by Ken Puddicombe
( 2 )
$0.99
UNFATHOMABLE, Ken Puddicombe’s first collection of poems, follows three prior works: Racing With The Rain, a historic fictional novel, Junta, a novel set in the Caribbean, and Down Independence Boulevard And Other Stories, a collection of short stories. The poems in Unfathomable cover a variety of themes, all connected by the author’s recollection of a childhood growing up in the 50’s in British Guiana, his early adulthood there, the rise of nationalism and the pre and post independence eras, and returning to Guyana in several visits over subsequent years.Nostalgia and yearing for a time long gone and never returning, are explored in poems like Going Back, Middle Road, Country Life, and Echoes In My Mind, in which the author evokes memories of the suburb of La Penitence.The rise of nationalism, the period of disturbances in the 60’s and resulting dislocation are reflected in poems like The Refugee, The Ants Nest and Colonial Mentality.Heritage: I Am What I Am. The Indentured. Matav. The Crosby Paper. Somaria and Train Mai all delve into the complications and implications of a mixed heritage from which one can never escape and which define many of us. ATTACHED:
Read more
Other Formats: Paperback 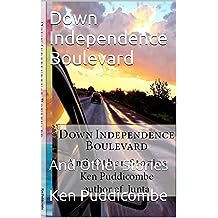 Down Independence Boulevard: And Other Stories Feb 16, 2017
by Ken Puddicombe
( 4 )
$1.95
A Collection Of Short Stories
Read more
Other Formats: Paperback 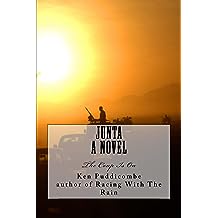 Junta: a novel set in the Caribbean May 18, 2014
by Ken Puddicombe
( 4 )
$3.35
Can an individual make a difference when powerful forces are aligned against democracy? Can someone avoid the stigma of his heritage?
It is 1979. After an absence of over three decades, professor MARCUS JACOBSON has returned to Saint Anglia in the West Indies to take up a position at the university, where he hopes to use his vast experience and training to bring the institution into First World standards.
Marcus comes from a long line of sugar barons. His father and grandfather owned the last estate on the island. His great-grandfather supplied labour to the estates in the lucrative slave trade between the West Indies and Africa and was responsible for several cruel acts. Marcus has suffered due to his discreditable lineage and is now hoping to bury the skeletons in his closet.
GENERAL MARKS, head of the armed forces stages a coup within weeks of Marcus’ arrival. The General is power hungry and sees himself as head of a re-federated West Indies. His Aide, CAPTAIN STEVENSON, key to the coup, is promoted to Colonel for services rendered. Marks, however, is only vaguely aware of Stevenson’s devious nature, which includes the recruitment of THE REVEREND, previously of Jonestown, Guyana infamy.
Mark’s coup is successful and he moves swiftly to consolidate his power. However, opposition mounts unexpectedly from different factions. CLARENCE BAPTISTE, an expat, owner of the Gleaner newspaper, once fiercely critical of the deposed corrupt government, is now determined to oppose the Junta and maintain the independence of his newspaper. Melanie, president of the student union, is one of the most vocal critics; she leads the students in a protest march. Opposition also comes from FATHER BERT, someone who believes Liberation Theology concepts should be implemented to reform the church and solve the economic disparity so prevalent in many Caribbean islands. He has ho hesitation in joining the opposition.
Melanie gains the support of Father Bert and her fellow students for a protest march. They make their way to Columbus Circle in downtown Port George, intent on submitting a petition to the military, demanding a return to civilian rule. Troops order the marchers to disperse. The Reverend’s crew is in the background, stoking the fires of conflict. A riot ensues, people are trampled and many injured, a few are killed. Melanie barely escapes the confrontation. Father Bert shepherds students to the sanctuary of his church even though he knows he will face problems with the church leadership and the Junta.
Marcus is reluctant, at first, to join the opposition to the Junta. He feels his heritage and long absence from the island do not give him the right to intervene. When he sees the brutality of the Junta in Columbus Circle, however, he joins the alliance in an attempt to force a return to democracy.
But General Marks is furious his plan for a bloodless coup has been derailed. He worries that his and Stevenson’s dirty-tricks campaign will come to light and he will be held accountable for the Columbus Circle debacle. He and Stevenson agree for The Reverend and his group to utilize terror and bring the dissidents in line. The Reverend is empowered to use his criminal gang to enforce the Junta’s policies and maintain supremacy of the military.
Everything comes to a head when Marcus and his co-conspirators are picked up by The Reverend. The Junta wants to know the extent of the plot, who else is involved and where they are hiding the students. The Reverend starts forceful interrogation of Marcus and Father Bert.
Amid all the chaos and turbulence, Hurricane David strikes. Floods and food shortages result. A rumour spreads that the Junta has killed Father Bert and riots, arson and looting break out. The military has to intervene again but the situation seems to be deteriorating rapildy.
Read more
Other Formats: Paperback