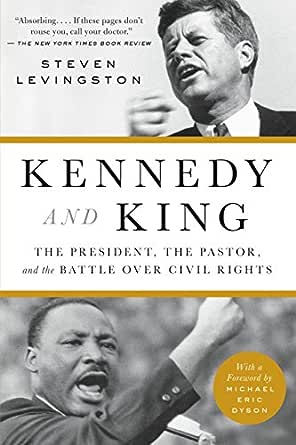 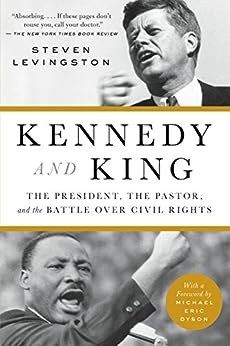 Kennedy and King: The President, the Pastor, and the Battle over Civil Rights Kindle Edition

[In] this bracing dual biography, Levingston (Little Demon in the City of Light) adds an upbeat, humanistic flavor to the intersecting lives of his subjects. This book will hold wide appeal.-- "Library Journal"

Levingston's writing on King is unfailingly perceptive and eloquent... Thanks to Levingston's impressive narrative skills, the spectacle of this president confronting the most divisive issue of his day is consistently fascinating.-- "Christian Science Monitor"

Kennedy and King tells the story of two brilliant leaders who injected new meaning into the veins of American society. Together, their influence created a moral imperative that changed the U.S. and the world. Levingston's book is both historical and visionary. By reminding us of these great leaders and their accomplishments, this book will fuel your passion for the new work we still need to do in our society today.-- "Congressman John Lewis (D-GA)"

As the moral courage of Martin Luther King Jr. came up against the political instincts of President John F. Kennedy--with both men trying to save their nation--a new history was set in motion. It's all brought to fascinating light in Steven Levingston's righteous book.-- "Wil Haygood, New York Times bestselling author of Showdown: Thurgood Marshall and the Supreme Court Nomination that Changed America"

Comparing and contrasting disparate historical figures can easily be artificial, misleading, even gimmicky. Steven Levingston, however, has walked this tightrope magnificently. In his important new book, Kennedy and King, the rest of us get an unusual chance to study each leader in part through the other over a tumultuous, pivotal eight-year period. As is always the case with major contributions to our understanding, Levingston's is grounded in diligent research and detail.... Levingston's account of Birmingham, which chronicles the city's impact on each protagonist, is simply riveting. He is especially illuminating in following Kennedy's final steps when his attorney general brother nudged him to become 'the nation's first civil rights President.'-- "Thomas Oliphant, The Washington Post"

Steven Levingston's fascinating Kennedy and King reveals one of the most crucial American political relationships of the twentieth century, demonstrating the vital importance of great leadership during the time when the American civil rights movement was in the balance.-- "Michael Beschloss, New York Times bestselling author of Presidential Courage and NBC News Presidential Historian"

Levingston ... contrasts the unstoppable forces of King's soaring oratory, Christian principles, and moral authority with the immovable objects of Kennedy's privilege, political calculation, and presidential power. Their push and pull unfolded in a cultural cauldron that encompassed the Montgomery bus boycott, the freedom rides, King's stints in jail, the children's crusade in Birmingham, Gov. George Wallace's segregationist stand at the University of Alabama, and the march on Washington.-- "Publishers Weekly (starred review)"

Insightful and well-crafted.... At a time when cynicism about our political system abounds, [Kennedy and King] reminds us that outsiders can prod those in power toward progress and reform.-- "Wall Street Journal"

Expertly highlights the interconnections between these two seminal figures in mid-20th-century America... Dual biographies are hard to pull off, but Levingston does it splendidly in his portrait of two divergent personalities finally coming together, if only briefly, over matters of gravest consequence.-- "Dallas Morning News" --This text refers to the audioCD edition.

Steven Levingston is the non-fiction book editor of the Washington Post and, most recently, the author of Little Demon in the City of Light. He has lived and worked in Beijing, Hong Kong, New York, Paris, and Washington and reported and edited for the Wall Street Journal and International Herald Tribune.

Dan Woren is an American voice actor and Earphones Award-winning narrator. He has worked extensively in animation, video games, and feature films. He is best known for his many roles in anime productions such as Bleach and as the voice of Sub-Zero in the video game Mortal Kombat.