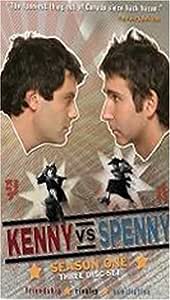 Kenny Vs. Spenny - Season One

Canada's odd couple of competition - best friends pitted in battle - glory for the winner and humiliation for the loser. Roommates and filmmakers Kenny and Spenny (Hotz and Rice respectively) have torqued up the old playground challenge to a whole new level of humiliation and degradation. From the physical (Who can lose the most weight?) to the psychiatric (Who is the sanest?) to the psychotic (Who can sit on a cow the longest?), Kenny vs Spenny turn the tables, cameras and just about everything else upside down in twenty-four no holds barred bouts of hilarity in the most unique offering in the "reality competition" genre. Kenny is the self proclaimed 'devious genius,' a schemer and a cheater - "I'm like the tormenting brother he never had and probably didn't want." Spenny is neurotic, stressed-out, ethical and by-the-book - "Winning one by playing fair is more satisfying than winning a thousand times by cheating."

And so the battle of GOOD vs EVIL rages on!

4.5 out of 5 stars
4.5 out of 5
46 global ratings
How are ratings calculated?
To calculate the overall star rating and percentage breakdown by star, we don’t use a simple average. Instead, our system considers things like how recent a review is and if the reviewer bought the item on Amazon. It also analyzes reviews to verify trustworthiness.
Top reviews

Nate
5.0 out of 5 stars Best Show Ever? Methinks It Is.
Reviewed in the United States on July 27, 2006
Verified Purchase
Is 'Kenny Vs. Spenny' the greatest television show in the history of television? Probably. Is Kenny Hotz one of the most interesting people in the world? Yep. Does Spencer Rice deserve the constant humiliation he is subject to? Absolutely.

The show's concept is basically this: two Canadian best friends challenge each other to various competitions. The winner of said competition gets to humilate the other. Its a fairly simple premise that allows the two friends to try and outdo one another in anyway they can think of. First, we have Kenny Hotz: deviant mastermind who loves video games, not bathing, and going to any lengths to destroy his best friend, Spenny. Secondly, we have Spencer 'Spenny' Rice: a neurotic, by-the-book goon who deserves to lose. And lose he does.

While all 24 episodes are hysterical, some of the highlights of season one are: 'Who Can Gain The Most Weight?', 'Who Is The Better Boxer?', 'Who Is Saner?', and 'Who Can Live In A Van The Longest?'.

This set contains 24 episdoes of the first season of the show. Watch as Kenny humiliates Spenny...you will love it. Guaranteed. 'Kenny Vs. Spenny' is probably the funniest television show in the history of the world.

MarteeN36
5.0 out of 5 stars Perfect!
Reviewed in the United States on May 9, 2019
Verified Purchase
Got dvd today. a little scratched but i hope it plays.
Read more
Helpful
Report abuse

mike
5.0 out of 5 stars what are you waiting for...order now.
Reviewed in the United States on September 5, 2012
Verified Purchase
I was first introduced to this show about 6 years ago. I saw a couple episodes on comedy central in the states. The show had me in stitches. I have never seen a reality comedy push the envelope so far and be so delightfully hilarious.

Years passed by without hearing anything about the show. I figured it was cancelled. Had I known there were multiple season I would have moved to Canada to watch them. Easily my favorite tv show of all time. That is not some idle remark. I've carefully thought about it since I watched the first few seasons.

If you like to laugh at typical guy humor than you'll love this show. The only question you need to ask yourself is: Buy the whole series or buy each season individually over time? I would recommend buying the entire series...it saves on shipping costs.
Read more
Helpful
Report abuse

Emily
5.0 out of 5 stars This is my favorite show
Reviewed in the United States on March 25, 2012
Verified Purchase
I think this is the funniest show I've ever seen... sometimes I think you can tell some of the scenes are staged, but sometimes things get so weird- weird in a not very funny way- that you have to really believe this is genuine for the most part. Season 1 has some really awkward episodes that I could barely get through but in the end it is worth seeing them all. For example, I hated the episode where they try and get the girl to like them, but when she makes a huge deal about spenny not feeding the dog chocolate, it was so weird! It made up for everything. My favorite episode was the one where they get the kids to like them. I love it!
Read more
Helpful
Report abuse

F. Rodriguez
5.0 out of 5 stars Funniest reality show ever!
Reviewed in the United States on September 2, 2006
Verified Purchase
The competitions are silly, the humiliations are hilarious (and often brutal), and the strategies employed to win border on criminal. Kenny Hotz is a brilliant, ruthless, unscrupulous competitor. Spenny is the honest guy that believes in hard work and perseverence. The clash of personalities is yet another element that adds to the hilarity. I have never been so entertained by a reality show. This is a must see and must own. Can't wait for season 2 to come out on DVD!!!
Read more
7 people found this helpful
Helpful
Report abuse

Kyle kingston
1.0 out of 5 stars Wrong disks
Reviewed in the United States on May 21, 2020
Verified Purchase
Great show, I used to watch it all the time.
I purchased season one, I get disk one of that season.
disk 2 of season four and disk 1 of season 3.
😡
Read more
Helpful
Report abuse

usaDiabeticTop Contributor: Golf
5.0 out of 5 stars A+
Reviewed in the United States on June 23, 2013
Verified Purchase
Amazing, a lot of episodes on these discs. The discs wouldn't play on my Xbox but work fine in my computer, which was a little disappointing, but if your a fan of the show i recommend this set over the vol. 1 set put out by Comedy Central
Read more
Helpful
Report abuse

C. Gooner
5.0 out of 5 stars The funniest thing in ages!
Reviewed in the United States on October 27, 2005
Verified Purchase
We got this series in the UK last year, We had previously had an English version so I was unsure whether to bother watching this "Rip off". It was only when I saw the first one that I realised how much better Kenny Vs Spenny was than our one, I only later found out that this was the original.

I have never once been disappointed by a single episode and am firmly in the Kenny camp of winning at all costs.

Highlights for me are the Blindfold episode, the Putting on a live show, the Looking after a baby and the one where they date the same women. Absolute legends and great to hear they have just started to air the new series over there, hopefully we'll get it soon. Buy this DVD and enjoy.
Read more
6 people found this helpful
Helpful
Report abuse
See all reviews

Emma C
5.0 out of 5 stars Funniest Men To Come Out Of Canada!
Reviewed in the United Kingdom on September 13, 2010
Verified Purchase
This is probably the funniest show i have EVER watched. I was introduced to this show by a friend. I didnt care for it much at first, but once i started watching them again, i fell in love with the show!! Season 1 is full of tricks which Kenny pulls off brilliantly and there isnt a moment where you wont laugh. 5 STARS!!
Read more
Report abuse

Bryan
5.0 out of 5 stars Five Stars
Reviewed in Canada on May 16, 2016
Verified Purchase
one of the best Canadian made shows out there in my opinion.
Read more
Report abuse
See all reviews
Pages with related products. See and discover other items: spencer breslin movies, Reality Kings DVD'S