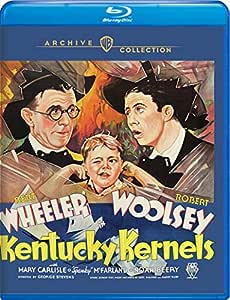 Bert Wheeler and Robert Woolsey team up with Our Gang star Spanky McFarland in this riotous slapstick comedy. Out-of-work vaudevillians Willie (Wheeler) and Elmer (Woolsey) somehow become Spankys guardians and think they have come into a fortune when Spanky inherits a farm in Kentucky. What they dont know is that the farm sits directly in the line of fire in a feud between the Milfords and the Wakefields. Now, as Willie falls in love with the beautiful Gloria Wakefield (Mary Carlisle) and the pair manage to arrange a truce, young Spanky reignites the war between the two families. It all adds up to a good vehicle for the team with a great slapstick finale (Leonard Maltins Movie Guide).

Joseph L. Ponessa
5.0 out of 5 stars SOO Glad to Get this Blu-ray
Reviewed in the United States on September 19, 2020
Verified Purchase
I believe that I have or used to have all the Wheeler & Woolsey laserdiscs, and just loved them all. Perhaps my favorite is Diplomaniacs, an insane parody of 1930s League of Nations diplomacy, with the wild quartet of German diplomats. Once I had a visitor who had been in the Uruguayan mission to the United Nations, and I tried to show him the film, and he absolutely detested it. I didn't try to show him any more. If you love one, you'll love them all, and vice-versa. So why don't you get this one and give it a try? That may inspire the owners of the franchise to feed out a little line, and snare us Hook Line and Sinker.
Read more
2 people found this helpful
Helpful
Comment Report abuse

Mark Martucci
3.0 out of 5 stars One of their better films, but that's not saying much. They just aren't funny to me.
Reviewed in the United States on November 28, 2017
Verified Purchase
The transfer is fine, but W&W just don't click with me. I like some more than this, but the only one I really would give a 5 star rating would be THE DIPLOMANIACS which was atypical of them. I watched most of their films lately and if I hear Wheeler do his "Woah" exclamation one more time, I may shoot somebody!!
Read more
Helpful
Comment Report abuse

Randy E. Halford
5.0 out of 5 stars Two kernels head South
Reviewed in the United States on March 21, 2014
Verified Purchase
Right after Wheeler & Woolsey reached their zenith with "Cockeyed Cavaliers", the boys ended 1934 with this little gem. The cast includes some familiar faces in Noah Beery (as the Colonel) & Margaret Dumont (on loan from the Marx Brothers; her role here is regretfully short). But what makes "Kentucky Kernels" really pop is Bert & Bob's co-star: any picture with scene-stealing Spanky "Our Gang" McFarland can't be all bad. The boys play down-on-their-luck vaudevillians who suddenly inherit little Spanky who inherits some Kentucky land. And so, they head down South, run afoul of the Colonel, Bert falls for the Colonel's daughter, and land themselves in the middle of a longtime feud between the Milfords & Wakefields.
The running gag with Spanky's compulsion of breaking glass gets lots of laughs as it puts poor Bert & Bob in hot water with authority figures. It's all climaxed by one of the most riotous W&W endings, including a wild ride on a carriage pulled by a moonshine-drunken horse, and the machine gun gag that's one of their cleverest moments. The closing gag with Bob deliberately driving through a glass house is a fitting ending.
Definitely one of their best! And P.S.---PLEASE release "Cockeyed Cavaliers" to DVD!!

Ricky
5.0 out of 5 stars Kentucky Kernels
Reviewed in the United States on April 16, 2012
Verified Purchase
One of W & W's gentle comedies after the production code crack down in 1934. It's not as crazy as Cockeyed Cavaliers or Hips, Hips Hooray but it's enjoyable enough, and it's nice to see Spanky in a non Our Gang role. The best thing about this version is the print used for the transfer. Kernels has been available since the early 1990's on VHS and Laser Disc, and those transfers are good but the new DVR is amazing. A new 35mm positive print seems to have been used, and there is some minor pre print wear but it's as sharp as a tack. It even has the Production Code and NRA logo at the head. The best thing about these DVR's is the fact that DVNR is not used. You get a direct 35mm transfer without the heavy handed DVNR some companies use to "restore" prints. Worth every penny. Now how about releasing "Cockeyed Cavaliers" and "The Nitwits"...
Read more
6 people found this helpful
Helpful
Comment Report abuse

Alex Udvary
2.0 out of 5 stars Wheeler & Woosley's Best Comedy
Reviewed in the United States on July 20, 2004
When I was younger this was the first movie I saw with the comedy team of Wheeler and Woosley. I was very young and not really interested in their comedy per se.

Yesterday on TCM they paid tribute to Thelma Todd and showed two movies featuring this comedy team. I watched them and instantly remembered the first time I saw them. After watching both films shown on TV I went out to rent this one again.

Bert Wheeler and Robert Woosley to me are not a great comedy team. Their biggest problem is their poorly developed characters. There is nothing distinctive about them. Nothing that really sets the two of them apart. They both in a way play the same character. Woosley is the funny man and Wheeler is the straight man, and often in their films the leading romantic man, don't ask me why.

But the team doesn't have that extra something that would seperate them from Laurel & Hardy or the Marx Brothers. Take Laurel & Hardy for example. They played two different characters. They set an instant contrast to each other. I'm honestly not sure how to explain these characters. And doesn't Woolsey seem to have stolen George Burns' screen persona? The large glasses, the cigar, raspy voice, crass attitude.

I guess they are both hapless, well intending, but always finding themselves in trouble buddies. But, that could describe every comedian that every lived from Chaplin, Jerry Lewis, W.C. Fields, and Woody Allen.

"Kentucky Kernels" though from what I've seen, and I've only seen three of their movies, they are all rare, is my favorite. Though it suffers the same problems their others works have faced.

The movie finds Wheeler and Woosley taking custody of an orphan (played by "Our Gang's" Spanky) after the foster parents go on a honeymoon. Soon the two find out Spanky has just inherited a Kentucky estate. Only when they arrive they find they are caught in the middle of a family feud.

The problem the movie faces is the good ideas come first, thus making the rest of the movie a bit hard to watch. The middle gets rather slow. Woolsey has some good but maybe dated (?) wise-cracks and one-liners, but I enjoyed them. Also, as I have already stated the team doesn't hold my interest. I don't have too much fun watching them.

This plot or one close to it has been used in several comedies before. One of the most effective was Buster Keaton's "Our Hospitality". Keaton had a better screen persona and the movie has many clever comedy gags.

The film was directed by George Stevens, probably best known for films like "Giant", "A Place in the Sun", and "Shane" but when he started by directed comedies and musicals such as "Vivacious Lady", "A Damsel in Distress" and "Swing Time".

The movie also has a good cast including Noah Berry (Wallace's brother), Margaret Dumont (Undoubtedly known for her turn in many Marx Brother movies) and watch out for Charlie Hall (who would play foil to Laurel & Hardy).

To be honest and not sound so critical I think Wheeler and Woosley would have had quite a different impact on me had they made 2 or 3 reelers. Their style was much more suited for that. ** 1\2 out of *****

Bottom-line: Typical Wheeler & Woosley comedy, that suffers the same problems their comedies do. Has some funny moments, but doesn't quite deliver the goods. Slows down in the middle.

Scott T. Rivers
VINE VOICE
3.0 out of 5 stars Wheeler & Woolsey Go South in More Ways Than One
Reviewed in the United States on July 5, 2015
Toned down by the restrictive Production Code, the vaudevillian spirit of Bert Wheeler and Robert Woolsey shines intermittently in this RKO hillbilly romp. Director George Stevens lends his customary polish to a thin script — highlighted by a wild slapstick finish. A surprisingly obnoxious Spanky McFarland takes a break from Our Gang to wreak havoc on the duo (Baby LeRoy he is definitely not). Wheeler & Woolsey display more chemistry with Margaret Dumont than the destructive Spanky, who should have stayed on the Hal Roach lot. Though their biggest box-office hit, "Kentucky Kernels" (1934) remains one of the team's lesser comedies.
Read more
2 people found this helpful
Helpful
Comment Report abuse
See all reviews