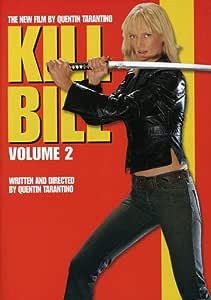 The second half of Quentin Tarantino's serialized film Kill Bill. The Bride is back and her job is only half done. She must still confront two more of her former co-workers before she faces her ex-boss, Bill himself. But, the Bride's quest becomes complicated when her past catches up to her.

4.8 out of 5 stars
4.8 out of 5
4,074 global ratings
How are ratings calculated?
To calculate the overall star rating and percentage breakdown by star, we don’t use a simple average. Instead, our system considers things like how recent a review is and if the reviewer bought the item on Amazon. It also analyzes reviews to verify trustworthiness.

Victor OrozcoTop Contributor: Action Figures
5.0 out of 5 stars Niña Hermosa
Reviewed in the United States on February 2, 2018
Verified Purchase
I've never been a fan of Quentin Tarantino's works. I saw him as an actor in From Dusk Till Dawn, and I saw bits and pieces of Pulp Fiction. I sat down to see Kill Bill Vol.1 from start to finish and was disgusted.

Then I sat down to watch this and WOW. Someone said that Tarantino intended to make one movie, but this truly feels like he made this into two movies all along. One was a Japanese revenge flick with an Anime element to it. Two is considered more of a Western, and I'm more inclined to watch a good Western.

Taking place after the events of Kill Bill Vol 1, this one adds some light to the massacre that led to the Bride seeking revenge on assassin squad leader Bill. It wasn't as straight up kill, but a fact finding mission that led to a highly exaggerated conclusion. Bride takes on the last two names prior to taking on Bill. Bill's washed up brother Budd, and the twisted and leggy Elle. Finally Bill. That conclusion was so well written and yet so unexpected. I am truly convinced that now that I've seen Tarantino's works, that I have an idea of his worst but also at his best. And this movie is truly one of his best.

Uma Thurman is not the strongest of actresses, but she does a great job with a great script. Tarantino can make anyone shine, and David Carrradine, a man who's career was defined from the Kung-Fu series in the 1970's fizzled after so many years was reignited to great success as the spurned, former lover of the Bride. The movie has great action, good use of music and some wonderful scenery. Truly a great movie and I'm glad to have it on Blu-Ray.

joel wing
TOP 500 REVIEWER
4.0 out of 5 stars Much more in depth story than Vol 1 on the relationship between the Bride & Bill
Reviewed in the United States on June 29, 2020
Verified Purchase
Kill Bill Volume 2 was the background to why Volume 1 occurred. The first film was an all out action flick. Volume 2 went back to Tarantino’s bread and butter of in depth dialogue with a few action scenes. Here the Bride (Uma Thurman) finally gets to confront Bill (David Carradine) the father of her child, her mentor, and the man that tried to kill her.

The start of the movie is two monologues. The first by Bill about how cruel he was being in trying to kill the Bride and then the Bride talking about how everything was coming to a conclusion with Bill. Bill has always been the focal point and now you get some background to him.

Gordon Liu also returns this time as Pai Mei who was a villain from 1970s Hong Kong films. His scene with the Bride is worth the price of admission alone. He plays the hard-nosed, old school Asian martial arts teacher that believes bleeding is the best way to transfer knowledge. Liu really gets to shine here and it was great to see him again.

The other stand out supporting character is Daryl Hannah as Elle Driver. She gets a big confrontation with the Bride that is great action sequence.

On the other hand Tarantino got lost in his writing at points. Budd went from being an assassin to working as a bouncer at a strip club with few customers. There’s an entire scene where he gets chewed out by his boss Larry (Larry Bishop) that seems extraneous. If often seems like Tarantino creates full backstories for his characters and just can’t help including them. This was just a short scene in the film but should have ended up on the editing floor.

If you expected Volume 2 to be a continuation of Volume 1 you would be a bit off. Volume 2 had a much more in depth story as it explained the relationship between the Bride and Bill.
C
Read more
One person found this helpful
Helpful
Report abuse

DMG
5.0 out of 5 stars Continuum: Kill Bill Volume 2
Reviewed in the United States on September 10, 2015
Verified Purchase
This second installment of the 'Kill Bill' series has "The Bride" continuing on her rampage of revenge with
a few twists and turns. Volume 2 was released about 4 months after Volume One. The two were originally
slated to be one long film but Tarantino was convinced to chop it into two parts.

If you have not seen the first film don't bother with this one. As a matter of fact attempt to watch both in
succession if you can muster the stamina. Both films move along a fairly brisk pace most of the time and
are essentially one film. Together they are about 4 hours in length.

The second one seems to be more talky and less action than the first but that works well. It does not drag
or become boring. You will move deeper into the connections of the characters eventually landing on Bill's
door step and the final confrontation.

Again Tarantino uses an eclectic range of music to help with the mood of the film. He uses country music
as well as selections from Ennio Morricone's western films, the 'Ironside' theme, and at the end, a rock 'n'
roll version of a traditional Mexican song. Eclectic indeed. The music all works well to help underscore the
mood of the scene or scenes. Mr. Tarantino's selection of music is a forte of his.

Uma Thurman (The Bride) was nominated for A Golden Globe Award for Best Actress and David Carradine
(Bill) was nominated for Best Supporting Actor. If you have seen any old 'B' movies that this film emulates
you will understand how well acted the movie is; all players included.

If you disliked Volume 1 don't bother with Volume 2. It has all the same wonderful direction, music, acting
and script that originated from Volume 1. You are not going to see an improved film or a different film but
the film that will let you have fun and be entertained all the way to the finale.

5 more stars for Kill Bill Volume 2 for a total of Ten Stars for both films. Overkill? Yes, but so is the plot and
the body-count. Have fun with this one and make sure you put plenty of real butter on that pop corn.
Read more
2 people found this helpful
Helpful
Report abuse

Paul S. Person
3.0 out of 5 stars Only A Little Better Than Volume 1
Reviewed in the United States on October 13, 2020
Verified Purchase
This is basically a continuation of Volume 1 -- which, if you liked Volume 1, is good news.
However, it does go more into the background of the various characters. This makes it focus more on The Bride and the people she interacts with, and less on the Action Sequences.
There are, however, plenty of Action Sequences.
And it is clear that there was a Movie in here somewhere, struggling to get out.
Read more
Helpful
Report abuse
See all reviews

Islington Lady
5.0 out of 5 stars Fantastic, fabulous .....
Reviewed in the United Kingdom on July 23, 2018
Verified Purchase
Kill Bill Vols 1 & 2 are absolutely brilliant. Love them both. BUT the music for Vol 1 is absolutely the very best. The films are by far the best in this genre - shame there can't be a Vol 3. We can watch these time and time again and never get bored. It is soooooo over the top, but how thoughtful Tarantino was in changing the main scene in Vol 1 of blood, guts and gore to black and white so as not to upset anyone! I could spend hours and hours going on about these films but see them for yourself. It's an enjoyable hoot.
Read more
Report abuse

TopCat
5.0 out of 5 stars great
Reviewed in the United Kingdom on June 15, 2014
Verified Purchase
Like all blu-rays when compared to watching the DVD version or an old video one watching this film is a clearer, more detailed experience and in many cases it's like looking at the film for the first time as the film stock used to transfer to Blu-Ray is usually "worked on" first to get as good a copy as possible. My taste in films may not be the same as yours so if you want to know about this film I suggest that you use the internet to find 2 or 3 reviews by experienced film reviewers and make your judgment whether or not to buy this film. I have watched over 640 films in my life and I rate this one 9/10.
Read more
Report abuse

H. Wilson
5.0 out of 5 stars Kill Bill Volume 2 DVD.
Reviewed in the United Kingdom on December 27, 2012
Verified Purchase
Excellent sequel to K.B. Vol. 1. Not quite the volume of blood-letting as in Volume 1, but you get to find out how Beatrix Kiddo became the highly effective assassin she is. The sexy and very attractive Uma Thurman makes the admittedly fantastic storyline watchable, as do the othe characters, especially David Carradine in the role of the ultimate villain Bill.

ELIZABETH GILBERT
5.0 out of 5 stars very happy
Reviewed in the United Kingdom on January 8, 2021
Verified Purchase
yes very happy with the item the camr before the actuall date thanks.
Read more
Report abuse

Sara Evans
5.0 out of 5 stars Works well
Reviewed in the United Kingdom on December 8, 2018
Verified Purchase
Not much to say about a CD except it works.
Read more
Report abuse
See all reviews