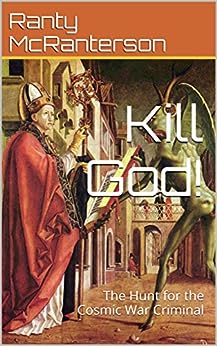 cosine
5.0 out of 5 stars Read it 10 times...and again.Die ritter leben weiter
Reviewed in the United States on May 26, 2021
Verified Purchase
Our entropy is maximum my fellow soul.
From zero we suffered his monstrous thoughts. Revalue all you hold, for he is not with you. Renounce this sickness, this tyranny, this disease that chokes the world.
No Quarter
Read more
Helpful
Report abuse

RK (MK)
5.0 out of 5 stars Get Your Rant On
Reviewed in the United States on January 25, 2018
Verified Purchase
Rant against absurdity. Rage against insanity. Rise above inanity. Ranty McRanterson is here to crack the whip of reason on the backs of the mad masses and to beat you senseless with the harsh cane of reality. Get mad. Get ranty. Stop complacently accepting ignorance and mediocrity. Be bold! Be better!
Read more
One person found this helpful
Helpful
Report abuse

Brad Gumm
5.0 out of 5 stars The End of Insanity
Reviewed in the United States on April 13, 2017
Verified Purchase
This is a book that must be read by every rational person remaining on this planet. It is a book that shows, in crystal clear detail, the EXTREME danger that ALL Mythos religions present to the human species. If humanity is to be in existence within the spacetime material universe for much longer, then it MUST eradicate any and all Mythos religions infecting the human psyche.

To END insanity, to END suffering, to END racism, to END sexism, to END homophobia, to END violence, TO END genocide, to END division, to END intolerance, i.e. to END EVIL, we humans must END Mythos religion. There is no other way. As long as crazy story religions exist, crazy humans will exist, and as long as crazy humans exist, stupidity, insanity and psychopathy will exist. It is precisely human stupidity, insanity and psychopathy that is destroying our world.

So, if you are a clear thinking rationalist, read this book as soon as possible, and then begin working to put an end, once and for all, to human lunacy. Our world is running out of time.
Read more
3 people found this helpful
Helpful
Report abuse
See all reviews

MP
5.0 out of 5 stars Kill Faith. Long live Reason.
Reviewed in Canada on September 7, 2018
Verified Purchase
You are free to read this book and step into a world of numbers and reason.

You are free to deny your free will and live as an automaton. Well. Live it up.