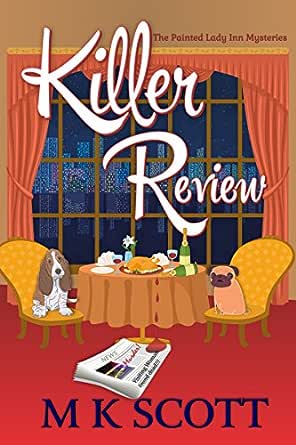 You've subscribed to The Painted Lady Inn Mysteries! We will preorder your items within 24 hours of when they become available. When new books are released, we'll charge your default payment method for the lowest price available during the pre-order period.
Update your device or payment method, cancel individual pre-orders or your subscription at
Your Memberships & Subscriptions
There was an error. We were unable to process your subscription due to an error. Please refresh and try again. 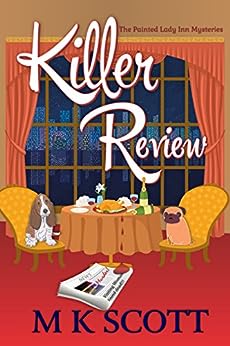 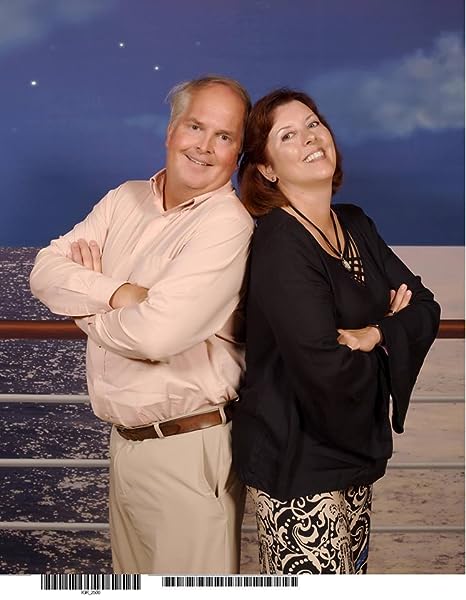 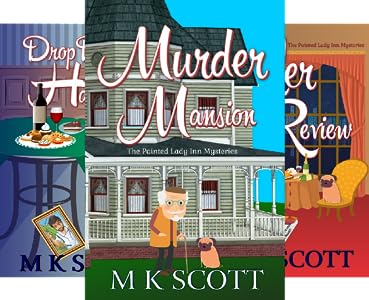 M. K. Scott is the husband and wife writing team behind The Painted Lady Inn Mysteries. Morgan K Wyatt is the general wordsmith, while her husband, Scott, is the grammar hammer and physics specialist. He uses his engineering skills to explain how fast a body falls when pushed over a cliff and various other felonious activities. The Internet and experts in the field provide forensic information, while the recipes and B and B details require a more hands on approach. Morgan’s daughter, who manages a hotel, provides guest horror stories to fuel the plot lines. The couple’s dog, Chance, is the inspiration behind Jasper, Donna’s dog. Murder Mansion is the first book in The Painted Lady Inn Mysteries. Overall, it is a fun series to create and read. --This text refers to the paperback edition.

4.5 out of 5 stars
4.5 out of 5
31 customer ratings
How does Amazon calculate star ratings?
Amazon calculates a product’s star ratings based on a machine learned model instead of a raw data average. The model takes into account factors including the age of a rating, whether the ratings are from verified purchasers, and factors that establish reviewer trustworthiness.

MikiHope
5.0 out of 5 stars The last words in this easy to read book had me laughing out loud!
Reviewed in the United States on July 12, 2020
Verified Purchase
Owning and working a B&B is hard work--and when you are still working as a nurse--it can get really hectic-you need all the help you can get. And when you really are just starting out you need a helper who will work for peanuts and room and board! Donna found someone but he isn't exactly the best worker but he definitely comes in handy in some situations!

When a ruthless food critic shows up in this small town-and ends up staying at the B&B-all the chefs' are in a dither. Janice, a friend and owner of a restaurant, is beside herself. She convinces Donna to follow this food critic--that didn't work our too well. All Donna manages is to get stopped by her policeman friend!

Now Donna has her brother and sister-in-law helping out at the B&B but has NEVER even invited her mother to come see it. Well she becomes desperate, calls Mom and asks for help! Her Mom is quite the character and between helping--tries to set Donna up with men--she wants grandchildren! She also thinks that Donna's friend the police officer is dragging his heels and feels that making him jealous might------Donna is pretty sure the only reason this guy hangs around is for her cooking.

The food critic is found dead--and Donna has to help to find the killer because really death is not good advertising for a B&B!!

Well I guess Mom's sometimes really do know best----The last words in this easy to read book had me laughing out loud---because Donna was right also!!

Ellen Oceanside
TOP 1000 REVIEWER
4.0 out of 5 stars Enjoyable & Fun To Read
Reviewed in the United States on May 1, 2020
Verified Purchase
A Food Critic one or two remarks in her column could make or break a chef.
When she checks into The Painted Lady Inn, it throws Donna. She is demanding and rude. With her good help, meddling mother, interfering relatives. When murder happens, they step up to solve. It is funny, quirky characters, and plain fun to read and enjoy.
Read more
Helpful
Comment Report abuse

George
5.0 out of 5 stars A great read
Reviewed in the United States on October 27, 2016
Verified Purchase
Cozy Mystery fans will love the series. It’s packed with wacky characters, interfering relatives, small town antics, delicious recipes, and a murder mystery. Donna, the inn owner, is determined to help even when the police don’t want her assistance. Her mother meddles big time in Killer Review causing all sorts of hilarious complications.

A fun read that is bound to have you turning the pages as you chuckle.
Read more
2 people found this helpful
Helpful
Comment Report abuse

leta
5.0 out of 5 stars Love this series
Reviewed in the United States on June 26, 2020
Verified Purchase
I have read the first 4 books in this series, which is unusual for me. Normally with cozies I read 2-3 and then move on to a different author for a change in style. This author has developed the story line and characters throughout the series and so keeps it fresh and interesting. I look forward to seeing where they go.
Read more
Helpful
Comment Report abuse

Diane Rapp
5.0 out of 5 stars A B and B to die for
Reviewed in the United States on November 19, 2019
Verified Purchase
I dream of staying in a place like The Painted Lady. The food sounds wonderful and the staff is clever enough to solve murders. If you've ever wanted to wrong a critic's neck, this story is for you. Plenty of mystery and interesting characters.
Read more
Helpful
Comment Report abuse

Einsam
5.0 out of 5 stars The Critic Got a Bad Review
Reviewed in the United States on October 17, 2016
When restaurant critic J.E. Muscovy checks into the Painted Lady Inn, Donna is caught off guard by her attitude. She is very demanding and has the reputation of giving scathing reviews for restaurants everywhere she goes. Donna's friend, Jane, who owns The Croaking Frog, wants to know if the critic is planning to do a review of her restaurant and expects Donna to supply the answer.

Donna tries to follow the critic to the Little Bit of Paris cafe, but loses her. When she finally reaches the cafe, the waitress she speaks with is not sure if the critic was there or not.

The next day, J.E.'s rental car is found abandoned with a body found a short distance away. A purse and driver's license inside the car indicate that the body may be that of the critic and the police are not sure if it is murder or suicide.

Donna is certain that with the critic's attitude, she would not commit suicide. Then when she goes to clean her room, she discovers a note listing four restaurants. This first restaurant is Jane's, The Croaking Frog. The second is Sylvester's Salon, but this one is crossed out for some reason. Sylvester is a former flame who also has a reputation for chasing anything in a skirt. The third is one that relocated from New Orleans following a scandal. The fourth is in another city and does not seem to fit the current picture.

So who killed the critic, Jane Ellen Muscovy? Did she actually commit suicide? Was it her former flame, who recently proposed to his current girlfriend? Maybe it was somebody else who was trying to protect their restaurant's reputation? Or is there more here than meets the eye and does somebody else have a good reason to want the critic dead!

The characters are well-developed and the story has plenty of twists and turns. Once started, the book is hard to put down
Read more
2 people found this helpful
Helpful
Comment Report abuse

29
4.0 out of 5 stars Book three in the series
Reviewed in the United States on September 29, 2019
This is book three in The Painted Lady Inn series. Although not quite up to the incredibly high standard that books one and two met it was still a good story with a good ending. Most of the same players were on board with the introduction of a couple of new character who are very entertaining.

Donna, the inn owner has another mystery to solve but this time her detective suitor/friend accepts her help along with her wonderful cooking, of course. We get to meet Donna's mother in this book. The author has done a great job rolling a lot of the typical traits you'd expect along with a touch of sexual prowess for a humorous addition to the gang.

All in all it is definitely worth your time to read and I recommend it. I received an ARC copy of the book but this is my honest opinion.
Read more
Helpful
Comment Report abuse
See all reviews from the United States