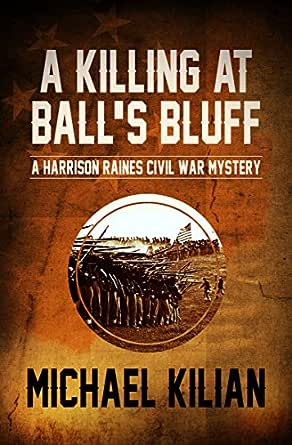 You've subscribed to The Harrison Raines Civil War Mysteries! We will preorder your items within 24 hours of when they become available. When new books are released, we'll charge your default payment method for the lowest price available during the pre-order period.
Update your device or payment method, cancel individual pre-orders or your subscription at
Your Memberships & Subscriptions
There was an error. We were unable to process your subscription due to an error. Please refresh and try again. 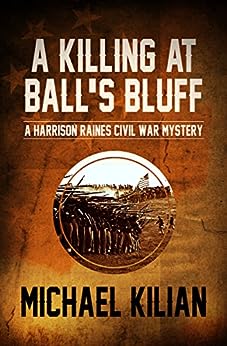 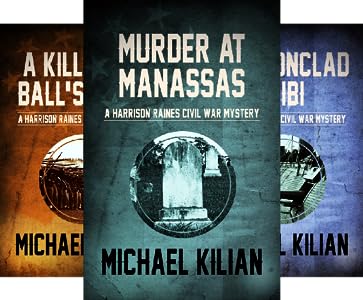 Michael Kilian has set an interesting goal for himself: to chronologically place Virginia gentleman and secret Pinkerton agent Harrison "Harry" Raines in the thick of every major battle of the Civil War and, once there, have him solve a mystery connected thereto. After Harry's fine debut in Murder at Manassas, A Killing at Ball's Bluff sees Harry assigned by the fledgling Secret Service to safeguard the life of Abraham Lincoln's best friend, Col. Edward Baker. But Baker, for reasons unknown, foolishly toys with mortal danger and not surprisingly stops a bullet. As Harry watches in horror from a short remove, a Southern officer appears from the mist, spurring headlong toward the fallen Baker.

Harry loosed a shot, but it was hasty and went wide, even though the mount and rider now seemed to tower over him. The officer yanked the animal to a sudden stop and, ignoring Harry, leaned down over Baker, his horse's chest almost in Harry's face.

There were five quick gunshots from the Confederate's weapon, and then the white horse and rider leaped and dashed away. Harry flung himself down to Baker's side--far, far too late. Every one of the five shots had found its mark. The president's friend was as dead as any man on that field.

This was not war, this was murder--but tell that to the marines. After all, Raines is a Southerner, an intimate of the infamous Southern spy, Rose Greenhow, the son of a plantation-owning slaveholder, and the brother of two Southern officers. And he lives at the National, the Washington hotel favored by secessionists. If you've guessed that, given these tidbits, Raines's Northern handlers are soon smiting their foreheads, yelling "Stupid! Stupid! Stupid!" you've guessed right. Harry's become a man without a country, wanted by both the North and the South, and it's up to him to solve Baker's murder or suffer the inevitable consequences.

Kilian guides his hero with much skill and ample wit. Major characters are finely limned, dialogue is lively and crisp, battle scenes are as engaging as they are truly frightening. It's a sure thing for John Jakes regulars, historical fans, and Civil War subgenre aficionados--and anyone else who likes their mysteries with a heavy dose of thrills. --Michael Hudson --This text refers to an alternate kindle_edition edition.

Kilian, a columnist and Civil War buff, is definitely on to something in his second murder mystery set against the carnage of the Civil War. Again, his protagonist is the guilt-ridden Harrison Raines, and again Kilian effectively captures the near absurdity of seeking to bring a lone murderer to justice while thousands are "legally" slaughtered. Kilian's use of historical detail is accurate and pertinent without detracting from what is, essentially, a tightly constructed, well-written, and suspenseful whodunit. Raines, a relentless but all-too-human hero, is an intriguing character who can withstand the scrutiny of subsequent episodes in what promises to be a fine series of novels. Both Civil War and mystery fans will appreciate Kilian's grasp of the genres of historical fiction and mystery. Jay Freeman
Copyright © American Library Association. All rights reserved --This text refers to an alternate kindle_edition edition.

Michael Kilianis a Washington, DC correspondent for the Chicago Tribune and the author of numerous books, including the Harrison Raines Civil War Mysteries. His family includes early settlers of Virginia and New York, and Union soldiers who died at Fredericksburg and fought at Gettysburg on Little Round Top.

“The story line is strong and the research is impeccable so this is bound to please fans of mysteries and historical novels.” —Romantic Times on Murder at Manassas

Kindle Customer
4.0 out of 5 stars In the Fog of War....
Reviewed in the United States on March 15, 2020
Verified Purchase
A murder on the battlefield propel Harrison Raines into a mystery that involves passion, gender, and identity, even as he is trying to figure these things out for themselves....
Read more
Helpful
Comment Report abuse

Kindle Customer
5.0 out of 5 stars Great
Reviewed in the United States on August 14, 2016
Verified Purchase
This book presents a mystery in an historical setting of great importance to our country. The characters are realistic and likeable. The plot is solid and includes mystery, romance, war, and unrequited love.
Read more
Helpful
Comment Report abuse

maureen bell
5.0 out of 5 stars Great read
Reviewed in the United States on February 7, 2019
Verified Purchase
Love this series. A must for every civil war buff
Read more
Helpful
Comment Report abuse

Old Guy
5.0 out of 5 stars Pretty well researched
Reviewed in the United States on December 2, 2012
Verified Purchase
This series is pretty well researched, and with the humor of the sometimes successful agent, there is some history brought to life too. The feel and flavor of Washington and environs during the war is well done.
Read more
Helpful
Comment Report abuse

Amazon Customer
5.0 out of 5 stars Teriffic historicalmystery
Reviewed in the United States on January 9, 2001
In 1861, the initial encounter of the Civil War is fired at Fort Sumter and the South wins the first real encounter at Manassas. Harrison Raines, son of a Virginia plantation landholder who owns slaves, broke with his family and now resides in the federally controlled Washington DC. Area. In order to prove his loyalty to the northern cause and his anathema towards slavery, Harry allows Pinkerton to induct him as a captain in the newly formed Secret Service.

Few know what Harry does for a living as he acts as if he is a southern sympathizer. When he is almost killed, Harry retreats to his horse farm to wait safely for further instructions, which comes from his friend Templeton Saylor. Harry must go to Ball's Bluff to guard Colonel Baker, who dies anyway in the heat of battle. Harry is accused of treason and jailed, but escapes. He knows he is a man without a country neither the Union nor the Confederacy wanting him unless he can prove his innocence or guilt.

Although this novel is labeled a "Harrison Raines Civil War Mystery," the tale is really more a spy thriller than a who-done-it, though detective elements are in the tale. The plot contains agents, double agents, traitors, and an assortment of support cast abetting the spies. Actions run the gamut with dishonor not uncommon. Michael Kilian's novel contain some of the most fascinating war drama scenes, vividly and authentically described so that the audience can picture Spielberg saving Harry Raines.

Mark Baker - Carstairs Considers
HALL OF FAMEVINE VOICE
4.0 out of 5 stars A Little Long Winded, But Still a Great Mystery
Reviewed in the United States on November 11, 2002
Harry Raines is finding life in Washington during the Civil War difficult. A Southerner opposed to slavery, he tries to stay as neutral as possible, even with his new job in the Secret Service. But trouble seems to find him. Someone's shooting at him on the street. Then he's assigned to guard Colonel Edward Baker, one of President Lincoln's best friends. This is a nearly impossible task in the midst of battle, but when the Colonel is killed in cold blood, Harry finds himself accused of the crime. Escaping from jail, he must stay one step ahead of his former co-workers to clear his name.
This novel, like its predecessor, provides a fascinating look at life during the Civil War. Real people are liberally sprinkled throughout, and I greatly enjoyed meeting their fictitious personas. I especially like the way Lincoln is portrayed in his few appearances. The fictitious characters are interesting as well. The plot itself seems to loose its way at times, but all the pieces to come together for a climax that includes some interesting twists.
With the characters being agents and counter-agents, the book takes on the feel of a spy novel at times. Yet, the plot includes enough interesting twists to make it a good mystery as well. Anyone interested in this time period will greatly enjoy this series.
Read more
Helpful
Comment Report abuse

White kitty
5.0 out of 5 stars Civil War must read
Reviewed in the United States on February 28, 2018
I have read all of Michael Kilian books. They are interesting and have wonderful chacters I urge you to buy if you are a Civil War history buff
Read more
Helpful
Comment Report abuse
See all reviews

Shady
5.0 out of 5 stars Michael Killian
Reviewed in the United Kingdom on October 7, 2012
Verified Purchase
This item was received in very good condition. My husband has not had chance to read this book yet but has been reading previous Michael Killian (Harrison Raines Civil War Mysteries) since July and tells me they make brilliant reading.
Read more
Report abuse
See all reviews