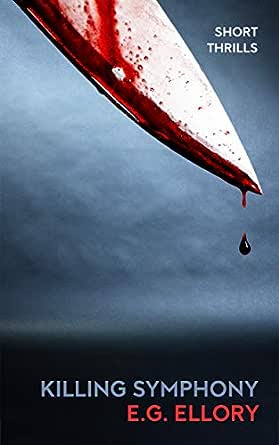 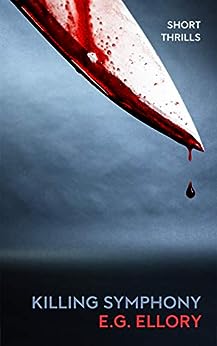 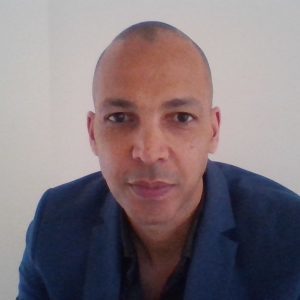 4.8 out of 5 stars
4.8 out of 5
15 customer ratings
How does Amazon calculate star ratings?
Amazon calculates a product’s star ratings based on a machine learned model instead of a raw data average. The model takes into account factors including the age of a rating, whether the ratings are from verified purchasers, and factors that establish reviewer trustworthiness.
Top Reviews

Ron K
4.0 out of 5 stars Art that Will Kill You
Reviewed in the United States on June 9, 2019
Verified Purchase
Killing Symphony is a serial killer short story of 32 pages by E. G. Ellory. It is part of a planned series, Short Thrills. The publication is called Book 1, even though it is a short story. It is not available on Kindle Unlimited and sells for USD 0.99 on Amazon. This reading is my second examination of the writing style of E. G. Ellory before I decide to add my name to his list of advance readers. Published in August 2018, it is followed by Ghostwalking, almost one year later.

Readers learn of David Hill, an assassin for fun with an artistic bent. When he feels the rage, he kills. Not only does he take trophies; he keeps the entire corpse of his victims and arranges them in artistic ways. Is that the reason “Symphony is in the title? No; to find out the reason for the title, read the short story.

David has rented a room in a house from a recluse who prefers minding his own business. Bill’s preferences have enabled David to remodel the basement into a type of artist’s gallery. Gallery visitors did not leave but become part of the art. David’s collection was coming along well as he collected several specimens for his collection. Each time there was a visitor or new tenant who rented a room from Bill, David’s group of artistic creations expanded.

There was one visitor who did not stay long enough to get David’s attention. Julie was a nurse who occasionally looked in on Bill. Once David had killed Bill, that was not going to happen. Julie continued to stop by, and David saw her as another art resource. David made a mistake.

To know what happened, read the short story. I found this story better developed than Ghostwalker and gave it four Amazon stars. Based on the writing style I saw in this story; I will volunteer to add my name to E. G. Ellory’s advance reader list. Ellory has a 128-page novel, First Storm, available for pre-order on Amazon and scheduled to be published June 11, 2019.

Teresa fronek
5.0 out of 5 stars Very clever! It will give you chills!
Reviewed in the United States on September 18, 2018
Verified Purchase
I really enjoyed this "serial killer thriller" ! Our main character, we discover, is an adept killer who selects his victims, the weapon, the location and choreographs everything involved in his rather morbid pastime; much like a symphony! In this short story, we follow him as he tracks down and murders one victim, so that we are able to get a glimpse into his eerie world. There is a wonderful twist at the end and if I had to say anything negative about this story, it would be that I wished it were longer,so we could learn what it was that made him into this monster. Excellent short story!
Read more
Helpful
Comment Report abuse

Pamela McK
5.0 out of 5 stars Creepy Serial Killer, is there another kind?
Reviewed in the United States on September 28, 2019
Verified Purchase
It was interesting reading the point of view of the serial killer and how he explained each of his kills. It was quite creepy to go into his mind and experience what he felt and how he set up each killing. I love Ellory's ending, it's perfect. The author did a good job of getting into the Killer's mind to create this short story. It has a kind of psychological Hitchcock feel to it. If you enjoy this genre I believe you will enjoy reading this short story.
Read more
Helpful
Comment Report abuse

Kindle Customer KT
5.0 out of 5 stars A Great Story!
Reviewed in the United States on April 25, 2020
Verified Purchase
A great story. This is the first book that I have read from this author. However it won't be the last. The story kept me guessing until the end. It's a short story but one that I enjoyed. I highly recommend this book and author to you if you enjoy thrillers.
Read more
Helpful
Comment Report abuse

Val Hakanson
5.0 out of 5 stars Scary and macabre
Reviewed in the United States on September 18, 2018
I received this book in return for an honest review. A Killing Symphony shows how 1 Killer meticulously chooses his victim, place of his symphony, and all the minute details. A charming and good-looking man covers the inside of the killer. The symphony starts with the pricking of his finger and a drop of blood. Pretty soon we meet his family and the latest addition. His symphony is not yet done though. The end of a symphony occurs when all movements are complete, and silence occurs. Watch for the chilling twist. The only negative I have to say is that is was too short, I would really like to see this made into a full-length book. It was a great short story read.
Read more
Helpful
Comment Report abuse

Bettyboop
5.0 out of 5 stars E. G. Ellory must read!
Reviewed in the United States on January 18, 2020
The cover and title Killing Symphony is a book I would not be interested in, but with E. G. Ellory on the cover, it became a must read! Mr Ellory captivated me with his Solomon Stone Series. Now this epitome of a great short thrill comes from the mind of a serial killer. His narrative flows smoothly as he expresses his thoughts and feelings. Then, WOW, a twist I never saw coming. Suspense thriller fans, you will love E. G. Ellory’s Killing Symphony!
Read more
Helpful
Comment Report abuse

Pelusa
4.0 out of 5 stars chilling
Reviewed in the United States on September 30, 2018
Rcvd an ARC at no cost to author..(librarything.com) Can I say I got chills!!! Man o man, after reading the last book which kind of bored me this certainly woke me up..We get an account of a serial killer and the way he plans it and how he goes about it..Huh good my friends grab a copy and Enjoy! I don't want to give to much detail so you can experience it yourself..
Read more
Helpful
Comment Report abuse

Maureen H
5.0 out of 5 stars Excellent short story
Reviewed in the United States on August 22, 2019
I'm not a huge fan of short stories, however, this one is fantastic. The detail is wonderful and the story is mesmerizing.It sucked me in at the very first sentence and didn't let go until the last. I think it would actually make a fine novel, if the author ever cared to do that.
Read more
Helpful
Comment Report abuse
See all reviews from the United States

Udo Lueke
5.0 out of 5 stars Thrilling with an unexpected end...
Reviewed in Germany on August 23, 2018
Verified Purchase
An excellent story that draws you into the mind of a psychopath. Thrilling, exciting and engaging from the start with a surprising twist at the end.
Read more
Helpful
Sending feedback...
Thank you for your feedback.
Sorry, we failed to record your vote. Please try again
Report abuse