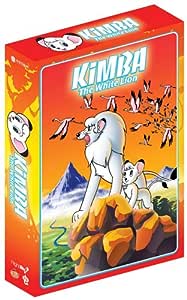 Join Kimba along with his pals Pauly the Parrot, Daniel Baboon, and a charming assortment of other loveable characters, as he follows in the footsteps of his late father, the great lion king, making the jungle a safer, better place for everyone to live. This specially-priced set contains all 52 color episodes, presented in order according to Osamu Tezuka's original storyline. This new DVD set repackages all 52 episodes of Kimba, The White Lion with remastered video (from the previous collections) and an English-language audio track. It is housed in a slim-profile, chipboard collectible box featuring art from the series.

4.5 out of 5 stars
4.5 out of 5
95 global ratings
How are ratings calculated?
To calculate the overall star rating and percentage breakdown by star, we don’t use a simple average. Instead, our system considers things like how recent a review is and if the reviewer bought the item on Amazon. It also analyzes reviews to verify trustworthiness.

Mrs. Mingy "Gooby"
5.0 out of 5 stars Greatly Appreciated!
Reviewed in the United States on June 22, 2015
Verified Purchase
Let me just say that before I recieved this DVD, it left the state, went to about three different post offices and disappeared. We thought we were going to lose it. When it finally arrived at my home, I was relieved and really happy. I love and appreciate this box set even more after that experience! I'm a 15 year old fan of classic anime and manga, especially the works of Osamu Tezuka. I like the old stuff! "Jungle Emperor," AKA: "Kimba The White Lion" is a great series that I have grown to love. I had already seen the epic movie "Jungle Emperor Leo" and the tv series "Leo the Lion." I knew I had to see the story of Leo/Kimba from the beginning-- when he was a cub. Each episode is like an adventure, even though there are some trippy moments(the movie has those too), and the characters are loveable.

What I love most about this anime is the little things. First, the animation is great, beautiful even. I found myself forgetting that this was a product of the 1960s! I've seen videos of the original Japanese openings and endings on YouTube. These songs were cut out of the English version, but they often play in instrumental form in the background. The animals were even humming the Japanese ending theme in one episode! It made me very happy. Yes, it warms my heart to hear the ORIGINAL soundtrack in a dubbed anime because I know that the original composers' work is not being wasted or scrapped. However, it gets even better! I have seen 26 episodes so far, but I have heard untranslated Japanese songs twice in two different episodes. This was the last thing I was expecting. The first song was a lullaby that Kimba's mother used to sing to him in the episode "Scrambled Eggs", and the second was an eerie night serenade sung by owls in "The Gigantic Grasshopper." The narrator said this was "owl language", but I knew better. This was very well done and I appreciate it because it is uncommon in Americanized anime. I'd like to know if anyone who watched "Kimba" in the 1960s remembers hearing something like that. I usually choose subs over dubs, but this is one dub I actually like. The voice actors do an okay job and the narrator's voice is soothing. Overall, it's a good quality anime that I will cherish forever. Thanks,Tezuka!
Read more
21 people found this helpful
Helpful
Comment Report abuse

Snintendog
4.0 out of 5 stars Great Product Flawed Case.[edit horrible case]
Reviewed in the United States on August 13, 2019
Verified Purchase
9 of the 10 disks were flawless no bad sectors on the dvds however the case was falling apat the disk clamps broken or almost broken rattling in the case. As testing i was them for bad sectors or defects i was glad none of the middle disks were not damaged at all when i got to disk 10 i see multiple scratches on looks like a decent gouge when testing i found at least 5 bad sectors and trying to play those areas in the disk would end the episode abruptly and send me to the dvd menu. Only happens in 2 episodes on the disk. I will be seeing if i can get anything done about the 10th disk. Other than that I have been fairly happy about the product. It would be great to have a dual audio English and Japanese set but this is fine.

Edit: replacement came in and wow more pics added this dvd case style failed horribly all the middle disks(2-8) were moving about the disk clips failed on all but the ends that are the traditional clips yeah not gonna even try to return this I'll stick with what I have now. testing the disks for read issues while writing this seems fine so far. But devs I implore you please rethink the disk holders for any future batches or products.
Read more

Capri Pappas
4.0 out of 5 stars Amazing series, but it needs better packaging!
Reviewed in the United States on January 1, 2019
Verified Purchase
All episodes are in good quality on each disc! No discs are scratched, however the case is of very poor quality. The plastic that holds each of the discs was all broken off when the DVD arrived to me, and the discs were all loose because of the loss of security. This is not due to the way it was mailed- it was secured nicely within a properly padded envelope and wrapped. The plastic bits were all broken off and the case came cracked in the corner because of the poor quality of the box set itself. Otherwise, everything else is just fine! If you want the entire Kimba anime on DVD, this is perfect. Just be aware that the plastic casing is not sturdy!
Read more
2 people found this helpful
Helpful
Comment Report abuse

I remember watching the series at a very young age in the late 70s, but did not remember anything specific about the episodes. My daughter and I are loving the show.
Read more
6 people found this helpful
Helpful
Comment Report abuse

LoveHarryPotter
5.0 out of 5 stars Kimba A Wonder
Reviewed in the United States on December 17, 2019
Verified Purchase
I watched episodes of Kimba when it first aired and some of them left me crying, joyful. Kimba has themes of kindness, redemption, honor, love, humor. It has moralistic themes without being in your face and sophistication I was not aware of until many years later. It is truly a wonder when I watch some of the episodes that I had missed and am amazed with the Native American beliefs in the wisdom of old. I was so glad I could purchase the entire series and watch them over and over. Kimba lives!
Read more
Helpful
Comment Report abuse

Japanimater
4.0 out of 5 stars Solid exterior case, but flimsy interior.
Reviewed in the United States on December 29, 2019
Verified Purchase
Despite the reviews lamenting about the condition of their's, I decided to give it a chance regardless.
I got mine solely for my Osamu Tezuka collection and not for children.
So product quality is the biggest factor in my reviews.
When I received this, the outer case was immaculate while the inside said otherwise.
Instead of having individual sleeve cases for each disc, the inside instead houses very flimsy leaflets whose peg hinges are prone to breaking as was the case with two of mine.
One of the offset teeth that holds the dvds in was also broken off, resulting in one disc to not seat.
However, the seller was not at fault for any of this as their packaging was better than any other's discs I've received from Amazon.
The fault lies with the manufacturer of the product for electing to use the cheapest possible case.
Fortunately, as an adult, I'm careful enough with defects that I can get around this small issue, but I would've rather paid an extra $5 for a case that was more mindful of collectors.
I guess they can't all match the quality of '00's Shout Factory collections.
Read more
Helpful
Comment Report abuse
See all reviews

Philip Marc
4.0 out of 5 stars Unlucky me. The DVD package came broken in pieces.
Reviewed in the United Kingdom on September 3, 2019
Verified Purchase
The show itself is phenomenal, after all, it's the true The Lion King story where it all began. The series is split to 10 discs in total but unfortunately for me the case came broken, I guess the distributor (Right Stuf) used one of the cheapest plastic cases available for ut., I honestly didn't expect it.
Read more
Report abuse

Catherine
5.0 out of 5 stars Five Stars
Reviewed in the United Kingdom on January 8, 2018
Verified Purchase
This is a grate dvd came early
Read more
Report abuse