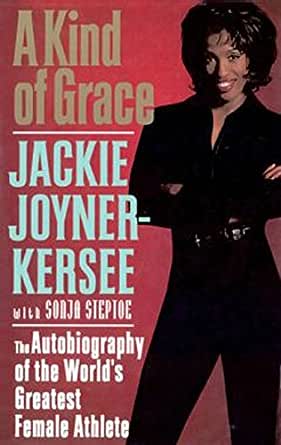 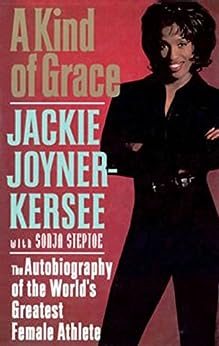 A Kind of Grace: The Autobiography of the World's Greatest Female Athlete Kindle Edition

The best sports stories are about overcoming overwhelming odds, confronting adversity, and--with a magical combination of skill, will, impossibly hard work, and determination--beating back the obstacles and triumphing with grace. It's no surprise, then, that Jackie Joyner-Kersee, multi-Olympic champion, All-American basketball star, and all-around inspiration and role model would include "Grace" in the title of her stirring autobiography; through her long careers, she has been both its beneficiary and its embodiment. Her journey from the poverty of East St. Louis to international fame and accomplishment is a marvelous tale of courage and conviction, which she movingly relates with passion, humor, honesty, and, of course, grace. --This text refers to an alternate kindle_edition edition.

Joyner-Kersee is a three-time Olympic gold medalist whose success in the multievent heptathlon deservedly earned her the designation as the world's best female athlete. She's also gained notoriety as a motivational speaker and product spokesperson. This standard-issue sports autobiography recounts her youth in impoverished East St. Louis, Illinois; her fledgling athletic endeavors under an outstanding high-school coach; her collegiate years at UCLA; and her 12-year career as a world-class heptathlete and long jumper. She recounts her courtship and marriage to her collegiate coach, Bob Kersee, and her struggle to recognize her asthma condition and make the adjustments that would permit her to continue competing. In between are descriptions of a few family tragedies and a ton of information regarding her triumphs at various track meets around the world. Anyone who has ever read a sports autobiography is familiar with the structure: it's only the details that differ from book to book. As far as it goes, this is a competent account of an admirable life. Joyner-Kersee's numerous fans and a big-dollar promotional push will create significant demand. Wes Lukowsky --This text refers to an alternate kindle_edition edition.

Three-time Olympic gold medalist Joyner-Kersee, with Sports Illustrated editor Steptoe, delivers an autobiography that outshines much of the dismal competition. Track star Joyner grew up in the impoverished city of East St. Louis, playing basketball and running track despite family hardships and community hostility to girls' athletics, and going to UCLA on an athletic scholarship (Joyner-Kersee makes good use of her UCLA history education; aspects of her life--her father's employment troubles and her own athletic opportunites, for instance--are skillfully placed in a sociopolitical context). Her parents divorced soon after she left home. Her mother died of a rare bacterial infection, and her death is wrenchingly described, as is the author's painful decision to take her mother off life-support. She is honest about her family--her problems with her father's hard drinking and bullying, and her complex relationship with her strong-willed husband and coach, Bobby Kersee. Her brother, Olympic gold medalist Al Joyner, and his wife, Florence (``Flo Jo'') Griffith Joyner, eventually stopped using Bobby as their coach; oddly, Joyner-Kersee leaves this break unexplained. Readers are reassured that everyone has moved on and gotten over it, but one can't help wanting to know what happened. Flo was widely quoted at the time as saying that Bobby had a ``cultlike'' coaching style. Did she really say that? We'll never know. Also frustrating is Joyner's tendency--shared by many other athletes--to present the most banal personal revelations as wisdom worth sharing with others: ``Today might look gloomy, but tomorrow will be bright'' is one such pearl. Despite some omissions and lapses into pseudo-inspiration, this is frank and lucid, and presents an intimate picture of a star athlete and her sport. (8 pages b&w photo insert, not seen) (Author tour) -- Copyright ©1997, Kirkus Associates, LP. All rights reserved. --This text refers to an alternate kindle_edition edition.

Jackie is known throughout the world as the best female athlete ever - the winner of six Olympic medals, three of them gold; the current world-record holder in the heptathlon (the women's version of the male decathlon); the one-time world-record holder in the long jump; and an All-America basketball player. She grew up in East St. Louis in a house "little more than wallpaper and sticks". Her parents were poor teenagers when they married. She made her first long-jump pit in her backyard from borrowed playground sand. One of her first performances went unrecorded because of the color of her skin. Yet Jackie not only had an innate ability to conquer speed and distance, but possessed an irrepressible personality and a deep, unshakable love of sport. As she harnessed her talents, Jackie began an amazing string of multisport successes. In the midst of it all, she would try to hold her family together after her mother's tragic early death (Mary was only 37), and face her own devastating grief. As she climbed the dizzying heights of international and Olympic competition, she would face relentless media attention that escalated when she married Bob Kersee, her enormously successful - and controversial - coach. As she reached her profession's peak, she would battle life-threatening asthma, unfounded accusations of drug-induced performance enhancement, and recurring injuries. Ultimately, she would unite her experience and determination to achieve the most meaningful victories of all - those that shape and build lives beyond the field. --This text refers to an alternate kindle_edition edition.

Currently with the Women's American Basketball League, Joyner-Kersey is best known as an Olympic gold medalist in the heptathlon. This is the story of her triumphs over poverty, family tragedy, and near-fatal asthma attacks.
Copyright 1997 Reed Business Information, Inc. --This text refers to an alternate kindle_edition edition.
Read more