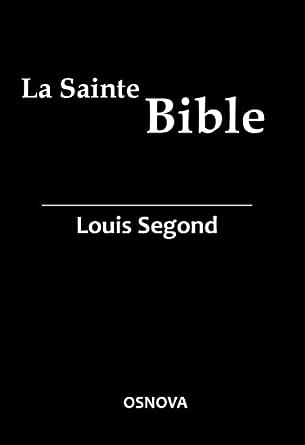 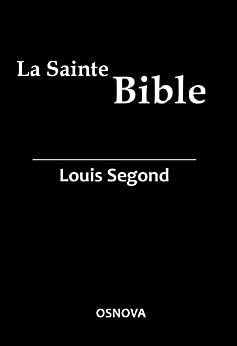 4.4 out of 5 stars
4.4 out of 5
155 global ratings
How are ratings calculated?
To calculate the overall star rating and percentage breakdown by star, we don’t use a simple average. Instead, our system considers things like how recent a review is and if the reviewer bought the item on Amazon. It also analyzes reviews to verify trustworthiness.
Top reviews

A reader
5.0 out of 5 stars J'adore ma Bible..
Reviewed in the United States on February 10, 2014
Verified Purchase
I am learning French...actually I am majoring in it. I love reading my French Bible! I am currently reading Matthew in the NIV Bible in English and Matthieu in this little French Bible. Reading the Bible in a different language can present stories read over and over in a fresh light or a changed perspective (just like reading different versions of the Bible can). For example, when reading about the Baptism of Jesus the French version quotes God (Dieu) as saying : " Celui-ci est mon Fils bien-aime...." which means this is my son who is well loved. In most English versions of the Bible I have read God is quoted as saying "This is my Son in whom I am well pleased" or something to that effect..reading the French version brought a new perspective to this story and tears to my eyes. Jesus was well-loved and yet he gave up all the love and adoration and safety and security of heaven to come to earth where he was treated as anything but well loved. Beautiful!
Read more
6 people found this helpful
Helpful
Comment Report abuse

Finnagain
4.0 out of 5 stars Complicated situation ended happily
Reviewed in the United States on June 5, 2011
Verified Purchase
I order several of these bibles every year for my wife. She gives them to her graduating French seniors. This year, we were only able to order a few from each vendor to get the five we needed. We got two black covered ones, and several brown covered ones even though the picture showed black for each order. We found out the black covers had been discontinue. We then tried to get 5 brown covers as we needed them all the same. The two brown ones had different cover designs as well. I was able to send back the ones that didn't work, and we finally got the last 3 right the day before my wife needed them as the next day was the final day of class. It ended ok, but there was a lot of returning and hoping the pictures would match the received product. Amazon was great though, and we got all our return credits, etc. The other vendor CACS also was really nice to work with.
Read more
One person found this helpful
Helpful
Comment Report abuse

Juan A. Ramos
3.0 out of 5 stars Caveat Emptor -- Buyer Beware!
Reviewed in the United States on February 15, 2013
Verified Purchase
A Bible is a very special purchase in my opinion & perhaps that is why I will review this purchase as both a Christian and from the standpoint of a regular person, which is why I bought it.

Some quick facts about my religious preferences so you know where I'm coming from:

I'm a born again Christian who attends an Independent Baptist Church. We are adamant about using the Textus Receptus translation. Our pastor even teaches members Greek so they can read the original New Testament scriptures for themselves.
I own a bilingual Reina-Valera 1865 Bible and a KJV 1611 Bible. I am fully fluent in both.
I don't speak "Spanish", I speak Castellano, i.e. Castilian. I live in Miami and most people here are from South America or the Caribbean and they bring their own slang from their respective countries. As such, they find it easier to read the newer Reina-Valera Bibles because the vocabulary doesn't pose as much of a problem.

This is why I bought the French Bible. I'm a fledgling Francophone and I wanted to practice my reading and writing skills outside of school and in addition to obtaining French music, I've bought this Bible. I did my research and found out the French version of the Textus Receptus is the Olivetan Bible. However, given its rarity and printing date, I'm certain that I would struggle to read it. So I bought this version instead.

* The Bible is very beautiful. La Sainte Bible in gold lettering on the outside. The leather feels authentic so even if it isn't, it's a very good imitation.

* Pages are beautiful, writing inside is nice and it even has a page holding tassel (black). It has maps of the ancient world in the back and the pages are not so thin that your ink bleeds through, but are light and strong enough to deal with some typical wear and tear.

* In addition, the Bible is so small that it fits in the standard pocket of a set of jeans; it's a huge reason I love this Bible!

* I don't believe the Bible should be sold at profit, so make sure you look around. If you're not in France or one of its colonies, then chances are that this is more of a novelty for you or (like me) a way to practice your language.

* It is a high quality Bible, so the price (in my opinion) is a bit high, but you can't really put a price on good quality craftsmanship.

* The font can be small, especially if the reader is older or needs reading glasses as is. I think the size was given so that it can be portable. I think a larger Bible is more befitting for an older generation and something like this akin a younger generation who doesn't have a problem reading smaller font.

* I have a real problem with the book's hesitation to say Jehovah, the Lord, God, etc... It usually says L'Eternel. Really? You can replace Jehovah, a Hebrew word and God's rightful name with The Eternal? That really, REALLY bothers me to no extent.

* There are "test verses" you can use with Bibles to see if it is authentic in its translation. I know there's several in the New Testament and one such verse is in Acts, I believe. It failed the test when I looked at it.

* I was in church this past Sunday and we were reading our Bibles and usually I carry my three Bibles with me. English (KJV), Bilingual (R-V & KJV), and this one. We were asked to look up a verse and when I went there with my French Bible, I noticed that pastor was not mistaken, there were like 3-5 verses COMPLETELY MISSING from my Bible that were in my KJV and the Bilingual Bible. The worst part? They were verses referring to Satan. It's kind of scary when a Bible erases text mentioning Satan.

* This is NOT a Catholic Bible. Those are based off the Latin Vulgate which are not part of the Hebrew collection. Gentiles use the Torah as our old testament and a lot of the books in the Old Testament that the Catholic Church uses are originally written in Latin or Greek and not Hebrew (as it should be for a Jewish religion) and in addition are not accepted by Judaism (the basis for our religion).

* As such, if you're a Catholic, you won't find the Biblical Apocrypha in this Bible. So if you're looking for access to these books, you may need to buy a supplement or another Bible entirely.

* This is apparently based off the originals, however these have been revised and while its legibility has increased (due to the modernization of the vocabulary for younger francophones), I suggest your try to get your hands on an older version (unrevised prior to 1910) or as mentioned above, the Olivetan. Not only will your French knowledge increase considerably, but you'll probably be reading a more accurate translation.

NessyBee
5.0 out of 5 stars Original Louis Segond!
Reviewed in the United States on July 28, 2018
Verified Purchase
This is the version that comes with chapter titles, and concordances.... love it!
Read more
One person found this helpful
Helpful
Comment Report abuse

David D. Bunch
5.0 out of 5 stars Awesome!
Reviewed in the United States on April 13, 2019
Verified Purchase
I couldn’t find my hard copy French Bible so I put this one on my iPhone.
Read more
Helpful
Comment Report abuse

Cgj091
5.0 out of 5 stars Great Bible!
Reviewed in the United States on August 7, 2013
Verified Purchase
Bought this item as agift for my mom. Translations are perfect. my mom had this bible along time ago but wasnt sure if this was the one. Its a gread buy and easy to carry around in her purse. She takes it everywhere with her and to church. I would recommend this bible over the bigger bulky hard cover ones.
Read more
One person found this helpful
Helpful
Comment Report abuse

graci
5.0 out of 5 stars For a Christian in France seeking to share the gospel
Reviewed in the United Kingdom on August 30, 2018
Verified Purchase
Now that I live in France I find the need to have a French version on the Bible to hand as well as an English one. This Saint Bible is easy to access and find the chapter and verse I want
Read more
Report abuse

Frank O'Phile
3.0 out of 5 stars Don't use an early Kindle for this
Reviewed in the United Kingdom on October 3, 2015
Verified Purchase
On my iPad it is great. But on my primitive Kindle it seems impossible to access a random chapter. Of course, the book itself is beyond reproach.
Read more
Report abuse

Lectrice
5.0 out of 5 stars Excellent French bible
Reviewed in the United Kingdom on November 29, 2013
Verified Purchase
It is exactly what I wanted. Compact easy reading and good complementary cross references. I can highly recommendit to any French person who wishes to read the Bible in Fr.ench
Read more
One person found this helpful
Report abuse

St. John Perry
5.0 out of 5 stars Five Stars
Reviewed in the United Kingdom on October 24, 2015
Verified Purchase
Just what I required; instant access to both texts.
Read more
Report abuse