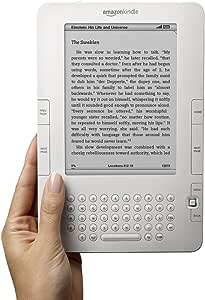 4.5 out of 5 stars
4.5 out of 5
18,271 customer ratings
How does Amazon calculate star ratings?
Amazon calculates a product’s star ratings based on a machine learned model instead of a raw data average. The model takes into account factors including the age of a rating, whether the ratings are from verified purchasers, and factors that establish reviewer trustworthiness.

S.P. Mulligan
5.0 out of 5 stars Goodbye, old friend. You never failed me. Not once.
Reviewed in the United States on June 13, 2015
Verified Purchase
I bought my Kindle in 2009. I had saved up, working as a university ticket writer. Every time an errant driver would shout his head off at me, or I had to walk the lots in the pouring rain, or use chemical heaters in every pocket of my jacket just to stay warm, I thought about the Kindle I was pinching pennies for.

When it came in the mail it was in a soft brown cardboard box with pleasant white packaging on the inside. It took me all of five minutes to figure out how it worked. And I have since used my Kindle, this exact model, without interruption for almost six years now. In the world of consumer technology, that is an eternity.

The battery life - provided you turned the Internet off - was phenomenal. My Kindle could charge for 30 minutes and run for three weeks of nightly readings before needing another charge. I've never seen such a hard-working and efficient little device. I started to personalize it, the way crazy people do pets.

I took my Kindle to Aruba, and used the 3G there to write emails to my family when I couldn't find a decent internet cafe. I have brought it to on countless road trips, plane flights, and my Kindle was with me in Paris when the Charlie Hebdo shootings occurred. And more than all of this, my Kindle was beside me every night at home, through multiple moves, sparing me the great burden of every bibliophile: five boxes of books at least in a moving truck, every time, weighing hundreds of pounds. That's a lot of work. By contrast, my Kindle slips into my girlfriend's purse.

Well, Amazon, I know no one is going to read this review. And I know it probably won't help anyone, because who is really in the market for a six year old e-reader? But I did want to write this. I had to write this. Because after so many years, it's time to move on. My poor Kindle is starting to have trouble waking up in the morning. Sometimes the top bar disappears, and sometimes my Kindle forgets how many books it has. It's time to put my Kindle down for the last time, and pick up a new one.

eponton
5.0 out of 5 stars a dear family member, she will be missed
Reviewed in the United States on January 21, 2016
Verified Purchase
An Ode to A Dear Friend
My dear kindle has powered down for the last time. Now it makes a final journey to that Great Amazon Warehouse in Kentucky.
My kindle was always there for me, always charging properly and never forgetting my page. She joined me for lunch most days and supported me through midnight heartburn and early morning bus rides. We traveled small slices of the world together; visiting Alaska, Hawaii, Louisiana, the Caribbean, Washington DC and the airports of Dallas and Denver.
We had six years with each other and enjoyed nearly two thousand books on rainy evenings and sunny afternoons.
But alas, her old age could not compete with 24 pounds of exuberant toddler. She fought hard at the end, rallying her buttons with out of the box youth on good days. Regretfully, she never recovered from the paralyzing effects of being grabbed, thrown and stomped. The mobility of our youngest family member signaled her death knells.
I will miss you, Kindle, though my pain will be lessened when Amazon credits me for donating your poor, broken body to science and refurbishment. My hope for you now is to teach others and maybe share a library with a new friend (if you believe in that sort of thing).
A new kindle will soon join my daily quiet moments, but know that the touchscreen, keyboard-less frame, lighter weight and haptic page press will never dim the memories of the books we've shared. So long friend, so long.
Read more
22 people found this helpful
Helpful
Comment Report abuse

Stephanie
5.0 out of 5 stars The greatest kindle ever
Reviewed in the United States on May 31, 2018
Verified Purchase
Feb 21 2009 I bought what has been my most cherished item. It has traveled the world with me and lived in 5 different states. When it first came out it was this amazing new technology. It held over 300 books, and I could download anywhere! I have downloaded books on trains, planes and even a ship. I downloaded books in over 13 countries. The screen was perfect and just everything about it was fantastic.
Sadly, today may 31, 2018 it moved on to electronic heaven. Rest In Peace kindle, you made my life more enriched.
Read more
6 people found this helpful
Helpful
Comment Report abuse
See all reviews from the United States
Customer Discussions