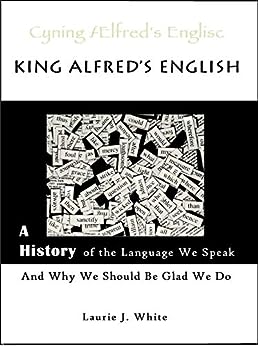 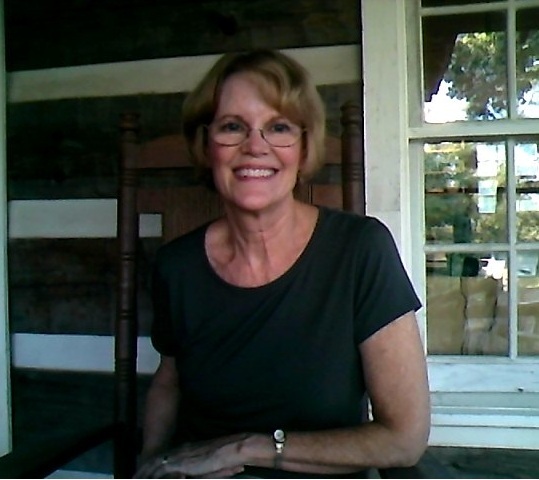 King Alfred's English: A History of the Language We Speak and Why We Should Be Glad We Do Kindle Edition

"In my 26 years of homeschooling, I have rarely found a book like yours; full of godly, interesting information and presented in such an engaging way. Going through your book with my children is something we still talk about together. I just wanted you to know that I am recommending this book to all of my readers as a MUST for advanced (high school) language arts." --Sherry Hayes  largefamilymothering.com

Author Laurie J. White's book King Alfred's English is enlightening, entertaining, and easy to read about the origin and history of the English language, from the Latin influence of the Romans in Britain, through Anglo-Saxon Old English,  Middle English after the Norman Invasion, Early Modern English of Queen Elizabeth I and King James, to Contemporary English.  King Alfred's English is both accurate and pleasurable reading.
--Dr. Wes Davis, Professor of English, Dalton State College
--This text refers to the paperback edition.

Laurie White is a history teacher, literacy tutor, and homeschooling mom of three children (now grown) . She writes both fiction and non-fiction books and materials for grades 3-12. For more information visit her website: TheShorterWord.com --This text refers to the paperback edition.

DB52
5.0 out of 5 stars Wooing to words and wisdom: Glorifying God with linguistics and language history
Reviewed in the United States on May 27, 2018
Verified Purchase
This has become one of my favorite nonfiction books of all time. As an English teacher in a classical program, this has proven to be one of my most valued resources for wooing my reluctant students (and parents) and inviting them to befriend and come to love all things connected to language. Latin can be a hard sell in a utilitarian society. Mrs. White's breezy and charming voice draws you in while simultaneously and thoroughly laying a foundation for studying linguistics and a history that connects us all. There is a lot of joy and encouragement to be found in this light and lovely little tome.
Read more
4 people found this helpful
Helpful
Report abuse

Sharon
5.0 out of 5 stars Enjoyable. Informative. Entertaining.
Reviewed in the United States on September 2, 2014
Verified Purchase
Have you ever laughed out loud when reading a history book? If you have, then you’ve been reading the delightful KING ALFRED’S ENGLISH: A History of the Language We Speak and Why We Should Be Glad We Do by Laurie J. White. White, in her casual style, traces the history of the English language from the days of Julius Caesar to the present. Here’s her summation of the people groups who had the most influence on the English language, giving it a larger vocabulary than any other language on earth: “When English arrived in England, it was a lean, trim, meaty stock of Anglo-Saxon words. Then over the centuries it feasted on Latin and Norse, gorged on French, and chased down the whole meal with a fizzy swig of Greek and a fresh twist of Latin during the Renaissance.”

In KING ALFRED’S ENGLISH, you’ll get an entertaining history of England and Western Europe, an intriguing record of the development of the Bible, and a greater appreciation of the language that brings you the word “bodacious,” named for a bold Celtic queen. Where else can you learn the funny reason capital letters are called “upper case,” why cow meat is called “beef,” which man was burned at the stake for translating the Bible into English, why we say “Let there be light” instead of “Let there be illumination,” and why Mr. Crapper’s name ended up on so many toilets? And, yes, Shakespeare’s name is embedded in the King James Version of the Bible, but is this on purpose?

KING ALFRED’S ENGLISH is suitable for homeschools, students desiring to know more about the invasions that pummeled the English language into its current shape, and adults who have a linguistic bent and a love of language. Links to helpful videos, articles, images, and literature related to each chapter can be found at White’s website www.theshorterword.com.
Read more
12 people found this helpful
Helpful
Report abuse

Doug Erlandson
5.0 out of 5 stars Fun and easy to read
Reviewed in the United States on December 12, 2013
Verified Purchase
While "King Alfred's English" is not a book of serious scholarship (nor is this its purpose) it is a fun (and at times funny) and easy to read introduction to a topic that is often overlooked in the examination of our heritage––namely, the history of the English language. As a couple of the critical reviews have pointed out, the author may have painted some things with a broad stroke, and in those areas with which I was already familiar (such as the work of Tyndale) I'm sure she did; nevertheless, what she says is mostly accurate as far as it goes. Although written for a high-school level audience, the book contains quite a bit of information from which even an adult with a doctorate can benefit. (For the record, I'm a recently-retired philosophy teacher with a doctorate from Johns Hopkins.) The reason I picked up the book was to get an overview in an area (viz., the development of the English language) that I had never really studied. This is precisely what this book provided. It has served its purpose in making me want to investigate the topic in more detail.

Regarding the overtly Christian stance of the author, this book was written by a Christian primarily for a Christian audience and was published by a Christian publisher. For those who are offended by this approach, I'm sure that there are other books on the topic that they can read in its place.
Read more
17 people found this helpful
Helpful
Report abuse

Jeff
5.0 out of 5 stars For People Who Love Words
Reviewed in the United States on January 26, 2021
Verified Purchase
This is one of my all time favourite books. It is well written, goes at a good pace, covers a lot of information in an interesting and engaging way. If you love words, I think you will love this book. It is a fascinating overview of the influences on the English language.
Read more
Helpful
Report abuse

Terri Moore
5.0 out of 5 stars read and love! I loved this book
Reviewed in the United States on November 24, 2015
Verified Purchase
I wanted to share a book that I have found, read and love!

I loved this book!
The author has done a wonderful job of making history come alive in an engaging story of the English language. I read it cover to cover and learned so much. Best of all there is a website ( the shorter word) with lots links to supplement the book and it is all free! One section that is titled Not To Be Missed on the student pages has links to interesting short video's and readings to go along with each chapter, making it very easy to use.
I know that it is part of one of HOD's high school history curriculum packages. I can't recommend this book enough!
Read more
3 people found this helpful
Helpful
Report abuse

DanaW
5.0 out of 5 stars Excellent book and perfect for homeschoolers!
Reviewed in the United States on September 6, 2012
Verified Purchase
A homeschooling mom's dream, King Alfred's English: A History of the Language We Speak and Why We Should Be Glad We Do includes European and Bible history, etymology, literature and geography - all in one captivating book! Not only does this excellent read neatly incorporate several subjects in one readable volume, it does so with humor and clarity.

I absolutely loved this book!

We are adding it to our curricula and we highly recommend it for middle schoolers on up. (Elementary students would probably enjoy listening to it as a read aloud, as well.) View a more detailed review on my blog.

In the interests of full disclosure, I received a free copy of this book for review purposes,although my opinions are my own. Incidentally, I keep lending my hard copy out, so have since purchased a digital copy. Very highly recommended.
Read more
4 people found this helpful
Helpful
Report abuse

Mr. Man
5.0 out of 5 stars Interesting and fun
Reviewed in the United States on January 31, 2013
Verified Purchase
I thought this book was informative, interesting and easy to read. It is both very basic and quite complete which is not easy to do. It covers the topic of linguistics in a way that a non-linguist can enjoy.
Read more
6 people found this helpful
Helpful
Report abuse

W
4.0 out of 5 stars Very educational
Reviewed in the United Kingdom on January 19, 2017
Verified Purchase
I agree that there are one or two minor spelling mistakes in this book, but then there are also US as opposed to UK spellings, which I knew would be the case when I bought the book. Overall though it is very educational and I have learned a lot from it. There aren't many history nor English language books available in the UK that aren't afraid to discuss the Christian heritage of both our nation and the language that we speak.
Read more
Report abuse

CaPe
5.0 out of 5 stars Excellent book! Not as big as I'd expected but ...
Reviewed in the United Kingdom on February 7, 2015
Verified Purchase
Excellent book! Not as big as I'd expected but packed with information I was previously unaware of. I'd recommend to anyone who is curious about the origins of our english language and how it evolved and where it's heading. (I've even forgiven the fact that the author is American). It's definitely given me food for thought, so much so that I've looked into learning Alfred's English. Maybe I'll come back and let you know how that has gone in an update.
Read more
Report abuse

Amazon Customer
5.0 out of 5 stars Enjoyable, entertaining and educational all in one!
Reviewed in the United Kingdom on May 11, 2017
Verified Purchase
The author takes us on a wonderful historical journey of the English language, with many "Well I never knew that!" moments. It is written with knowledge and respectful humour. Thoroughly enjoyed it.
Read more
Report abuse

Charles Jefferson
2.0 out of 5 stars See me after class
Reviewed in the United Kingdom on October 15, 2015
Verified Purchase
When you start reading a book about language, is it not reasonable to think that the authors would be able to spell? I am only 10% of the way through but already I have these: Pyranees and decent. One is a range of mountains and the other is a descent. Who proof read the book ? Stevie Wonder?
Read more
Report abuse

susan55
3.0 out of 5 stars Interesting
Reviewed in Australia on June 9, 2014
Verified Purchase
I enjoyed reading where and how the words originated, having studied Latin at school the roman input was fairly clear to me but the input from the Saxons, Angles, Celts, Vikings, everybody who invaded anywhere in the UK was not only interesting but done in a manner which entertained as well.
Read more
Report abuse
See all reviews
Back to top
Get to Know Us
Make Money with Us
Amazon Payment Products
Let Us Help You
EnglishChoose a language for shopping. United StatesChoose a country/region for shopping.
© 1996-2021, Amazon.com, Inc. or its affiliates