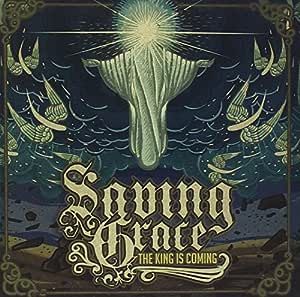 The King Is Coming

Since 2005 Saving Grace s ever-growing fan base and dedication to touring has earned them the reputation of the most successful spirit-filled hardcore act downunder. Saving Grace was born in a small coastal beach town in New Zealand, a sleeping beginning to a band that would become a metallic hardcore powerhouse, playing music in the 90s hardcore style of Earth Crisis and Arkangel mixed with the classic metal bands like Slayer and Sepultura. Saving Grace have toured the US, New Zealand, Australia, and Mexico and there is no end in site for touring in support of this new album.

HeavyMetalSushi
5.0 out of 5 stars Absolutely <3 This Band!
Reviewed in the United States on January 11, 2013
Verified Purchase
I fell in love with this band after having first heard some stuff off of their debut album  Behind Enemy Lines  on Harvest Earth Records. I don't know if Harvest Earth Records later shut down or what, but a physical copy of Behind Enemy Lines is hard to find anymore, at least for any less than $20-$30, though you can easily get it on digital download of it on Amazon for $8.99.

Anyway, ever since then I've absolutely loved Saving Grace and have not missed a release by them yet.
Unbreakable (Dig)  is also a fantastic album, and was their debut album after having signed on with Facedown Records, who is or at least was affiliated with Harvest Earth Records. Then, later on, they released their next metal masterpiece that is King Is Coming.

King Is Coming is an absolutely brutal death metal ride full of lyrics containing both warning of impending judgment and more importantly, a message of hope. My kinda dudes, my kinda metal! \m/ If you love modern metal & death metal, than friends...I very highly recommend checking out this album, or the band's entire works for that matter! They are absolutely fantastic! Quality face melting material! Love it!
Read more
Helpful
Comment Report abuse

Corey J. Watson
5.0 out of 5 stars Very heavy, and to-the-point.
Reviewed in the United States on July 26, 2012
Verified Purchase
Unlike some heavier Christian bands, these guys don't beat around the bush at all with metaphors or vague lyrics. They come right out and say what is on their minds. Some might call them preachy, but I think that's their intention. This music rocks so hard though that you don't feel like you're being preached at. I did giggle a bit when I heard the line from "Law Abiding Citizen" before Kefirah played. I found it funny because this very Christian band had to censor out an F-bomb in order to sneak that soundbite in there. "I'm gonna pull the whole thing down. I'm gonna bring the whole f****ing' diseased, corrupt temple down on your head. It's gonna be biblical." is the movie line in question, but the F-bomb is just gone. Why not use a different clip? I know it's a minor detail to get caught up with, especially on such a great album, but I just found it funny.
Read more
Helpful
Comment Report abuse

M. hale
5.0 out of 5 stars Chugga chugga
Reviewed in the United States on November 25, 2011
Verified Purchase
I don't like hardcore music that much, I'm more of a metal guy. This release has plenty of old school riffs that remind me of the good old thrash days wich is why I love this release. I you love metal riffs you will love this album. I love unbreakable and this continues on that and continues to get better.
Read more
Helpful
Comment Report abuse

Kyle Lavender
5.0 out of 5 stars Awesome Christian Death Metal
Reviewed in the United States on January 16, 2014
Verified Purchase
Awesome sound and powerful messages, I am a definite Saving Grace fan. I hope they keep up the amazing work and keep pumping out high quality music like this.
Read more
Helpful
Comment Report abuse