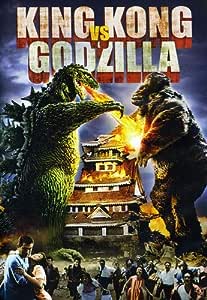 The two mightiest monsters of all time battle in the thrilling adventure classic, King Kong vs. Godzilla. When an underhanded pharmaceutical company goes to a remote tropical island to steal King Kong for advertising purposes, they get more than they bargained for when the gigantic ape attacks an unsuspecting village and an enormous octopus. Meanwhile, far below the sea, a submarine crew unleashes reptilian terror when they melt a block of ice and release the ferocious Godzilla from his icy lair. When both destructive monsters descend on Tokyo, it's a fight that holds the future of mankind in the balance in this knock-out film that was the first theatrical release to bring its larger-than-life contenders to the big screen in glorious color.

4.6 out of 5 stars
4.6 out of 5
1,322 global ratings
How are ratings calculated?
To calculate the overall star rating and percentage breakdown by star, we don’t use a simple average. Instead, our system considers things like how recent a review is and if the reviewer bought the item on Amazon. It also analyzes reviews to verify trustworthiness.

Bare Bones
4.0 out of 5 stars THE BARE BONES REVIEW
Reviewed in the United States on May 7, 2019
Verified Purchase
This product arrived quickly Via Amazon prime.

The picture quality of this Blu-ray is decent. Given the age and nature of the film, this is obviously not going to be demo material. Fans of the movie will notice only slight visual improvements over the dvd, although the film will maintain a clearer picture on large screens thanks to the technical aspects of the Blu-ray format. There were no noticeable issues in audio quality.

With the remake of this film coming out next year in 2020, it's a good time to revisit this old gem. Yes, the plot is cheesy. And yes, it's guys in monster suits, the space ship is being held up by a string, and the tanks are obviously all models . But for those of us who have known and loved the film for a very long time, this Blu-ray edition is still the superior version available on the market today.

I encountered no issues playing this Blu-ray on my 2017 model LG Blu-ray player. No update was needed to the machine.

HB
3.0 out of 5 stars I almost happy with this american version.
Reviewed in the United States on April 16, 2018
Verified Purchase
This is the third film in the Godzila series and and featured Kingkong as a big guest for Toho’s 30th anniversary establishment.

I(Japanese) want to see what American version is. The overall storyline is the same(some unimportant pieces are cut for inserting American newly-shot footage) and the original Akira Ifukube score is replaced an American version. Eve so,I am almost happy with the American version.

Timothy D. Gallagher
4.0 out of 5 stars There will never be an American release of the Japanese version of this film
Reviewed in the United States on April 14, 2014
Verified Purchase
I've seen this movie so many times I could practically spout all the dialogue verbatim. I loved this movie as a kid, and continue to enjoy it well into my old age; I'm just glad to see it finally in the crisp BluRay format.

I am addressing a complaint that I've seen in many other reviews, and one that I have myself: the lack of the Japanese (and, arguably, superior) version of this film. We've gotten spoiled by Sony and other distributors who've put both versions of the Godzilla films on their BluRay releases. The problem with doing that with this film, simply put, is a rights issue. Universal has the exclusive rights to the American version, Toho has exclusive rights to the Japanese version. As far as I understand it, this agreement is perpetual. The agreement also provides that neither studio can sell their version in the other studio's territory/market.

Therefore, fellow fans, the unfortunate truth is you will never see the Japanese version of "King Kong vs Godzilla" for sale in the USA (at least legitimately). You'll have to purchase the Japanese version directly from Japan, and then play it in an all region/region free BluRay player. That's a familiar situation for the longtime Godzilla fan, myself included, who haunted science fiction or comic conventions in order to purchase Japanese VHS tapes, and eventually DVDs, of Godzilla films long before they were ever made available through American companies. You'll have to decide for yourself if that's worth doing in this case.
Read more
94 people found this helpful
Helpful
Report abuse

joel wing
TOP 500 REVIEWER
4.0 out of 5 stars Just as fun to watch today as when I saw it as a kid
Reviewed in the United States on November 7, 2019
Verified Purchase
I actually saw King Kong vs Godzilla as a Sunday matinee double feature when I was a kid. Godzilla was a mainstay on weekend TV when I was growing up, so when they had one of the films in an actual movie theater I couldn’t pass it up. The movie is still good after all of these years.

King Kong vs Godzilla was the third in the franchise, directed by Ishiro Honda who did the original Godzilla film along with several others plus other Japanese kaiju releases such as Rodan, Mothra, and War of the Gargantuas. This however is the American version of the film, which was re-edited and added an American TV news caster Eric Carter played by Michael Keith who worked for the United Nations as the narrator. The movie itself actually started with an American writer Willis O’Brien who gave the idea to John Beck who eventually sold it to Toho Studios.

The story revolves around a submarine reviving Godzilla who immediately attacks Japan. On the other hand, a Japanese businessman wants his own monster and funds an expedition to a remote island in search of one. First a giant octopus shows up, and eventually they find Kong who they drug and take back to Japan. There he awakens, escapes and comes into battle with Godzilla.

The movie was a departure from the first two Godzilla movies. The originals played upon the threat Godzilla posed to Japan and the horrors that ensued. This one had plenty of comedy. The Japanese businessman for example that thinks he owns Kong is a buffoon. The two Japanese explorers that find Kong also provides jokes. On the other hand, some sequences are not supposed to be funny but they are like when they play tribal music to put Kong to sleep in Tokyo.

The two monsters are a contrast in beasts. Kong is considered a smart and thinking animal, while Godzilla is supposedly simple minded. In a takeoff of the U.S. original, Kong takes a Japanese woman from a tram and then climbs atop the Japanese parliament building, the National Diet with her in his hand.

Basically this movie set the standard for all that would follow. Godzilla would show up. The humans would try to stop him, but then another monster would arrive and there would be a series of giant battles. This started with the previous film Godzilla Rides Again, but the style and the extensive use of miniatures used in King Kong vs Godzilla could easily be transferred to any of the following movies all the way up to the current ones.
C
Read more
2 people found this helpful
Helpful
Report abuse
See all reviews

B FAN
3.0 out of 5 stars ANOTHER MOVIE ONLY DISC
Reviewed in the United Kingdom on May 17, 2014
Verified Purchase
This classic movie now comes to blu-ray is it worth an upgrade if you have the dvd well yes and no.If you have a projector and need a nice in focus picture due to your larger picture the answer is yes but if you are watching on tv i would say no.Now about the disc itself the sound is very good as is the picture the col is nice and rich the trouble with this disc is the movie is shown in the wrong format what you get here is a movie that was shot in full scope but on the disc we get a widescreen format which makes it just a little better than pan and scan.The second thing is there is no extras on this disc at all not even a trailer which is a great shame as i have it on 16mm and its a classic.As i have said many times we are not getting the best of blu-ray with these movie only discs but we seem to be getting more and more of them from the so called big companys like UNIVERSAL etc yet a small company like ARROW are showing the big boys how it should be done.One last thing UNIVERSAL have also brought out the follow up on blu-ray KING KONG ESCAPES which also is a movie only disc with good col and sound but also in the wrong format and no extras come on UNIVERSAL you can do better than this
Read more
7 people found this helpful
Report abuse

A. Gillespie
5.0 out of 5 stars Great Laughs
Reviewed in Canada on July 30, 2013
Verified Purchase
This movie has to be a classic. We laughed so much we had to pause to catch our breath. We watched this on tv about 3 weeks ago, great to have our own copy now. Fantastic addition to a growing collection.
Read more
One person found this helpful
Report abuse