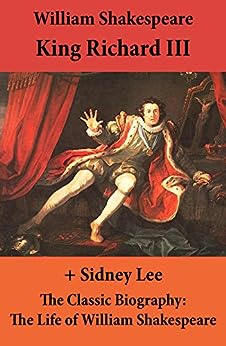 King Richard III is a new title in the Cambridge School Shakespeare series. --This text refers to an alternate kindle_edition edition.

King Richard III is a new title in the Cambridge School Shakespeare series. It considers the play as theatre and the text as script, enabling pupils to inhabit the imaginative world of the play in an accessible, meaningful and creative way. --This text refers to an alternate kindle_edition edition.

William Shakespeare, also known as “Bard of Avon”, is regarded as one of the greatest writer in the English language and the finest dramatist of the world. He was a successful English poet, Playwright, and actor. He is often called England’s National Poet. His works have been translated into every major language of the world, and are performed the most as compared to any other playwright. His works, along with some collaborations, consist of about 38 plays, 154 sonnets, two long narrative poems, and few other verses, of which the authorship of some is unconfirmed. Shakespeare’s private life is much speculated about, as too few records of his private life have survived. The known works of Shakespeare were produced between 1589 and 1613. In the early phase as a playwright, Shakespeare mostly produced comedies and histories, and these works are considered as one of the best in these genres. Afterwards, he wrote tragedies until about 1608, which include Hamlet, Macbeth, King Lear, and Othello. These works are also one of the finest in English language, and literature. In his last phase, he wrote tragicomedies, also known as romances, and collaborated with other playwrights. --This text refers to an alternate kindle_edition edition.
Read more

4.2 out of 5 stars
4.2 out of 5
25 global ratings
How are ratings calculated?
To calculate the overall star rating and percentage breakdown by star, we don’t use a simple average. Instead, our system considers things like how recent a review is and if the reviewer bought the item on Amazon. It also analyzes reviews to verify trustworthiness.

R J Havicon
5.0 out of 5 stars Villainous
Reviewed in the United States on April 1, 2019
Verified Purchase
One of Shakesspeare's best plays and my personal favorite. It make not be fact as it happened but the Hard played the audience superbly in this work.
Read more
Helpful
Report abuse

Andrea Engle
1.0 out of 5 stars Not annotated
Reviewed in the United States on October 9, 2016
Verified Purchase
Don't buy this kindle if you see that it annotated ... its not.
Read more
One person found this helpful
Helpful
Report abuse

Aaron G
1.0 out of 5 stars Horrible formatting
Reviewed in the United States on February 13, 2011
Verified Purchase
In my opinion, spend a little more and get a better version of this play. I downloaded it and the formatting is so bad that it is completely unreadable. "The winter of our discontent"? Try "The format of our discontent."
Read more
Helpful
Report abuse

B. Chandler
HALL OF FAMETOP 1000 REVIEWERVINE VOICE
5.0 out of 5 stars FIRST MURDERER Remember our reward, when the deed’s done
Reviewed in the United States on November 9, 2019
SECOND MURDER Zounds, he dies: I had forgot the reward.

There is no good place to start on the play “The Tragedy of Richard III” by Shakespeare without having spoilers. Yet people that know history or at least Shakespeare’s version 1592 or 1593, or familiar with Virgil’s “Historia Angliae” will want this book for a good copy of the details of the play.

This is the GLOUCESTER: “Now is the winterer of our discontent” play.

I have several hard copies but the kindle adds portability and text-to-speak.

I have a hunch we have not seen the last of Richard III. No telling what can be dug up now days.

The Daughter of Time by Josephine Tey

5.0 out of 5 stars FIRST MURDERER Remember our reward, when the deed’s done
By B. Chandler on November 9, 2019
SECOND MURDER Zounds, he dies: I had forgot the reward.

There is no good place to start on the play “The Tragedy of Richard III” by Shakespeare without having spoilers. Yet people that know history or at least Shakespeare’s version 1592 or 1593, or familiar with Virgil’s “Historia Angliae” will want this book for a good copy of the details of the play.

This is the GLOUCESTER: “Now is the winterer of our discontent” play.

I have several hard copies but the kindle adds portability and text-to-speak.

I have a hunch we have not seen the last of Richard III. No telling what can be dug up now days.

Stephen John Vogel
5.0 out of 5 stars Hard to Find, Wonderful to Hear
Reviewed in the United States on February 19, 2014
It's a pity that this recording of Shakespeare's Richard III hasn't, as of now, been transferred to CD or to some other more easily obtainable format.I bought my copy of the 4 vinyl records that make up this set many years ago at a used record store. For some reason, I never got around to listening to the whole play until last night, but finally having done so, I'm so glad I did, and even glader I didn't try to resell it earlier. This one's a keeper.

Made in the mid-1960's for the Shakespeare Recording Society/Caedmon by the inestimable record producer Howard Sackler, who also serves as director here, this recording boasts some of Britain's brightest actors, either well-established, like Dame Peggy Ashcroft, who plays Queen Margaret, or rising stars like Robert Stevens in the title role and Glenda Jackson as Lady Anne. All perform their parts with polish and intensity, and the fact that they have to rely solely on their voices to convey their characters seems to inspire them to a greater richness of characterization. In addition to those actors I've just mentioned, Jeremy Brett (best known today for his portrayal of Sherlock Holmes on a British TV series) makes a moving Clarence (his death scene is spine-tingling), and Ian Holm is a rousing Richmond, giving a vibrant oration to his troops before the Battle of Bosworth.

The sound effects are few but well chosen, and the scenes flow from one to the next without confusion, Shakespeare having provided verbal indications of where the scenes begin and end through his magnificent dialogue. My only qualm with this recording is the decision, either Ashcroft's or Sackler's, to have Margaret speak with a slight "foreign accent." True she was French-born, so probably would have had a non-British sound to her voice, but here she sounds more German than French, which is slightly comical at times as she sounds a little like Marlene Dietrich. Notwithstanding the accent, Ashcroft gives a stunning performance and her first scene, in which she predicts the downfall of her enemies at court, is appropriately blood-curdling. Stevens, however, gives the outstanding performance, as well he should in one of Shakespeare's most intriguing and fascinating roles. Special kudos to that "rising star" of the era, Glenda Jackson for an spell-binding interpretation of the unfortunate lady Anne, whom Richard so memorably woos and wins over the body of the dead King Henry, just after Richard has killed the king's son, Anne's husband. We follow the verbal sparring, like a game of chess between two masters, to its unexpected yet logical conclusion and are left in awe of the subtle progression from one emotion to the next. This is Shakespeare near or at top form, in this early play which marked his emergence as a major figure in Elizabethan theater.

Again, I can't urge anyone enough to somehow obtain this recoding if they want a superb rendering of a great work of dramatic literature. It may actually be easier to appreciate Shakespeare's verbal genius when it is presented in this aural format, without any visual distractions. Though I don't plan to part with my copy of this recording, I'm glad that others will, so that those who want a feast for their ears as well as their minds can have one if only they can find a set of these recordings available.
Read more
2 people found this helpful
Helpful
Report abuse
See all reviews

Terry Byrne
5.0 out of 5 stars A splendid edition
Reviewed in the United Kingdom on July 29, 2013
Verified Purchase
This edition of Richard III (with notes by Richard Adams) is probably the finest around. Despite being edited 30 years it has all the hallmarks of meticulous scholarship. Adams evidently has a background in History. He brings this elegantly to the fore throughout the play, enhancing our understanding not only of the text but of the Historical Background. A brand new edition of this needs to be published. Much thanks, Mr Adams, it was a labour of love reading your every sentence!
Read more
Report abuse

claudie vignault
5.0 out of 5 stars Five Stars
Reviewed in Canada on October 25, 2016
Verified Purchase
Extraordinaire. Kenneth Branagh est merveilleux!
Read more
Report abuse
Translate review to English
See all reviews
Back to top
Get to Know Us
Make Money with Us
Amazon Payment Products
Let Us Help You
EnglishChoose a language for shopping. United StatesChoose a country/region for shopping.
© 1996-2021, Amazon.com, Inc. or its affiliates