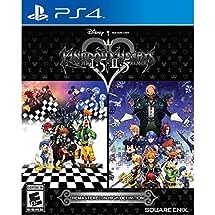 Buy this product as Renewed and save $3.05 off the current New price.

4.7 out of 5 stars
4.7 out of 5
1,238 global ratings
How are ratings calculated?
To calculate the overall star rating and percentage breakdown by star, we don’t use a simple average. Instead, our system considers things like how recent a review is and if the reviewer bought the item on Amazon. It also analyzes reviews to verify trustworthiness.

Vincent
HALL OF FAMETOP 50 REVIEWERVINE VOICE
4.0 out of 5 stars Got it memorized?
Reviewed in the United States on April 2, 2017
Platform: PlayStation 4Edition: 1.5 + 2.5 RemixVerified Purchase
Essentially Kingdom Hearts 1.5 and 2.5 Remix on PS3 on one disc but with faster loading times and slightly better polish on graphics (more on 1.5 than 2.5).

This is the definitive version of 4 games plus 2 movies in one location, but the gameplay is also was transferred over. Nice to see the evolution of the series as you play through all the games, but if feels somewhat dated especially with Kingdom Hearts (1) Final Mix. Not sure if they don't have the resources, or kept it in for the purists (probably the former more than the later) but if you're used to playing modern RPG style 3D beat em' ups (like FFXV) then it takes a while to get adjusted.

For those PSN trophy hunters; there are over 150 trophies to collect. Unlike the PS3 remixes; the 2 movies: Kingdom Hearts 358/2 Days and Kingdom Hearts Re: Coded does not have trophies attached to them

If you owned/played all games in this collection, there's no real added content except faster loading screens and a slight spit shine on graphics.
Value of this collection is based on:
-how much of a fan you are
-if you want all Kingdom Hearts games on one console (PS4)
-want to re-experience the story again before KH3
- if you're a PSN trophy hunter
- if you're like one of my friends never played Kingdom Hearts before and only had Xbox, Xbox 360 when the original games released or
-Any combination of the above

Dana
5.0 out of 5 stars Great collection for fans new and old.
Reviewed in the United States on April 25, 2018
Platform: PlayStation 4Edition: 1.5 + 2.5 RemixVerified Purchase
I had never played any of these games before buying this collection. At the time they originally came out, the idea of a Disney RPG seemed absurd, and I dismissed the series as something I would never be interested in. Well, in TYOOL 2018, I can happily report that I was dead wrong. Yes, the plot can get a little convoluted at times, but the sense of fun and optimism in the series is reminiscent of classic JRPGs and Disney films.

The story follows a boy named Sora, who leaves his island home on a quest to save his friends and stop creatures called the Heartless. Armed with a mysterious weapon known as the Keyblade, and joined by Donald Duck and Goofy, Sora journeys to the worlds of classic Disney movies in his quest.

This collection contains 4 games from the series, and remade cinematics from 2 Nintendo DS games. The original Kingdom Hearts is a fun, if flawed introduction to the series, which occasionally stumbles from unclear objectives and frustrating (albeit infrequent) platforming and flying missions. Chain of Memories is a remake of a Gameboy Advance title, that adds card elements to the combat system. I found this one to be the weakest game on the disc, as I don't think the combat system here is ever very fun. You'll want to catch up on the story of this one anyway, as it's an important bridge from Kingdom Hearts to KHII.

Kingdom Hearts II is without a doubt the standout of the disc, an improvement of the first game in every way. While just the main quest is very accessible, you'll need to master the combat system to tackle the post-game content. Kingdom Hearts: Birth by Sleep is an enhanced port of a PSP game. It features three protagonists, whose stories you'll play through one at a time, and takes place before KH and KHII. It introduces a Command Deck system, where special attacks and magic can be placed into a loadout, and have a recharge time between uses instead of a depletible resource like mana. This works much better than the Card Deck mechanic from Chain of Memories, and it ties with the original Kingdom Hearts as my second favorite game on the disc.

Finally, Kingdom Hearts Re:Coded and 358/2 Days (yes that's really what it's called) appear in the form of cutscene collections, and unfortunately this makes their stories very hard to follow. 358/2 Days mainly exists to fill in some of the gaps between KH and KHII, and provide background on some of the characters of those games. Re:Coded is a largely inconsequential side story, and really only notable for some bits at the end that set up story elements for future games.

This is a great collection for existing fans, and a perfect chance for new fans to get caught up before Kingdom Hearts III comes out.
Read more
11 people found this helpful
Helpful
Comment Report abuse

AAuld
1.0 out of 5 stars Code is invalid
Reviewed in the United States on November 20, 2018
Platform: PS4 Digital CodeEdition: 1.5 + 2.5 RemixVerified Purchase
Just got off phone with Sony, do not purchase codes from Amazon for this product, there is a known issue that Amazon is selling cancelled or invalid codes to this.

The product is available for purchase and download on the Playstation Store.
Read more
11 people found this helpful
Helpful
Comment Report abuse

Kyle
4.0 out of 5 stars D A R K N E S S
Reviewed in the United States on May 20, 2018
Platform: PlayStation 4Edition: 1.5 + 2.5 RemixVerified Purchase
All of the games look fantastic in HD at an unwavering 60 FPS. Load times are almost nonexistent compared to the other versions available, and drive forms are almost instantaneous so you don't have to pause buffer like in other versions. The games are listed in the order their meant to be played in top to bottom, and you get neat little bonuses for beating each game like unique ps4 themes. A few bugs showed up during my playtime, some were minor while another erased 5 hours worth of grinding. Most of these have been fixed but there's probably more out there. My personal list for the best games on this disk go as follows:

KH 2>KH>KH re:CoM>KH BBS
Their all a good time regardless and you should play them in order to understand the story, especially if you are preparing for KH3.
Read more
4 people found this helpful
Helpful
Comment Report abuse

sarah
5.0 out of 5 stars Neccesity for any die hard kingdom hearts fan, amazing deal.
Reviewed in the United States on June 25, 2017
Platform: PlayStation 4Edition: 1.5 + 2.5 RemixVerified Purchase
This has been my favorite series for as long as I can remember. I remember wanting to play all the games so badly but I couldn't because of how many consoles it was spread across. Id spend hours watching cut scenes and reading about the games i couldn't play. I modified mu old ps2 with a flip top cover so i could play kh2fm. I bought the collectors edition of 1.5+2.5 for the ps3 which was a dream come true and then bought this one and have had no regrets. It's so convenient and I love how much I've added to my growing collection.
This paired with 2.8 gives you the ultimate package to prep yourself for kh3.
The only downside is 358/2 days is only cinematic, no gameplay. It would have been am excellent game to make playable but I can hardly complain. Nearly the whole series on 1 disk, that's 4 games and 2 movies for the price of 1 game. Amazing deal.
Read more
6 people found this helpful
Helpful
Comment Report abuse
See all reviews

Ross
5.0 out of 5 stars Best remastered collection of any series yet
Reviewed in Canada on August 17, 2019
Platform: PlayStation 4Edition: 1.5 + 2.5 RemixVerified Purchase
The fact that Square Ennix put all the Previous Kingdom Hearts into a song le package is spectacular. I have never seen this many great titles from one series brought together. The only gripe fans might have is some games (DS Ones) are just curscene videos. But that is due to the origin of the games and that gameplay wouldn't transfer well you get all the story and still more than enough gameplay.
Read more
Report abuse

Page 1 of 1 Start overPage 1 of 1
This shopping feature will continue to load items when the Enter key is pressed. In order to navigate out of this carousel please use your heading shortcut key to navigate to the next or previous heading.
Back
Next
Pages with related products. See and discover other items: crash bandicoot, xbox one games for kids, ps 4 games for kids, square one, final fantasy iv video games, Best heart model for kids