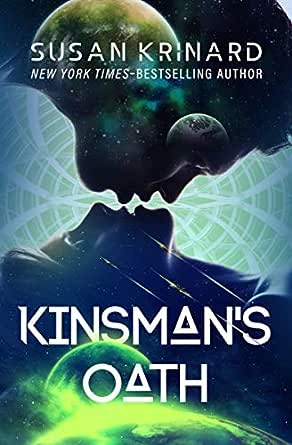 You've subscribed to The Kinsman Series! We will preorder your items within 24 hours of when they become available. When new books are released, we'll charge your default payment method for the lowest price available during the pre-order period.
Update your device or payment method, cancel individual pre-orders or your subscription at
Your Memberships & Subscriptions
There was an error. We were unable to process your subscription due to an error. Please refresh and try again. 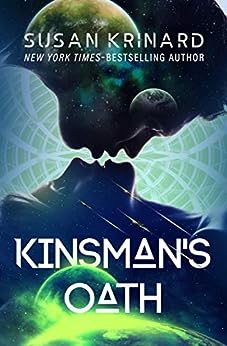 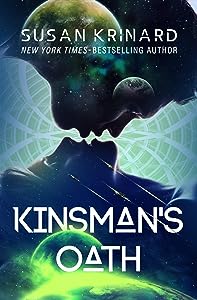 Susan Krinard is a bestselling author of futuristic and paranormal romance novels. She has won a RITA Award for Best Contemporary Fantasy; Affaire de Coeur’s award for Best Up-and-Coming Author of Futuristic, Fantasy, and Paranormal Romance; and the PRISM Award for Best Dark Paranormal and Best Short Fiction for her novella “Kinsman” in the bestselling anthology Out of This World. Her romance Lord of the Beasts hit #33 on the New York Times bestseller list. Most recently, Krinard has published the Nightsiders paranormal romance series with Harlequin Nocturne and the Midgard urban fantasy series with Tor Books.

Two telepaths from very different backgrounds find love in Krinard's elaborate futuristic romance, which revisits the complex world she created in "Kinsman," her short story contribution to the Out of this World (2001) anthology. Those who are familiar with this futuristic landscape may enjoy this imaginative tale, but others will likely feel one step behind from the first page. In the opening scene, young Ronan VelKalevi is captured by the beast-like Shaauri, a race reviled by humankind. As a grown man, Ronan finally escapes from the Shaauri with the help of Cynara D'Accorso, captain of the spaceship Pegasus. Ronan and Cynara are both misfits-he's distinctly human but he's been taught by the Shaauri to despise his own kind, and she's a strong woman who hails from a planet where women are second-class citizens. Cynara and Ronan prod each other's minds and connect in an erotic way, but it soon becomes apparent that Ronan has been programmed to kill a prominent human leader. The affair between Ronan and Cynara, while compelling, is too often overshadowed by the politics of Krinard's world. Overpopulated and overstuffed with exposition, this book isn't likely to achieve the popularity of the author's Wolf romances (To Catch a Wolf, etc.).
Copyright © Reed Business Information, a division of Reed Elsevier Inc. All rights reserved. --This text refers to an out of print or unavailable edition of this title.

Captain Cynara D'Accorso, fearless leader of the spaceship Pegasus, comes to a place where women are barely considered people and are forced to hide their faces behind veils. But through a strange twist of fate, Cynara has inherited a title and command of her own vessel. She offers sanctuary to Ronan, a handsome but badly scarred human who's fleeing the dreaded shaauri, ferocious cat-like warriors who abducted him as a child. Cynara's crew doesn't necessarily agree with their captain's decision: they worry that Ronan might be one of the traitorous Kinsmen. As Cynara develops feelings for the mysterious refugee, evidence begins to surface that her crew's suspicions might be correct. Krinard, known for her imaginative paranormal romances, including The Forest Lord (2002) and To Catch a Wolf [BKL S 15 03], has penned a fantastic futuristic romance complete with political intrigue and out-of-this-world adventure. Filled with intricate details of other worlds, species, and cultures, this is sure to appeal to a crossover audience, especially fans of such authors as J. D. Robb and Maggie Shayne. Shelley Mosley
Copyright © American Library Association. All rights reserved --This text refers to an out of print or unavailable edition of this title.
Read more

Aimee
5.0 out of 5 stars Susan Krinard has just won herself a new fan!
Reviewed in the United States on October 11, 2004
Wow! I am blown away! Excellent book! Susan Krinard has created a vivid and compelling futuristic world with fascinating and belivably complex societies. Each planet -- even the ones that belong to the same unifiying government -- has its own unique personality, flavor, and society. They all feel organic and real, as well as being original and unique. The alien culture of the Shaauri is fascinating too, as well as feeling convincingly alien. Krinard does not fall prey to the same trap many science fiction writers find themselves in -- the Shaauri are original and new and truly alien; they aren't simply a human culture reworked with new names. Really amazing world-building here.

The characters too were complex individuals, with a psychological complexity and depth that made them all a joy to read about. These were real, three-dimensional people, in all their contradictory human (or alien, as the case may be) glory.

The plot was also fabulous, a complicated blend of action, intrigue, and politics that kept me turning the pages furiously! Kinsman's Oath was complex, thought-provoking, and deep, dealing with issues of self-identity and the way one's sense of self is influenced by one's culture, one's memory, and one's family -- and the way all of these things can be manipulated when you live in a world peopled with telepaths.

All in all, this was a marvelous book! A great read! I'm going to look for Krinard's other novels; she has just gained a new fan!

BlueCapeSky
3.0 out of 5 stars Confusing plot
Reviewed in the United States on June 22, 2004
The problem with having TWO telepaths falling in love with each other is that, obviously, they can read each other's minds. In this book, the plot curve balls don't come externally, they come from the telepathic hero and heroine themselves. So how do you have plot curve balls with telephaths? You have them hide themselves. So for the first half of the book, the hero seems like a good guy. Then the second half of the book, you learn his hidden agenda, which also totally altered his personality and made me not like him at all. So I spent the first half of the book getting to like the guy, then in the second half that guy wasn't there anymore, but someone else with the same name and face.
The first half is spent introducing the reader to the characters and universe. The second half is where everything gets very confusing and tangled up, as the two telepathic leads subvert their personalities and plots again and again. Because they are telepathic, the two leads are like giant onions, with each layer, complete with personality, plot, and thoughts, hiding the thoughts and goals of the layer underneath. After the author forced me to go through at least 4 layers, I was completely bewildered by who believed what and who each person truly was. One minute, the heroine or hero was doing something for a particular reason. Then you learn they were lying about it all the time, they really meant to do this. Then you learn that that was just an act, they really want to do this. And so on. By the end of the book, I felt that I didn't know either character at all, they were so full of subterfuge.
I hope her next novel has better plot devices, preferably more creativity in exploring worlds, flora and fauna, rather than this confusing personality-crisis business.
Read more
4 people found this helpful
Helpful
Comment Report abuse

Amazon Customer
5.0 out of 5 stars wonderful OUT OF THIS WORLD science fiction romance
Reviewed in the United States on April 29, 2004
Two decades ago, war between humanity and the Shaauri broke out. Most of the Kinsmen, humans with telepathic abilities, supported the Shaauri against their own kind. Abductions were not uncommon and a young Ronan velKalevi was taken as a lad by the Shaauri during the early days of the conflict
Now Ronan tries to escape from his captivity. Blockade runner Captain Cynara D'Accorso of the Pegasus sees Ronan flee a Shaauri warship, but though her better judgment says to stay out of this potentially dangerous scenario, she rescues him. When she realizes he is telepathic she becomes concerned because many of those with that skill joined the enemy. Though extremely attracted to him, she wonders if he is a mole sent out to stop activities like hers. Ronan, unused to human contact finds himself in love with his rescuer, but is not sure how to prove he wants to be on her side.
Returning to the "Kinsman" universe that she first described in an OUT OF THIS WORLD novella, Susan Krinard furbishes science fiction romance readers with a wonderful tale of a future in space marred by armed conflict. The delightful story line hooks readers of both genres with its descriptive insight into a galaxy under siege while also providing two wonderful characters wondering whether they should be loving partners or disillusioned antagonists. Fans of the author will appreciate this fine futuristic adventure tale though there is not a werewolf within a zillion light-years of this novel.
Harriet Klausner
Read more
5 people found this helpful
Helpful
Comment Report abuse

A reader
4.0 out of 5 stars An Intelligent Escape Novel
Reviewed in the United States on August 7, 2004
A hallmark of Susan Krinard's writing is a significantly deeper level of psychological exploration than the typical escape novelist offers. Kinsman's Oath provides an abundance of psychological exploration. The role of a telepath, seen particularly in the two lead characters, stems from more than the desire for mental connection that many people seek. Three psychological issues that Krinard explores are self-identity, manipulation of memory, and cultural conditioning. Some issues are explored more skillfully than others. In addition to the psychological issues mentioned, many additional themes are entwined throughout the story. Being classified as a romance novel, love is one of the additional themes.

If you're looking to escape into a simple, rather superficial story that doesn't require much thought, the choices are bountiful, and Kinsman's Oath might not be what you're looking for. If you enjoy reading high quality fiction / literature, yet wish to escape every so often without sacrificing intelligence, then you may find Kinsman's Oath to be an enjoyable reading experience.
Read more
5 people found this helpful
Helpful
Comment Report abuse
See all reviews

Amazon Customer
5.0 out of 5 stars Interesting reading
Reviewed in the United Kingdom on May 13, 2020
Verified Purchase
Bed time reading. The story reminded me of Star Trek meets the gifted with Star Wars. Enjoyed it.
Read more
Report abuse
See all reviews