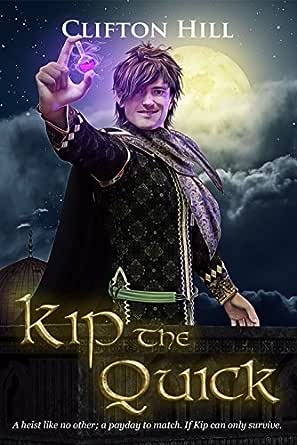 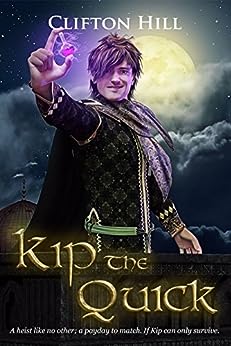 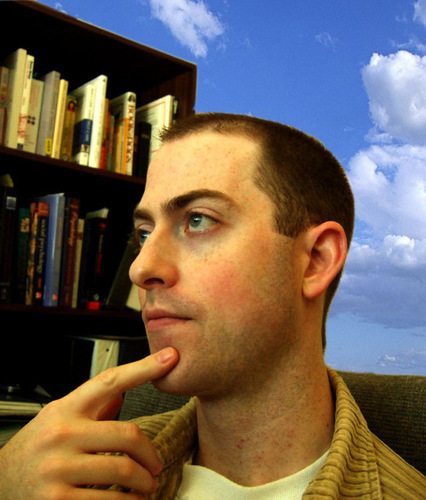 EARLY REVIEWERS ARE SAYING:
"Compelling"
"a sand-buckling adventure""
"this is edge of your seat stuff. it justkeeps going, from one adventure to the next. I can't wait to see what happensnext."

Clifton Hill discovered robots in the Fourth Grade when his grandmother handed him a book by Isaac Asimov. Science fiction absorbed him for the next couple years until a little piece called the Belgariad came along, bringing magic and an incredible new world. Bouncing throughout speculative fiction, Clifton became absorbed by video games, comics and has a degree in Computer Animation. He has dabbled in various art forms, sought to design video games, co-created a web comic, chased after tornadoes, and fights moss whenever he can. After years of neglect, he picked up a story idea buried in a layer of dust, blew it off and has never looked back. Clifton lives in the Pacific Northwest with his wife and two children, working in mortgage, his head thoroughly lodged in the clouds. --This text refers to the paperback edition.

Tander is a city set in a ravine amid a barren desert. Kip, a young thief, has been sneaking about Tander for most of his fifteen years when he receives a note from one of the local crime lords offering to pay him more than he has ever received for anything he has ever done if he will steal a vial of the mysterious magical Essence.

Kip, who has been saving up for years to get out of Tander, finally sees his chance to realize this dream, so he accepts the challenge. He crafts a plan worthy of the highest-profile international criminal in our own world and is progressing handsomely until some bouts of freakish weather begin to interfere.

Nevertheless, he finally manages to acquire the Essence. But then there’s the whole other problem of getting it to his buyer.
Read more
One person found this helpful
Helpful
Comment Report abuse

Larry Teeney
4.0 out of 5 stars Parkour Adventure
Reviewed in the United States on December 30, 2016
Verified Purchase
Kip the Quick is a fast-paced romp through a Pseudo-Middle Eastern desert realm that will deliver the goods for those young readers craving action and adventure. It is aimed at I think the YA audience so I wasn't totally the target demographic, but I found it enjoyable (think of Indiana Jones for the action).

I once stated that the book's setting and protagonist reminded me of Assassin's Creed without the assassinations. Kip is a parkour expert of a thief. He vaults around rooftops and through alleyways in search of the ultimate treasure, and the perfect heist.

The story is well-written and Hill clearly cares about his characters which is nice. The book isn't without faults; mainly an emotional connection to the characters. I didn't feel invested and I thought that the stakes weren't all that high. Also, for being set in a Persian or Arab-influenced setting I found the names of characters and places a little generic (i.e. Ron the Con, Kip). But, those are minor gripes, and it is a fast read.
Read more
One person found this helpful
Helpful
Comment Report abuse

Steve R. Yeager
5.0 out of 5 stars Kip the Quick
Reviewed in the United States on May 28, 2016
Verified Purchase
I was an early reader of this book and received a copy in exchange for an honest review. I did purchase a copy of my own later.
Kip the Quick is the story of a young thief who steals his way into trouble, which he quickly learns to steal his way out of. It is a first person fantasy tale of action and adventure and was a fun and quick read with a character that I didn’t at first like, but he grew on me and, by the end, I was rooting for him to win. There are some scenes that stretch credibility, but that’s the joy of reading fantasy. After all, it’s a story to escape into, not real life.

I read this book originally in two sittings, so things moved quickly enough to keep me involved, and I was satisfied with the ending.
If you enjoy first person YA, with a swashbuckling, deft-fingered hero, this book should fit you well.
Read more
Helpful
Comment Report abuse

Scott Stafford
5.0 out of 5 stars great read for any one who likes fantasy, and entertainment.
Reviewed in the United States on June 10, 2017
Verified Purchase
wow, what a fun story. I really enjoyed the characters, the pace, and the story. I can honestly say this is a wonderful find. I recommend this to any one who is looking for an entertaining book for a nice escape, and captivating read. 5 stars!!!!!!!
Read more
One person found this helpful
Helpful
Comment Report abuse

Susan Medicis
5.0 out of 5 stars See My Review On Sci-Clops.com
Reviewed in the United States on September 14, 2016
Verified Purchase
Kip the Quick is an awesome short fantasy-adventure! Great imagery, fast-paced, looking forward to Kip's next adventure. Full review at [...]
Read more
One person found this helpful
Helpful
Comment Report abuse

Susan
3.0 out of 5 stars Didn't hate it
Reviewed in the United States on December 19, 2019
Kip is a thief and a pretty good one. He takes a huge job and most of the story is him planning this job. You meet quite a few characters along the way. Kip thinks he is very alone through the story and is quite a bit selfish, though I’m not really sure he even realizes it.

I think the ending was well done. Kip definitely looks back at all that has happened and opens his eyes. He sees things differently. It is also left with a bit of a cliffhanger, which leaves it open for the next story to begin.

Overall, it was good, but left me wishing for more out of the characters.
Read more
Helpful
Comment Report abuse

Jeff Lippincott
3.0 out of 5 stars Too much “I this” and “I that” in this short story for me to like it.
Reviewed in the United States on November 8, 2018
Just Ok. Thus 3 stars! This short story is all “I this” and “I that.” It's written as though the author is the main character. The first few chapters failed to draw me into the story. They also failed to paint a good picture of what the story was about and where it was headed.

Squeezed into 157 pages of text were 32 chapters, most of which were very short. I think the author knew the character development was weak, and that he failed to paint a good picture of the world he was trying to create. Otherwise he would not have included his glossary, list of places, and list of characters at the end.

As I read this short story what came to mind was a play I participated in when I was in elementary school. It was a short rendition of the Charles Dickens story called Oliver Twist. Dickens used a lot of words and pages to tell his story of a street kid thief. The author in the current book did not. 3 stars!
Read more
Helpful
Comment Report abuse
See all reviews