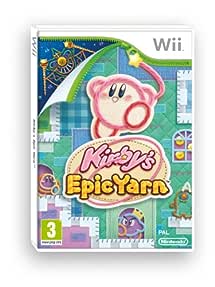 Go Behind the Seams With Kirby! Kirby has been turned into yarn, and now he must weave through a hand-crafted world of stitching, zippers, and eye-popping textures unlike anything you've ever seen! Experience this unique Kirby platformer that is as delightful to see as it is fun to play! It's Kirby's World, We Just Live In it. Help Kirby as he unravels yarn bosses, unbuttons night into day, unzips buildings to reveal secret passageways, and slips behind hidden seams in a visually stunning landscape that is sure to dazzle players of all ages. Use Kirby's new abilities to manipulate the environment in this one-of-a-kind adventure! Unspool A World of Pure Imagination. Transform Kirby into trains, tanks, submarines, monster trucks, flying saucers, and more as he battles an array of woven enemies through levels bursting with creativity and imagination! Play with Kirby's newest friend, Prince Fluff! Battle alongside Prince Fluff and help him recover his kingdom! A simultaneous two-player, co-op mode will have players of all skill levels enjoying this one-of-a-kind experience!

Kirby's Epic Yarn is a 2D platformer for Wii that blends classic Kirby gameplay with new abilities, functionality and more. Kirby's first console platform game since the Nintendo 64 days, Kirby's Epic Yarn introduces an amazing new look based on animated yarn and a world of cloth and textiles. The creative approach is woven directly into the gameplay and allows the ever-morphing Kirby to take on a variety of new forms. It's a one-of-a-kind platformer that lets players explore high and low for hidden objects, experience fun adventure and even join with a second player in a co-op play mode.

Kirby's tendency for gobbling up items has set off another chain events. This time it has to do with an odd looking tomato-like object. Looking utterly delicious, down it goes. The problem is that it belongs to an evil wizard who reacts by sending Kirby to another dimension where everything, and everyone, even Kirby, are made of yarn. But that is a decision that the Wizard may yet regret, as Kirby joins forces with new friends in the strange land to unravel the plot of the wizard.

A Kirby gameplay experience like none before it.
View larger.

Like all Kirby games, Epic Yarn is a side-scrolling platformer, but gameplay is different in this adventure. In its gameworld, everything is made of yarn or fabric, including Kirby and the game levels themselves. Kirby is of course pursued by the minions of the evil wizard that sent him to the gameworld, but in this world Kirby does not swallow enemies to dispatch them. Instead he uses a whip of yarn to stun them. Curled into the shape of a yarn ball, he can then toss them at additional enemies and/or obstacles. Kirby's movements are different as well. He no longer floats the way he did in previous games. Instead he glides in parachute form, or takes the shape of vehicles such as a train, a top, a truck, a UFO, a tank and others that are appropriate for the challenge at hand. Throughout the gameplay area are hidden beads, that if maintained, maximize points. There are also hidden levels that are revealed as Kirby pulls on zippers and loose threads encountered. Standard level progression is achieved via a series of patches that players receive on completion of levels. These are added to a tapestry by Kirby which results in the next level being revealed. The game also features two-player co-op through the entire game in which the second player takes on the role of an additional character from the game and works together with Kirby to access new areas.

Page 1 of 1 Start overPage 1 of 1
This shopping feature will continue to load items when the Enter key is pressed. In order to navigate out of this carousel please use your heading shortcut key to navigate to the next or previous heading.
Back
Next
Pages with related products. See and discover other items: gifts for gift exchange, epic game, xbox one gifts, arcade games for kids, games for wii u under 20 dollars, Best boards for babies