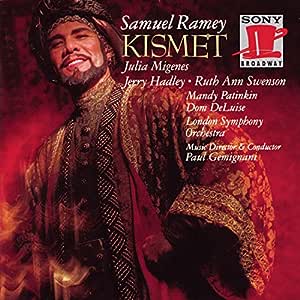 Listening to this high-powered 1991 studio recording may forever spoil your enjoyment of the mostly tepid voices in the 1955 movie version of Kismet. Producer Thomas Shepard and music director Paul Gemignani enlisted some of opera's best voices to record this quite operatic musical, called "a musical Arabian night" and based on the themes of 19th-century Russian composer Alexander Borodin. Samuel Ramey is a bit turgid as the Poet. Luckily, Julia Migenes as Lalume is sensational and Jerry Hadley as the Caliph and Ruth Ann Swenson as Marsinah are simply glorious. Less successful are a hysterical Mandy Patinkin (in only one number) and a braying Dom Deluise (in a vocally undemanding role as the Wazir). Thankfully, the singers are at their best in the most challenging numbers, which include some all-time favorites: "Stranger in Paradise," "Not Since Nineveh," "Baubles, Bangles, and Beads," "And This Is My Beloved," and "Night of My Nights." This CD clocks in at a generous 68 minutes, but you'll probably find yourself listening to the "hits" over and over. The same cast also recorded Man of La Mancha with Placido Domingo. Full lyrics are included. --David Horiuchi

Russell J. Sanders
5.0 out of 5 stars Gorgeous!
Reviewed in the United States on August 15, 2015
Verified Purchase
This is an absolutely beautiful rendering of a gorgeous score. All too often--especially in the 80s and 90s--when an "all-star" rendering of a show was recorded, there would be some big name thrown in to sell records who truly doesn't portray the character assigned. In this one, I figured it would be Dom DeLuise, but he embodies the Wazir and contributes to the veracity of the interpretation. This is a wonderful recording! A warning: it comes in a double CD jewel case, so it appears that there is a CD missing. But the entire score is on one CD. Apparently, they used the double case to accommodate the rather thick book of lyrics.
Read more
2 people found this helpful
Helpful
Comment Report abuse

GregFNC
4.0 out of 5 stars Brilliant Sounding Recording
Reviewed in the United States on October 16, 2013
Verified Purchase
I have to agree with most of what has been written about this recording. However what everyone has failed to comment on is the sound which is both exciting and spectacular. And note this recording was made with a full symphony orchestra and chorus which makes a huge difference and were things that the invaluable recordings with Alfred Drake did not benefit from. I would buy this recording for the orchestra and sound alone.

While everyone needs at least one of the Alfred Drake recordings, this one is excellent and I highly recommend it. Most opera singers sound too 'operatic' when singing lighter material, but with the exception of Jerry Hadley, that's not the case here. Samuel Ramey sings and acts the role marvelously and Johnson and Swenson are excellent too. Hadley sounds great but too operatic for my taste.

J. T Waldmann
3.0 out of 5 stars MOMENTS SO BEAUTIFUL THAT WILL BRING TEARS TO YOUR EYES, BUT . . . . .
Reviewed in the United States on July 29, 2006
Verified Purchase
This KISMET has its moments. Some of them will take your breath away, and others will make you cringe. Overall, it's a recording that you might want to include in your library, primarily because of the marvelous singing by Jerry Hadley.

"Stranger in Paradise," sung by Hadley & Ruth Ann Swenson, is so ravishingly beautiful that it will bring tears to your eyes. That moment alone is worth the price of this album. Additionally, Hadley's "Night of My Nights" will absolutely give you goose bumps. In fact, I doubt if there has ever been a better sung "Caliph" anywhere. Listen to the way he pops off high A-flats & B-flats. Wow!

Ruth Ann Swenson is a lovely "Marsinah," although she doesn't seem as comfortable in the role as either Doretta Morrow on the 1953 Original Cast recording or Lee Venora in the 1965 Lincoln Center Revival. Julia Migenes (Have you seen her CARMEN?) is in great voice as "Lalume," playing her more subtly than either Joan Diener or Anne Jeffreys. I prefer broad. Dom DeLuise is a wretched "Wazir" and sticks out like a sore thumb among the trained voices. But most wretched of all is Mandy Patinkin singing "Zubbediya," usually sung by the "Widow Yussef." What was producer Thomas Z. Shepard smoking?

Of course, the overall success of any KISMET depends on the actor/singer who play "Hajj, the Poet," and let's face it, Alfred Drake owns the part. Samuel Ramey has the voice and the looks but, unfortunately, limited acting ability. He sings all the right notes, but appears more concerned with producing a gorgeous tone than with interpreting the song. His best moment is "The Olive Tree."

Paul Gemignani leads the London Symphony Orchestra and the combined forces of the Ambrosian Singers and the Concert Chorale of New York, and how welcome they are in lieu of today's synthesized pit bands and scaled-back corps of singer/dancers. However, at times the shear mass of musicians tends to bog down the show.

In spite of its flaws, this is still a valuable recording and deserves a place in your library along with the 1953 Broadway Cast and the Lincoln Center recording - if Sony/BMG ever gets around to remastering it.

Good Stuff
5.0 out of 5 stars OH MY!
Reviewed in the United States on March 7, 2005
Verified Purchase
This is magic. Don't miss Jerry Hadley here. This remarkable artist is simply phenomenal, as is just about everyone else. Yes, Mr. Patinkin is actually a bit of a Potemkin here! But isn't he always? I think his popularity is a New York thing. But he comes and goes quickly, allowing us to revel in the voluptuousness of the rest of the cast and the dazzling music they have to sing.

G. Price
5.0 out of 5 stars A Kismet worth a Kiss
Reviewed in the United States on September 3, 2007
Verified Purchase
This is a beautiful rendering of this musical. Borodin's music was done a good justice by Robert Wright's arranging and inter-connecting of the tunes. The soloists and ensemble had a fine feel for the ebb and flow of the musical line, and the Ramey's, Svenson, and Hadley's singing was ravishing and Dom DeLouise was quite characterful as well. I bought the Original Cast recording at the same time I bought this. (I did so partly because I just love the music, but also because I wanted to have Richard Kiley's renderings. I first became acquainted and came to admire Richard Kiley's voice through The Man of La Mancha recordings, so I wanted to see what he did in this music. I highly recommend BOTH recordings and would not be able to pick one over the other - YOU must do that if you choose to purchase only one and I do not purpose to say anything here that would sway you one way or the other.
Read more
Helpful
Comment Report abuse
See all reviews

Helen
5.0 out of 5 stars Five Stars
Reviewed in the United Kingdom on June 20, 2018
Verified Purchase
I simple love the music - taken of course from Borodin original.
Read more
Report abuse
See all reviews