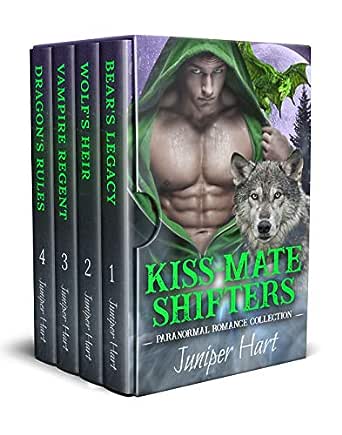 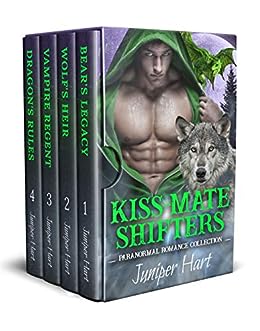 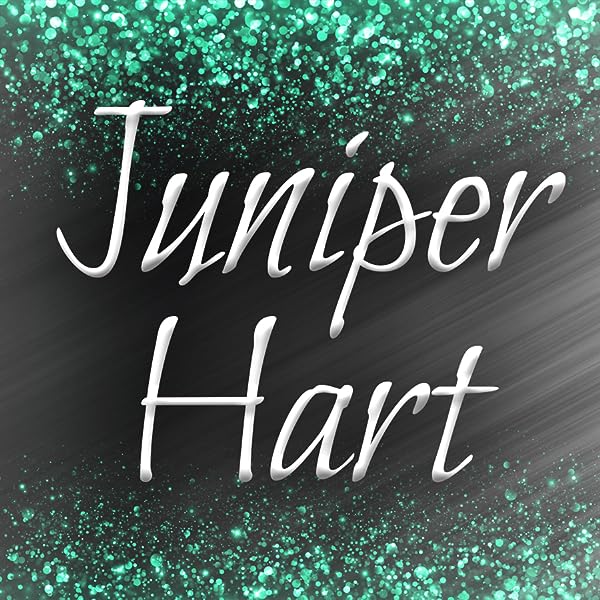 4.3 out of 5 stars
4.3 out of 5
35 customer ratings
How does Amazon calculate star ratings?
Amazon calculates a product’s star ratings based on a machine learned model instead of a raw data average. The model takes into account factors including the age of a rating, whether the ratings are from verified purchasers, and factors that establish reviewer trustworthiness.
Top Reviews

Kindle Customer
5.0 out of 5 stars Kiss-Mate Shifters Collection
Reviewed in the United States on May 19, 2020
Verified Purchase
I really enjoyed this collection of books. I enjoy reading from all kinds of authors. I like reading of the different takes on the paranormal of each author. While some stick to mainly wolves or bears, others will forge out farther. This is the first time I read of demons and seen that they can be like others and find love and mates. I have only ever read of demons being monstrous and hurting or killing others. Great read for anyone interested in diversity in the paranormal field.
Read more
Helpful
Comment Report abuse

A. Holden
3.0 out of 5 stars Disappointing
Reviewed in the United States on April 27, 2020
I was not wowed by this collection for several reasons. First, let me say I have been a fan of this author for a long time. This collection did not meet my expectations. The fact that they were shifters seemed to be not relevant to the story except for the vamp book. I can usually handle a little bit of commentary about environmental and political issues, but there were just blatantly stated opinions of the author and I find that a big no-no for me. The Dragon’s Rules was the worst of the bunch for that. Epilogue is a misnomer for the short story attached to the end of the collection. The characters were flat and not really very interesting.

I received a free copy of this book and I am voluntarily leaving my honest review.

C. B.
4.0 out of 5 stars Nice box set.
Reviewed in the United States on April 20, 2020
Bear's Legacy: I absolutely enjoyed the plot of this story.The beginning was rough, but it gets better. Lucinda, Arthur and Regina are gems. Carter, the dad is a piece of work. Arthur was abused by his dad, Carter. Carter considered brute force a sign or authority. Carter was presumably the well respected Alpha. His pack had no idea of his true abusive nature. He has a successful, well decorated tour in the Army, then as a football player. Lucinda, Sr Partner in Cortez, Semple and Pearlman, is a professional who loves the challenge of stress. Carter died unexpectedly and his will dictated Arthur take over as CEO or the company would need to be sold off. Lucinda's parents, managing partners of Cortez, Semple and Pearlman, insisted she get Arthur's signature, by any means necessary. Arthur and Lucinda played the will he/won't he game. What is behind the urgency of C/S & P? Does Lucinda seal the deal? Does Arthur go back to the company? How does Regina like the new possibilities? Nice story. The plot could have spent more type on Smythe. The epilogue didn't go far enough. Lots of elements left dangling. Good story!

Wolf's Heir: Will they? Won't they? If, when? Natalia is an Omega in the same pack as Harry, who is Hector, the Alpha's son and in line for leadership if dad ever gives up the position. Hector dangled Alpha in front of Harry, but preferred his sister Elena. Elena marries Natalia's brother Duncan. Both Natalia and Harry are contemptuous of their siblings choices. They shared a moment at the wedding, which they pretend to dislike but it stays on their minds. They both end up at Berkley and the dance continues. Interesting watching their side eyes and what ifs. The method of storytelling with the time jumps was a bit off putting. Interesting story. The miscommunications make the story funny. What unexpected conflicts will their not talking cause?

Vampire Regent: Curiosity killed the cat. Addisyn and her best friend & roommate Damiana, had a little psychic hustle. Addisyn also was able to read past, present and future events/thoughts of people that is accurate. Addisyn decides to explore the kiss-mate dating app to find out about Oscar. Oscar, vampire is drawn to Addisyn & Damiana's storefront and Doesn't understand why. He is drawn into helping one of his employees, Jade, fairy who killed a well known athlete. Addisyn, Damiana and Oscar are pursued and are in the adventure of their lives. A lot going on in this story. All three live lives skipping the lines between illegal and not nice. I find it hard to relate to Addisyn. Interesting story.

Dragon's Rules: Interesting story. Elena, worked at Kiss-Mate, but was still struggling financially. Her passion was upcycling. It involved taking discarded items, refurbishing them, restoring them as close to their original/former glory as possible. She partners with Lily, who is enrolled in nursing school. They didn't realize they would make a go of their business, so they plod on. She meets a young man, Levi, human in a dumpster under and a cop, Officer Monroe, dragon under unusual circumstances. She fast talks to de-escalate the situation and ends up taking the young man, home to feed him. Chance, her cat is friendlier toward him than he ever has been to her. When she is occupied, Levi takes off with her wallet. Not a good start to that particular day. Leo, is a frequent customer of Kiss-mate. His partner, Cortez is always trying to set him up with a friend of his wife's. He second guessed what Elena and Levi could have been doing. He is a cup half empty person. Elena is a cup half full person. They go through a few problems, conflicts involving themselves, Levi and themselves and Levi. He is a runaway, who works for Elena and doesn't attend school. More problems? Elena does complex things, for the right reasons but with no regard to legality or consequences. Can Leo, the cop leave Elena and Levi alone? Will Levi, get to avoid school? Will LIly and Elena ever find a name for their business? Nice story, more of a romance than a paranormal story. This story summary says she is a fairy and Leo a dragon, but they never go into their paranormal mode. Elena is a nice woman. Leo is a nice guy. I received an ARC from Booksprout and am voluntarily leaving a review.
Read more
Helpful
Comment Report abuse

Emily Pennington
TOP 500 REVIEWER
5.0 out of 5 stars Great Shifter Collection !!!
Reviewed in the United States on April 19, 2020
Books in this 5-book Shifter Romance Collection are: Bear’s Legacy, Wolf’s Heir, Vampire Regent, Dragon’s Rules, and Kiss-Mate Shifters Series Epilogue. Below are reviews of two of the stories to give you an idea of what you will find in this set.

*** Reviewing “BEAR’S LEGACY” ***
Arthur came from an abusive home that gave him two tasks he had to do to survive. First was to protect his sister, Regina, from their abusive father. The second was to leave his father’s pack and never look back!

After many years, he had all but forgotten his broken home life because he was successful as a solider and football player. But when his father died, his past came back to haunt him. In his father’s Will, Arthur was required to accept the CEO position at his father’s company and become Alpha of the bears. He really didn’t want it, but the law firm, not wanting to lose the account, sent Lucinda to convince him to comply. If he refuses, the business will be shut down and the employees left jobless. So more was at stake than Arthur’s pride or painful past. And there is something about Lucinda that calls to his bear – is she his mate? How will this complicate things now?

Shifter books are always my favorites, and this book didn’t disappoint. This one deals with the uncomfortable topic of abuse and its effect on the lives of people who suffer and often can’t escape what is happening to them. The characters are well-portrayed, and the reader is given hope when Arthur and Regina escape their father’s cruelty – even though that kind of past can affect the victims throughout their lives. Yet Arthur still cares for others and is ready to put their interests before his own. Will he accept the CEO job? Will he become Alpha? Will he recognize his mate? Can he find the strength to overcome his painful past? Or has he been too badly hurt to want any part of that life again?

*** Reviewing “VAMPIRE REGENT***
Addisyn is a mortal psychic. She and her partner run a fake fortune teller scam, despite her powers being real. Her handler is Donovan, but she meets Oscar Morse, a vampire, and is somehow drawn to him and he seems very drawn to her as well. Are they meant for each other? Will her attraction put her in danger?

I enjoyed this book from start to finish. The characters are well developed, the chemistry between the main characters was sizzling. The story line moved quickly from the beginning to the end, with lots going on and plenty of twists and turns. Grab your copy and see if Addy and Oscar will find their HEA.
Read more
Helpful
Comment Report abuse
See all reviews from the United States