You've subscribed to Kiss and Tell: Encounters of a Prostitute! We will preorder your items within 24 hours of when they become available. When new books are released, we'll charge your default payment method for the lowest price available during the pre-order period.
Update your device or payment method, cancel individual pre-orders or your subscription at
Your Memberships & Subscriptions
There was an error. We were unable to process your subscription due to an error. Please refresh and try again. 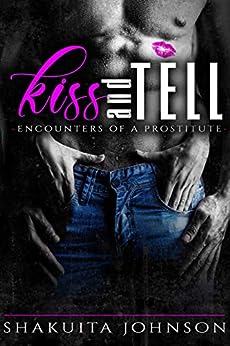 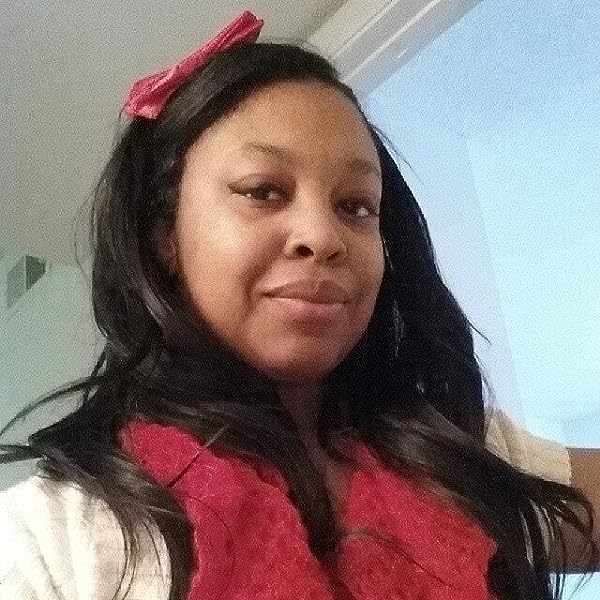 Kiss and Tell: Encounters of a Prostitute Kindle Edition 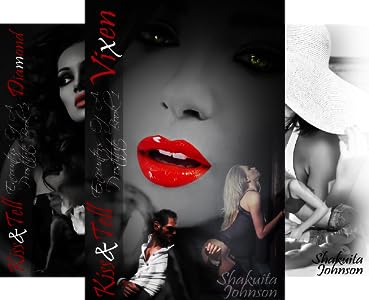 Kiss and Tell: Encounters of a Prostitute
Kindle Edition
Page 1 of 1Start OverPage 1 of 1
Previous page
Next page

Kiss and Tell: Encounters of a Prostitute - NOW AVAILABLE

Kathleen Rivest
5.0 out of 5 stars making it one of my dirty little secrets that I'll absolutely enjoy for quite some ...
Reviewed in the United States on January 5, 2016
Title: Kiss And Tell: Encounters of a Prostitute
Author: Shakuita Johnson
Series: Box Set
Genre(s): Erotica
Page Count: 187 pages
Heat Level: # 5 flames out of 5
Rating: # 5 stars out of 5
Blurb:
Clarissa is an acclaimed journalist and blogger, who sets out to show the erotic side of prostitution by writing a blog article to her followers. She speaks to six women, in six different cities, and she has them tell her one of the hottest encounters with one of their clients.

The first she interviews goes by the name of Vixen. After suffering tragedies no child should endure, she found a way to take back control of her life. She recites the hot and steamy scenes with her client Brandon.

The second she interviews is Diamond and she didn't have the easiest childhood. Having to grow up too fast and take care of her younger siblings sets the tone for the rest of her life. Diamond does whatever she has to in order to keep them all together. She reveals this along with her hot encounter with Sarah.

The fourth she interviews goes by the name Madeline and there is more to her than meets the eye. Born with the same silver spoon in her mouth as Clarissa, what reason could she possibly have to sell her body to the highest bidder? She reveals her secrets as well as her roll in the hay with Kyle.

The fifth she interviews goes by the name Star, who is still trying to overcome a trauma from her childhood. In the mist of her storm she uses sex as an escape from her life. She then recounts her encounter with the sensual couple Alexi and Niko.

The sixth she interviews goes by the name Asterisk, who left an abusive marriage and ended up on the streets with nowhere to turn. Some ladies on the streets took her in and she's not looked back since. Sit back and relax as she recounts the sexy encounter she helped facilitate between Jonathan and his boyfriend Noah.

This is the little red dress that you keep hidden in your closet and take out on special occasions to look smoking hot! You shouldn't think that the stories of prostitutes are steaming, arousing and enticing - but Kiss And Tell says otherwise, making it one of my dirty little secrets that I'll absolutely enjoy for quite some time. These six stories are absolutely hot, and if I could have added extra flames to my 5 flame ratings, I absolutely would have, simply because I couldn't figure out if these stories could have been fiction or reality [yes, they were that good]. Each story is different, the history of each woman as heart wrenching as the next and having to live with the consequences of circumstances out of their control where sex was the only thing that they could use to make fast money to feed their family. As sexually stimulating as these stories were, Shakuita Johnson has added such an emotional aspect to her novel that I couldn't help it but be moved and frankly, impressed at the fact that she's incorporated the emotional, the human, the sexual and the decadent aspects all rolled into one. This is absolutely one author that I will be following very closely in the future and adding her novels on my to be read list.

**Received a copy in exchange for an honest review. Read and reviewed by Kathleen for Alpha Book Club**
Read more
One person found this helpful
Helpful
Report abuse

Sunshine
4.0 out of 5 stars Kiss and Tell: Encounters of a Prostitute
Reviewed in the United States on October 23, 2018
Vixen, tells her story of how she became a prostitute and as would be expected it is not a happy story. Having said that she has embraced who she is and what she does.

A story not for the feint-hearted but i enjoyed reading it and have already marked the next book to read!
Read more
One person found this helpful
Helpful
Report abuse

Ebony Arrington - McMillan
5.0 out of 5 stars A great series!!!
Reviewed in the United States on July 21, 2015
I LOVED the whole idea of this series from the very beginning!! Each of these short stories are different and pull different emotions out of the reader.

I have had a very hard time picking a favorite interview...I think that it is a tie between Star and Madeline. These 2 women's stories stick out in my mind for very different reasons....Star's back story broke my heart and it just showed that people don't "choose a life of prostitution." Sometimes life just throws some curve balls and you have to roll with them. Madeline, Madeline, Madeline....Where do I even start with her. I think what pulled me into her story was her personality and attitude. She is a force of nature that is not to be taken lightly.

Shakuita Johnson has proven with this series that she can "think outside of the box" and give her readers something a little different that is still a great read. This series has heart, heat, and so much more!! I highly recommend this series and also Ms Johnson's other works!! This was a very easy five star read!!!
Read more
One person found this helpful
Helpful
Report abuse

Melissa Mendoza
5.0 out of 5 stars So sexy!
Reviewed in the United States on January 11, 2016
“My pulse increases as each succulent inch of his alabaster skin is exposed. I can’t wit to run my hands over every edible part of his body. He’s perfectly chiseled and the little V leading to his groin points directly to the place I want to see the most. As soon as he removes his pants, his impressive bulge springs out of its confinement.”

5 kiss and tell stars!!! Holy hotness, what did I just read?? This is quite a sexy little box set!!

This box set is definitely worth the read!! Each book in the box is hotter than the next! I loved the whole concept of each book! I don’t think I could even pick a favorite it I could! Each story is so hot and sexy. This is the first book I’ve read of this author, but if all her books are like this one, I’ll be looking into her others!!! Great job!
Read more
One person found this helpful
Helpful
Report abuse

Trez
5.0 out of 5 stars HOT! HOT! HOT!
Reviewed in the United States on November 29, 2015
Wonderful series! I don't usually do short stories as there is only enough story to make me mad that there isn't more. Not this time. I know the series is said to be short stories but I don't think it should be called short stories. It should be called what it is, an AWESOME series! Each encounter is just as hot as the next. I don't think of the last encounter as so much as hot as endearing. The prostitutes and their "clients" were very well written. There were several stories being told, the prostitutes encounters, the prostitutes themselves(how and why they got into prostitution) and Clarissa's. To the author I say well done!
Read more
One person found this helpful
Helpful
Report abuse

Samantha Bull
5.0 out of 5 stars LOVED IT (ARC REVIEW)
Reviewed in the United States on July 15, 2015
Ok, first I have to say WOW!!! I love this series almost as much as the Dark Indiscretion Series. Shakuita has done it again!!! While these 6 stories are shorts they are well worth the time to sit and read! The characters are well developed from the very first book and the plot holds a strong line throughout. Each short has its own variety of twists that you wont see coming!!! Not only am I impressed with that I was also impressed with the HOT STEAMY scenes!!! Talk about some dirty bits!! I HIGHLY recommend this series to anyone looking for a quick steamy read for those "I want to read, but not get stuck starting a novel" moments I know we all have. A job well done and congrats on the new releases!!!!!
Read more
One person found this helpful
Helpful
Report abuse

Nicola Wright
5.0 out of 5 stars Oldest profession
Reviewed in the United States on December 2, 2018
Wonderfully written. The backstories gave you insight on their reasoning Some women had a choice, some made a choice based on circumstances, and some were forced. But each had an incredibly hot encounter to share. Some of them may even make you think twice about the worlds oldest profession
Read more
Helpful
Report abuse

dawn
5.0 out of 5 stars Loved it
Reviewed in the United States on September 7, 2018
This book is so well written with steamy white hot passion that you can't put it down until you get to last page. This is a must read
Read more
One person found this helpful
Helpful
Report abuse
See all reviews
Back to top
Get to Know Us
Make Money with Us
Amazon Payment Products
Let Us Help You
EnglishChoose a language for shopping. United StatesChoose a country/region for shopping.
© 1996-2021, Amazon.com, Inc. or its affiliates