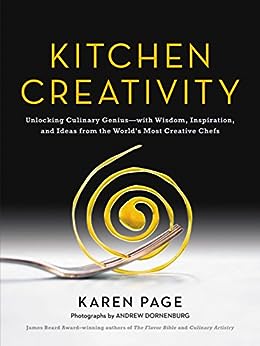 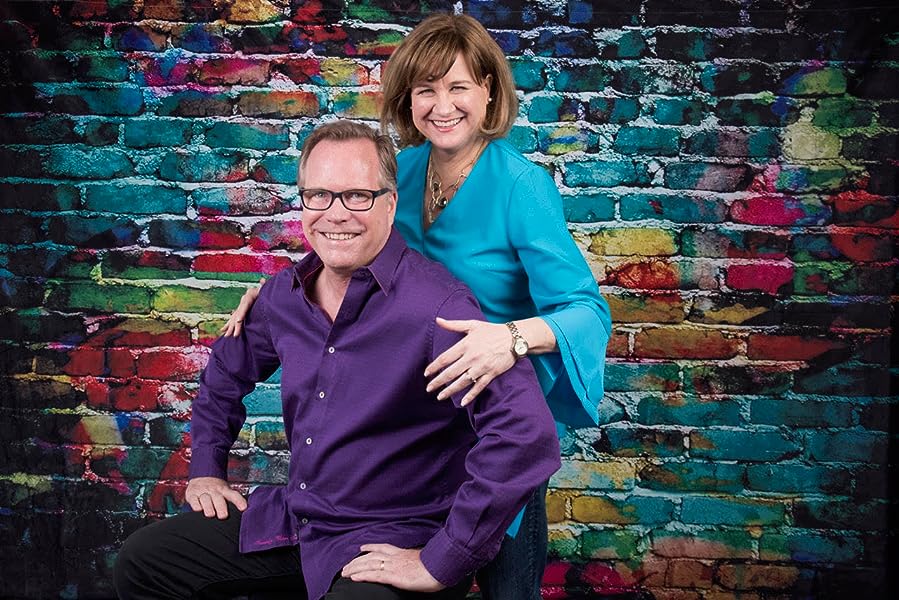 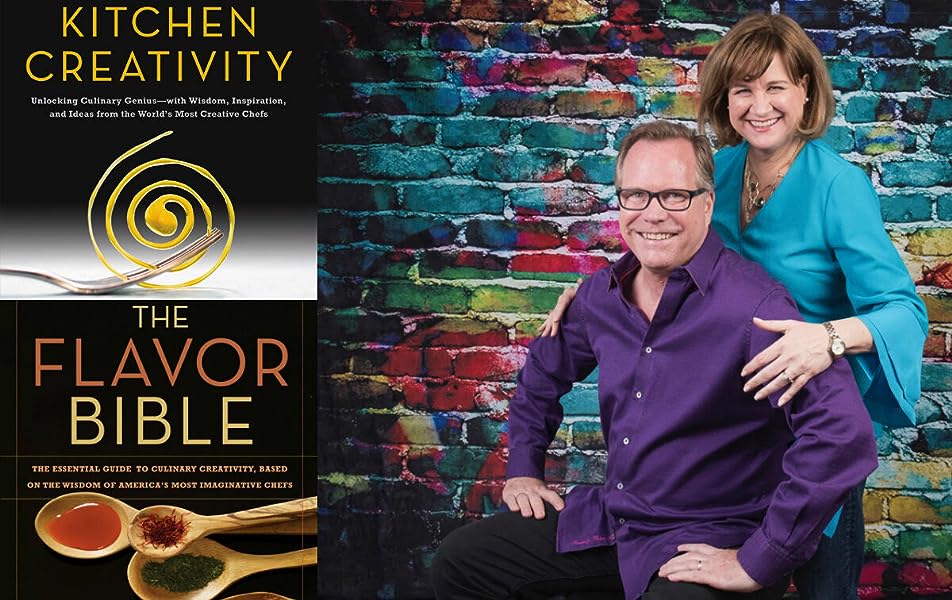 by Karen Page (Author) Format: Kindle Edition
See all formats and editions
Sorry, there was a problem loading this page. Try again.
Unlock your creative potential with the world's most imaginative chefs. In this groundbreaking exploration of culinary genius, the authors of The Flavor Bible reveal the surprising strategies great chefs use to do what they do best.

Beyond a cookbook, Kitchen Creativity is a paradigm-shifting guide to inventive cooking (without recipes!) that will inspire you to think, improvise, and cook like the world's best chefs. Great cooking is as much about intuition and imagination as it is about flavor and technique.

Based on four years of extensive research and dozens of in-depth interviews, Kitchen Creativity illuminates the method (and occasional madness) of culinary invention.

Part I reveals how to learn foundational skills, including how to appreciate, taste, and season classic dishes (Stage 1: Mastery), before reinventing the classics from a new perspective (Stage 2: Alchemy). Einstein's secret of genius-combinatory play-pushes chefs to develop unique creations and heighten their outer and inner senses (Stage 3: Creativity). Part II's A-to-Z entries are an invaluable culinary idea generator, with exercises to prompt new imaginings.

You'll also discover: experts' criteria for creating new dishes, desserts, and drinks; comprehensive seasonality charts to spark inspiration all year long; how to season food like a pro, and how to create complex yet balanced layers of flavor; the amazing true stories of historic dishes, like how desperate maitre d' "Nacho" Anaya invented nachos; and proven tips to jump-start your creative process.

The ultimate reference for culinary brainstorming, Kitchen Creativity will spur your creativity to new heights, both in the kitchen and beyond.
Read more
Previous page
Next page
Due to its large file size, this book may take longer to download

One of the Best Books of the Year - Washington Post, Shelf Awareness "Utter genius... if Leonardo da Vinci wrote a book on culinary creativity in 2017, this would be it."―Michael Gelb, New York Times bestselling author of How to Think Like Leonardo da Vinci and The Art of Connection "An instant classic, the rare book that helps the creator learn to think, not just do."―Seth Godin, New York Times bestselling author of Linchpin

"Who was that visionary who first intuited that the tasteless red berry on the bush, if processed just right, could burst into coffee? Who made that first cake? Chefs have always been an intuitive lot. The best are visionary sensualists for whom food is high lovemaking, unleashing ever new and ancient, multisensory delights. Kitchen Creativity is a walk on the wild side with today's most visionary chefs."―Rebecca Alban Hoffberger, founder and Director of the American Visionary Art Museum

"Karen Page and Andrew Dornenburg have dedicated their storied careers as gastronomic scribes--diligently researching and documenting the culture, history, science, and techniques of cooking. Not surprisingly, each one of their acclaimed books has become a must-read for professional chefs and home cooks alike. Their latest, Kitchen Creativity, proudly joins the family--generously ladling practical advice towards acing the art of culinary innovation, imbuing the reader with newfound confidence, skill, and inspiration. No doubt it will become essential in my own collection!"―Danny Meyer, CEO, Union Square Hospitality Group, and New York Times bestselling author of Setting the Table

"The hardest question I've ever been asked is: 'How do you teach someone to be creative?' Now I have a resource I can wholeheartedly recommend!"―Michael Nischan, founder and CEO of Wholesome Wave and 2015 James Beard Foundation Humanitarian of the Year

"This splendid book is the perfect roadmap for a young chef to attain culinary stardom. First, follow the great classic cooks by imitating them. Second, massage that knowledge to fit your palate and esthetic sense. Third and finally, become yourself."―Jacques Pepin, author of A Grandfather's Lesson, Emmy Award-winning television host, and recipient of France's Legion d'Honneur

"Kitchen Creativity is a book we would love to have written. A delectable mix of sensuality, intellect, insight and surprise that reveals not only the secrets of creative chefs, but of creativity itself."―MacArthur fellow Robert Root-Bernstein and Michele Root-Bernstein, authors of Sparks of Genius: The 13 Thinking Tools of the World's Most Creative People

"Just as The Flavor Bible and Culinary Artistry have been invaluable to chefs and cooks navigating the world of flavor, Kitchen Creativity promises to guide them insightfully and inspirationally through the creative process--mindful of the fact that this is something that should always be fun."―Marcus Samuelsson, chef-owner of several restaurants including Red Rooster, Ginny's Supper Club, and Streetbird, and New York Times bestselling author of Yes, Chef

"Karen Page has grasped the secrets and joys of food like no other. Kitchen Creativity is a delight of insight and inspiration that will do more than enrich your table... it will enrich your life."―Shoshanna Zuboff, Harvard Business School professor and author of Master or Slave? The Fight for the Soul of our Information Civilization

"Forget recipes. This whimsical book aims to unleash your kitchen creativity by talking about flavors and their combinations, techniques and ingredients. Learn what inspires top chefs to create their own dishes in interviews with chefs like Dan Barber, Daniel Boulud, Amanda Cohen, and Eric Ripert."―Forbes

"Page gathers insights both philosophical and practical from famed chefs... [and] points out the patterns in how great dishes come about, encouraging readers to recognize the pressures and accidents that often result in something wonderful, as well as the self-reflection and experimentation required to get you there."―Maggie Hoffman, Plate

"In Kitchen Creativity [Page] compiles the advice of successful chefs, and studies how they manage their creative lives... this book will appeal to cooks at every level, and those interested in creativity, whatever the medium."―Shelf Awareness

A former Washington Post wine columnist, she is also the author of What to Drink with What You Eat, which was named the IACP Cookbook of the Year and Georges Duboeuf Wine Book of the Year. She lives with her husband, author and photographer Andrew Dornenburg, in New York City. --This text refers to the hardcover edition.

Amazon Customer
5.0 out of 5 stars I'mBeen a chef fo And made such a passion to my passion and now it's OVER THE TOP me
Reviewed in the United States on July 30, 2021
Making great food... Loloo
Images in this review

willypickle
4.0 out of 5 stars Kitchen info. presented in a different way for chefs.
Reviewed in the United States 🇺🇸 on January 20, 2020
Verified Purchase
What's not to like about a cookbook, but this one is written to inspire the chef to think outside the box.
Read more
3 people found this helpful
Helpful
Report abuse

Footman Williams
5.0 out of 5 stars I'mBeen a chef fo And made such a passion to my passion and now it's OVER THE TOP me
Reviewed in the United States 🇺🇸 on July 30, 2021
Verified Purchase
Making great food... Loloo
Read more

5.0 out of 5 stars I'mBeen a chef fo And made such a passion to my passion and now it's OVER THE TOP me
By Footman Williams on July 30, 2021
Making great food... Loloo
Images in this review

Sar328
5.0 out of 5 stars Phenomenally informative book.
Reviewed in the United States 🇺🇸 on February 3, 2018
Verified Purchase
A must read for every serious cook/chef and anyone wanting to know more about the food they eat. Incredible information. I love cook books. This is so much more. I had to read every single word in this book because I didn’t want to miss one thing.
Read more
10 people found this helpful
Helpful
Report abuse

Kathy D
5.0 out of 5 stars Such a smart book for every chef, cook, and culinary student
Reviewed in the United States 🇺🇸 on November 6, 2017
Verified Purchase
This is such a well-written and smart book. Another great by Karen Page, I really believe this book should be in the private culinary library of every professional chef, cook, and culinary student right along side her book the “Flavor Bible”. As a professionally trained chef, I find it an absolute inspiration.
Read more
10 people found this helpful
Helpful
Report abuse

Schamarman
5.0 out of 5 stars Good job
Reviewed in the United States 🇺🇸 on September 25, 2020
Verified Purchase
I like it ! Thank you 🙏🏼
Read more
One person found this helpful
Helpful
Report abuse

Roxy
5.0 out of 5 stars Good book
Reviewed in the United States 🇺🇸 on September 6, 2020
Verified Purchase
It was a great gift
Read more
One person found this helpful
Helpful
Report abuse
See all reviews

Reid Gibson
5.0 out of 5 stars Inspirational
Reviewed in Canada 🇨🇦 on December 15, 2020
Verified Purchase
Great book for the starting cook, who doesn’t have the role model to work next with. Over the years you gain a-lot of tips and tricks and if you implement the ways of thinking in this book, you’ll be ahead of the game. Good luck aspiring F&B protege
Read more
Report abuse

Tanya sethi
3.0 out of 5 stars The book had torn edges.
Reviewed in India 🇮🇳 on March 31, 2021
Verified Purchase
The book and the cover is torn from various sides. Also there’s a marker blob on the top.
Read more

3.0 out of 5 stars The book had torn edges.
Reviewed in India 🇮🇳 on March 31, 2021
The book and the cover is torn from various sides. Also there’s a marker blob on the top.
Images in this review

Bryan
5.0 out of 5 stars Great book to up your culinary skills!
Reviewed in Canada 🇨🇦 on February 26, 2021
Verified Purchase
Very informative. Lots of useful tips and tools.
Read more
Report abuse
See all reviews
Report an issue
Does this item contain inappropriate content?
Report
Do you believe that this item violates a copyright?
Report
Does this item contain quality or formatting issues?
Report