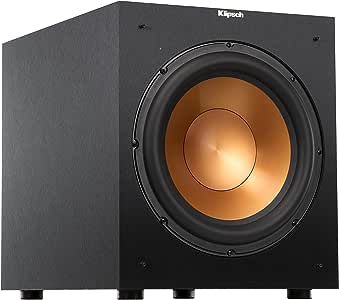 Rattle the windows and wake the neighbors with a Reference subwoofer. You've never felt your music and movies like this before.

HAPPINESS IS COPPER AND BLACK

Add robust bass impact to movies and music with the black Klispch R-12SW 12" Subwoofer. This front-firing subwoofer features a 12" copper-spun woofer and delivers up to 400W of power. With a frequency response of 29 - 120 Hz, this model is equipped to handle a wide variety of listening material. Integrated low pass crossover and phase control settings allow you to optimize the sound of the subwoofer in your listening environment. For installation flexibility, LFE and line level inputs are onboard.

4.6 out of 5 stars
4.6 out of 5
548 global ratings
How are ratings calculated?
To calculate the overall star rating and percentage breakdown by star, we don’t use a simple average. Instead, our system considers things like how recent a review is and if the reviewer bought the item on Amazon. It also analyzes reviews to verify trustworthiness.

Phil R.
5.0 out of 5 stars House Shaking Bass
Reviewed in the United States on June 26, 2016
Verified Purchase
This thing is awesome. I made a big mistake when I traded away my old Boston Acoustics XB6 subwoofer a few years ago. I purchased an Onkyo 7.1 speaker set and was using just the sub that came with it... it did okay, but bottomed out very easily. I finally decided it needed to be replaced, so I went with this Klipsch based on reviews I read here. It arrived well within the stated delivery window, and was up and running in less than 5 minutes. Let me tell you, this thing goes loud and deep. It shakes the walls! You know that scene in Game of Thrones where they blow up all of the ships? I thought it was going to wake the neighborhood! There's virtually no break-in period. It sounded great from the first minute. It's aesthetically pleasing, too. The veneer almost looks like black brushed aluminum, and the golden cone is nice to look at. And the cost is less than my old Boston that I had missed so much. Worth the buy! Go for it!

Update 9/24/16: Well, after three months of normal use, the driver developed a rattle. It sounded like wires slapping the inside of the box,so I took the driver out, taped down any loose wires I saw, and plugged it back in. Still rattled. It was the driver itself. It still put out plenty of bass, but that rattle was annoying. I contacted the seller, and they basically said, sorry. Can't help. Window is closed. Contact the manufacturer.
I asked if they were an authorized Klipsch dealer (because Klipsch's website says they only warranty items bought from authorized dealers) and got no answer. So I contacted Klipsch. They said nope, we won't honor the warranty because Bubba Goo Goods is not an authorized Klipsch dealer, and we can't vouch for them or their equipment. But, they did sell me a replacement woofer for $84. Three business days later, it arrived and I installed it. Rattle is fixed. Just wanted people to be warned. Amazon pricing is great, and we take advantage of the deals, but buyer beware. Amazon can be like the TJ Maxx of the internet. The prices are lower for a reason.

Update 5/2/18: The replacement driver I purchased directly from Klipsch is still going strong. I haven't had another issue with the sub or any of its components since the rattle incident. I am still very pleased with this sub.

Michelle Greene
5.0 out of 5 stars Just buy it, set it up, play music, pick your jaw up off the floor
Reviewed in the United States on August 17, 2017
Verified Purchase
Wow does this thing thump!! It will shake things on the other side of the house and is crystal clear.

One piece of advise. Get a good sub cable. The cheap one I had cause humming when the receiver was off.

Amazon Customer
5.0 out of 5 stars Simply Amazing!
Reviewed in the United States on September 2, 2018
Verified Purchase
I'm not just an audiophile, I record and produce music as well. I have a fairly well-equipped home studio, which includes a professional reference-level monitor system, with a very high quality (and high price-point) sub. I never thought I would hear a consumer-level sub for a home stereo system that sounds as good as my studio-grade sub. But, I was wrong. This Klipsch 12 inch sub is very impressive. Great tone, and captures not just the sound, but the feel of the lowest lows in your music and movies. Several previous reviews describe this sub as musical. I would agree, but it goes farther than that. It's hard to find a sub that produces both a "tight" bass sound, while also being "smooth." My prior home stereo sub produced a "tight" bass sound but was harsh a times and because of the smaller speaker size, would occasionally sound distorted when trying to produce the very low frequencies at nominal volume. No distortion with this sub. If you are wondering whether a 12 inch woofer it too big, it's not. The size of the speaker helps it to easily reproduce very low frequencies without distortion, and without having to crank the volume to get the effect you want.
Read more
20 people found this helpful
Helpful
Comment Report abuse

KEM
5.0 out of 5 stars Beautifully musical, not just a device to cause structural damage to the house (which is cool too)
Reviewed in the United States on March 21, 2017
Verified Purchase
I replace a 10" Klipsch Synergy down-firing sub that died. Both were louder than needed, but this one is much more musical. This was the last speaker in my system that I upgraded to the reference line. My initial fronts were KG4s from the lower end of the Heritage Line in the 90's, so not technically an upgrade on the fronts, but all the way round the rest of system. The old Synergy was jump a "thump" of varying intensity. The R12-SW adds a depth to the musical clarity of each instrument that reaches down into the bottom end. I have been collecting music since I was 13 years old, and have gone from 8-track, vinyl, cd and digital, and I am experiencing much of my music for a first time with this sub. Of course, this line is higher than the old Synergy line, so it should sound better. I understand that but was still taken aback by how wide the gap was.

As a side note, I got a great deal on this as an Amazon Warehouse Deal. The box was damaged, but the sub was not and had never even been opened. Give it a shot if you want to save a few bucks
Read more
27 people found this helpful
Helpful
Comment Report abuse

Jack black
1.0 out of 5 stars I just don't know about Klipsch anymore
Reviewed in the United States on February 27, 2020
Verified Purchase
Sorry Klipsch mine was broke out of the box called in to talk to your support all the lines was busy waited about a hour for a phone call back and the guy listen to the high pitch sound it was making trough all my other kilpsch speakers and told me I got one with a bad amp he hinted around like I'm not the first person with this problem and believe this or not when I took it back to the UPS store for the return the girl at the counter said this was the second one of these that came in this week I don't no if I want to chance getting another I love Klipsch but I went to Best buy and was looking at the Klipsch subs and the guy told me they have been getting them back also with bad amps
Read more
11 people found this helpful
Helpful
Comment Report abuse
See all reviews

Sam
5.0 out of 5 stars perfect
Reviewed in the United Kingdom on November 27, 2017
Verified Purchase
I live on the fourth floor of my university accommodation. You can feel the main door shake all the way on the first floor. The only downside to this product is that I keep getting emailed noise complaints... whoops.
Read more
3 people found this helpful
Report abuse

Amazon Customer
5.0 out of 5 stars Great SW
Reviewed in Canada on March 29, 2019
Verified Purchase
It is a excellent addition to our surround system. Klipsh speakers have always been a fantastic choice. Quality and performance has never been an issue.The Bass in my entire system is earthshattering coupled with tremendous horn driven highs. If you are watching Jurassic Park and want to feel the floor vibrate when TREX, walks as if he is in the house, Klipsh equipment is phenomenal. I also own Klipsh Cornwalls , 2 sets of towers, center speakers and surround speakers. All you need is a quality amp that puts out a solid 100W+ per channel for their equipment such as a Denon or Pioneer to make your Klipsh system shine. Beware of many amps that advertise huge watts per channel and then give you a combined watts per channel that is much lower. Read your reviews if you are running a big system.
Read more
2 people found this helpful
Report abuse
See all reviews

Page 1 of 1 Start overPage 1 of 1
This shopping feature will continue to load items when the Enter key is pressed. In order to navigate out of this carousel please use your heading shortcut key to navigate to the next or previous heading.
Back
Next
Pages with related products. See and discover other items: home theater front speakers, front speakers for home theater, high efficiency speakers, reference speakers, subwoofer crossover, subwoofer driver