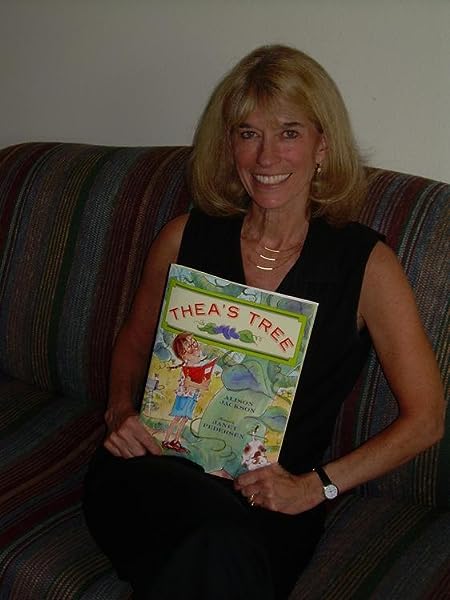 by Alison Jackson (Author), Judy Schachner (Illustrator)
4.7 out of 5 stars 766 ratings
Teachers' pick
See all formats and editions
Sorry, there was a problem loading this page. Try again.

I know an old lady who swallowed a pie, a Thanksgiving pie, which was really too dry.

And with that the feast begins! After the pie the old lady swallows a whole squash, all of the salad, and the entire turkey! As Mother and Father watch in shock, the two children are delighted to see the old lady growing fatter and fatter. And, in the end, the old lady makes a surprising and humorous contribution to the holiday festivities.

The illustrations freshen up the old cumulative chestnut. "The old lady herself is a tour de force of visual slapstick," wrote PW. "Even the typography joins the fun." Ages 3-8.
Copyright 2002 Reed Business Information, Inc.

Alison Jackson is the award-winning author of many picture books and novels including I Know an Old Lady who Swallowed a Pie, If the Shoe Fits, and Eggs Over Evie. She lives in Salinas, California.

Best known for her Skippyjon Jones series, Judy Schachner has illustrated many of her own stories, including the much-loved Grannyman and its companion book, Bits & Pieces. She lives in Swarthmore, Pennsylvania

Alison Jackson has been a children's author for over twenty years. As a children's librarian she became aware of the needs of young readers, along with their interests, and she has been writing for them ever since. Her most popular book, I KNOW AN OLD LADY WHO SWALLOWED A PIE, is a humorous Thanksgiving take-off on the children's song, "I Know an Old Lady Who Swallowed a Fly," in which her little old lady consumes nearly everything she sees on Thanksgiving Day. THE BALLAD OF VALENTINE, a Valentine's Day spin-off from the song, "Clementine," appeared on the New York Times Best Seller's list, and her most recent novel, EGGS OVER EVIE, has received starred reviews in both School Library Journal and the Bulletin of the Center for Children's Books. Her next publication, WHEN THE WIND BLEW will be out in January, 2013. It is a variation on "Rock-a-Bye,Baby", in which the wind blows the baby right out of the tree and onto the roof of a shoe house, belonging to the "Old Woman who Lived in a Shoe." The unpredictable wind rearranges many familiar nursery rhymes before finally shifting and setting everything right.

Amazon Customer
3.0 out of 5 stars Not bad but not great
Reviewed in the United States on August 27, 2020
This was a nice book. The ending was cute that she turned into a float at the macys day parade. I didnt like how there wasnt a reason she kept swallowing things. It just kept saying 'she swallowed --- to go with the ---" over and over.
Images in this review

Love the Lake
4.0 out of 5 stars this book is so much fun! it is very clever
Reviewed in the United States on August 27, 2014
Verified Purchase
this book is so much fun! it is very clever...great book to give to a child around thanksgiving time as it talks about all the things that might wind up on your thanksgiving day table...and concludes with the big parade! the illustrations are chaotically fun and colorful and the rhyming is entertaining as the story unfolds. the only reason i'm not giving it five stars is...every page ends with..."Perhaps she'll die!"...which is of course is the way the poem goes. But, i would much preferred the author to say, for example, "She swallowed the cider to moisten the pie, the Thanksgiving pie that was really too dry...WE DON'T KNOW WHY"...instead of "perhaps she'll die".

Other than that...lots of fun!

T & D
3.0 out of 5 stars Not bad but not great
Reviewed in the United States on August 27, 2020
Verified Purchase
This was a nice book. The ending was cute that she turned into a float at the macys day parade. I didnt like how there wasnt a reason she kept swallowing things. It just kept saying 'she swallowed --- to go with the ---" over and over.
Read more

T & D
3.0 out of 5 stars Not bad but not great
Reviewed in the United States on August 27, 2020
This was a nice book. The ending was cute that she turned into a float at the macys day parade. I didnt like how there wasnt a reason she kept swallowing things. It just kept saying 'she swallowed --- to go with the ---" over and over.
Images in this review

Mrs. ivr
5.0 out of 5 stars Thanksgiving!
Reviewed in the United States on December 26, 2012
Verified Purchase
I had to borrow this book this year and finally, I ordered it.. Thanksgiving is not the same w/o it (to me) and I could not find it at home or in the library. My 5 year old kids acted like they had never heard the story before (they have heard it since they were 3 years old) AGAIN, AGAIN, AGAIN,...
We made a large card board cut up of her. We cut her a stomach and gave her our favorite types of food. We put them in sequence - first, next, finally, etc. We were Thankful to add her to our food discussion.

Matthew_b85
5.0 out of 5 stars Great book!
Reviewed in the United States on December 6, 2015
Verified Purchase
This is a great book. My 3&1/2 year old son loves it. We read a lot of books and this one has already been ready many times. We can pretty much recite the whole thing. Must say though, maybe instead of, "Perhaps she'll die" the author could of used something less grim. I don't mind it but for people who do, just know that "Perhaps she'll die" comes after each and everything she swallows.
Read more
2 people found this helpful
Helpful
Report abuse

janet smith
5.0 out of 5 stars Fun book for toddlers and kids to age 10 or so
Reviewed in the United States on January 6, 2020
Verified Purchase
Love these books. Used them for years teaching kindergarten and now in retirement with my grandchildren
Read more
2 people found this helpful
Helpful
Report abuse

Meghan
1.0 out of 5 stars Says die over and over
Reviewed in the United States on November 25, 2021
Verified Purchase
Not a great book for kids.. every page says perhaps she’ll die….
Read more
One person found this helpful
Helpful
Report abuse
See all reviews