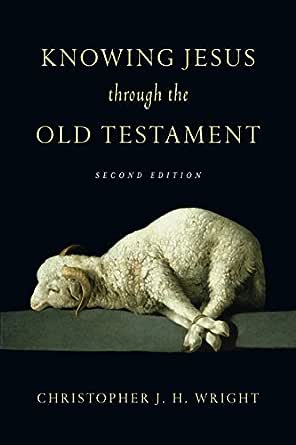 Flip to back Flip to front
Audible Sample Playing... Paused   You are listening to a sample of the Audible narration for this Kindle book.
Learn more
ISBN-13: 978-0830823598
ISBN-10: 083082359X
Why is ISBN important?
ISBN
This bar-code number lets you verify that you're getting exactly the right version or edition of a book. The 13-digit and 10-digit formats both work.

Christopher J. H. Wright (PhD, Cambridge) is the international director of the Langham Partnership International. He is the author of Old Testament Ethics for the People of God and The Mission of God.

4.8 out of 5 stars
4.8 out of 5
110 global ratings
How are ratings calculated?
To calculate the overall star rating and percentage breakdown by star, we don’t use a simple average. Instead, our system considers things like how recent a review is and if the reviewer bought the item on Amazon. It also analyzes reviews to verify trustworthiness.
Top reviews

JMD
3.0 out of 5 stars Misleading Title - Not really an OT exploration
Reviewed in the United States on November 26, 2018
Verified Purchase
The title of this book is not quite accurate. This book is better characterized as a NT character study of Jesus with references to the OT. You will not find any discussion of the mercy seat, or even Passover, except as it occurs in the NT. You will not find any mention of the blood-stained High Priest of Lev 4 carrying the unbearable burden through the camp to the outskirts to deal with sin. No discussion of Cain and Abel. Very cursory handling of Isaac. As a NT character study, it's fair. But as an OT exploration, this book will not get you there.
Read more
32 people found this helpful
Helpful
Report abuse

Joshua A McBride
5.0 out of 5 stars A Solid Work
Reviewed in the United States on August 8, 2020
Verified Purchase
Christopher Wright does an excellent job rooting Jesus in his Old Testament context and demonstrating how the early church saw him in that light. The work itself is fairly accessible, it doesn't rely on previous engagement with the ideas contained within but is informative enough that unless you've spent considerable time parsing through all the intricacies of the Old Testament implications in the new you'll find some great new information. I'll talk briefly about what I considered to be the strongest chapters in the book.

Wright's discussion of the Old Testament identity of Christ is powerful and helpful in many ways. Wright asks a poignant question at the beginning of the chapter, simply writing, "But who was Jesus?" (109). A simple question with vast implications. He anchors Jesus in his identity as God's son by referencing Psalm 2:7 and its tie to the Davidic line and its later messianic readings and by anchoring him as the promised son, as an anti-type to Isaac, who was Abraham's promised son (112). Wright goes onto talk about typology and how it should be understood before branching out more widely to discuss what a Father-Son dynamic would have looked like in Israelite culture and later Jewish interpretation. In general, this is a powerful chapter for understanding the context of the dynamic between Jesus and his Father, but more specifically, it gives some highlights for how we can understand Jesus' mission and what it means to be a member of God's family.

The ethics and values of Jesus are based in his reading and understanding of the Hebrew Bible. Wright at one point writes, "In short, to 'love your neighbor as yourself' (Lev. 19:18, 34) is not a revolutionary new love ethic invented by Jesus. It was the fundamental ethical demand of Old testament holiness, which Jesus reaffirmed and sharpened in some cases." (202). Here Wright lays out how the Old Testament's seemingly harsh laws for holiness should be understood and how they deeply influenced Jesus. One cannot say, "I love the loving message of Jesus but hate the harshness of the Old Testament." That sentence is incompatible, as all of Jesus' message has its root in the Old Testament. The Old Testament when properly understood is shown to be heavily concerned with the question of justice and love, far and above that of perceived religiosity and self-righteousness.

JuneMoon360
5.0 out of 5 stars Knowledge is God's gift.
Reviewed in the United States on January 12, 2018
Verified Purchase
This book is for the serious student who wants to learn about Jesus lineage. It out lines, the what, how and why our Lord God choose the Jews to bring our Savior into the world. It has a lot of meat to sink your brain into and will challenge you to think more deeply about God's amazing patiences in dealing with our human weakness. He never gives up.
Read more
8 people found this helpful
Helpful
Report abuse

Edward Springer
5.0 out of 5 stars Jesus is for Real
Reviewed in the United States on May 19, 2020
Verified Purchase
What a good read! Some knowledge of Old and New Testament is required. This is richly rewarded by Professor Wight's friendly, knowledgeable and methodical connection of OT themes with Jesus the messiah. It was a religious experience reading this book.
The bonus is each chapter has a review and application questions for in depth study either as a group or serious self-study.
Read more
2 people found this helpful
Helpful
Report abuse

Cameron M. Fultz
4.0 out of 5 stars A good springboard
Reviewed in the United States on December 6, 2019
Verified Purchase
I like how the book directs us to see Jesus in the OT, because that is how the early church did it. Their Scriptures were the OT / TaNaKh. The early church saw Jesus pictured in the OT stories. Thus, as you see these Jesus Pictures in the Bible, you can begin to know and discover what the early church did as in Luke 24.
Read more
One person found this helpful
Helpful
Report abuse

Kim Harris
5.0 out of 5 stars does an excellent job in this book showing how Israel and Jesus ...
Reviewed in the United States on May 4, 2017
Verified Purchase
Over the last few years my eyes have been opened to the parallels between the books of Exodus and Matthew. As my Old Testament knowledge increases the richness and depth of the New Testament becomes that more alive in my life and teachings. Christopher Wright, does an excellent job in this book showing how Israel and Jesus were both to be blessings to the nations. Through each of them, God's grace to mankind is given. "As the Messiah of Israel he could be the Savior of the world." As a pastor I will be doing some self-examining in order to ask, "how much of a blessing my life and our congregation is to our community, county, state, and to the ends of the earth"?
I will most definitely be reading much more of Christopher Wright!
Read more
3 people found this helpful
Helpful
Report abuse
See all reviews

G.O.M.
5.0 out of 5 stars A wonderful updated reissue
Reviewed in the United Kingdom on October 22, 2015
Verified Purchase
An excellent overview of the OT and how it's teaching was brought to life by Jesus, the One it points towards. An excellent book for new Christians who want to get a handle on the Old Testament. I bought it years ago but am enjoying using it again with the updated study guide.
Read more
2 people found this helpful
Report abuse

Richard Wadsworth
5.0 out of 5 stars Thought provoking, worship provoking, theologically robust, readable, profound and understandable.
Reviewed in the United Kingdom on August 7, 2015
Verified Purchase
Thought provoking but also worship provoking. Theologically robust and very readable. Profound yet simple enough for the "ordinary" person to understand. This book provides a deeper understanding of the ministry of Jesus and the purposes of God, and left me in awe of God's wisdom in His ways of revelation of Himself.
Read more
2 people found this helpful
Report abuse