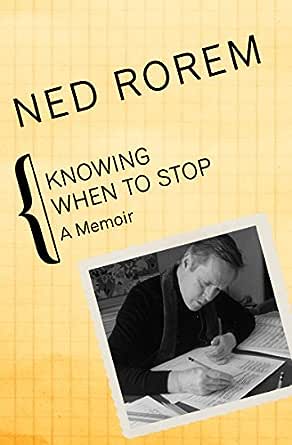 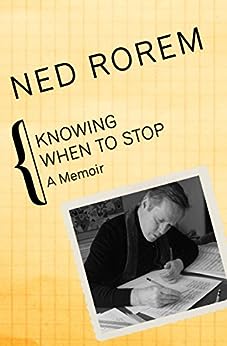 Knowing When to Stop: A Memoir Kindle Edition

Rorem is arguably this century's finest American composer of art songs--but better known to readers as the author of the remarkably candid, irresistibly readable The Paris and New York Diaries. Admitting he was a ravishing youth, he scandalized 1940s New York and Paris by his nonstop drinking and avid sex with any man who would share his sheets. He writes brilliantly, illuminating what could be dull moments with unknown people--as well as offering marvelously frank portraits of household names, among them Jean Cocteau, Aaron Copland, Jerome Robbins, Martha Graham, Truman Capote, Virgil Thomson, Igor Stravinsky, Billie Holliday and Paul Bowles. All this, and a constant flicker of outrageous opinions too. One reads on, paralyzed with pleasure by the flashing intelligence, the exact, colorful mot , the endless quotability. Why a memoir, and what does it add to the diaries--especially since it covers only Rorem's first 27 chock-a-block years? "A memoir is not a diary. Diaries are written in the heat of battle, memoirs in the repose of retrospect." So the reader enjoys not only a whirlwind picture of bohemian artistic life during and just after WWII, but a touching self-portrait of an elderly semi-recluse, happily "married" now for decades, utterly abstemious of booze, reliving a madcap youth with only occasional regrets. The reader also enjoys Rorem's quotability: "Minor artists borrow, great ones steal. All art is theft." "People seldom change as they age, they just get more as they always were.""I compose as I do because no one else is making quite the sound I need to hear." Rorem has marvelous fun classifying everything as either German (which he dislikes) or French (which he loves). "This book fails," he concludes, "because it is all Content without Style, and Content is German while Style is French." Wrong. His memoir overflows with both. Photos not seen by PW.
Copyright 1994 Reed Business Information, Inc. --This text refers to an out of print or unavailable edition of this title.

Celebrated American composer Rorem has written a contemplative, touching, funny, occasionally shocking memoir covering the first 27 years of his life. The reader becomes an invited guest in legendary parlors as Rorem tells of his life and the circles of which he was a part. Billie Holiday, John Cage, Eugene Istomin, Leonard Bernstein, Aaron Copland, Virgil Thomson, Samuel Barber, Martha Graham, Alfred C. Kinsey, Truman Capote, and Jean Cocteau are among those Rorem discusses. Spiked with introspection, these reminiscences serve as his vehicle for exploring in print the questions that he has pondered all his life. The result is well written, though parts of this book plod as Rorem, by his own admission, attempts to include what he thinks should be in a memoir. Nonetheless, Rorem provides a clear window for those who wish to peer into the artistic period of time that he and his associates claimed. Recommended for public and academic libraries.
Kathleen Sparkman, Baylor Univ., Waco, Tex.
Copyright 1994 Reed Business Information, Inc. --This text refers to an out of print or unavailable edition of this title.

Wordy half-a-life story by tireless composer and tiresome raconteur and diarist Rorem (The Nantucket Diary, 1987, etc.). Rorem is one of the great 20th-century composers of art songs: brief, pithy, and often witty compositions that have become a fixture in the vocal repertoire. Sadly, his writing is as verbose and overwrought as his music is to the point. In this bulky tome, he is only able to recount the first three decades of his life, up to 1952. Raised in Chicago, he devotes the first third of the book to his young life, mostly focusing on his precocious gay cruising in the city's parks. The narrative then turns to music school at Curtis and Juilliard; his early days in New York City; and his artistic roamings in postWW II Paris and Morocco, where he encountered such luminaries as Leonard Bernstein, Virgil Thomas, Jean Cocteau, Tennessee Williams, and Paul Bowles. Rorem is such an egotist that his portraits, even when sympathetic, are often reduced to sometimes pithy, sometimes annoying aphorisms (Bernstein ``forever combined generosity with competitiveness''; John Cage is ``a fake...but a fake what?''). When he's not expounding barstool philosophy (``the artistic tendency is not there from the start...what is there...is the gene of quality'') or overblown, ponderous prose (``I examined the world in a grain of sand, the civilizations in the furrows of that porous brick an inch from the eye, and wept at the limitless melancholy latent in this new perspective''), he's offering a catalogue raisonn‚, as it were, of his sex life--and incidentally of his musical works. His attempts to explain away his often blatant anti-Semitism and his use of coy asides (``I never told Dora, and hope you won't tell her now'') are just two of this memoir's more irritating features. A Ror-ation full of sound and fury, signifying nothing. Stop already. (b&w photos, not seen) -- Copyright ©1994, Kirkus Associates, LP. All rights reserved. --This text refers to an out of print or unavailable edition of this title.

“The scintillating chronicle of how a gifted, remarkable, good-looking young man from the Midwest grew into a leading American composer, one of our finest craftsmen of art songs.” —Time
“Extraordinary and paradoxical . . . consistently absorbing and provoking.” —The Washington Post Book World
“A contemplative, touching, funny, occasionally shocking memoir. . . . Recommended.” —Library Journal

Ned Rorem is one of the most accomplished and prolific composers of art songs in the world. Drawing on a wide range of poetry and prose as inspiration, his sources have included works by Walt Whitman, W. H. Auden, Paul Goodman, Frank O’Hara, Gertrude Stein, Adrienne Rich, John Ashbery, and Paul Monette. In 1976, Rorem received the Pulitzer Prize in Music for his orchestral work Air Music. His prodigious literary accomplishments include the publication of thirteen books, nine of which were released as ebooks by Open Road Media in the summer of 2013. Rorem lives in New York City.
Read more